Using a remarkable stellar triple system — PSR J0337+1715, a millisecond pulsar in a 1.6-day orbit with a white dwarf, the pair in a 327-day orbit with another white dwarf — we were able to produce a stringent test of the universality of free fall: in spite of the pulsar's extreme self-gravity, it and the inner white dwarf fall with the same acceleration in the outer white dwarf's gravity, at the level of three parts in a million.
Anne Archibald
Postdoctoral researcher, Anton Pannekoek Institute
Follow
Like Liked by Paul Woods
1

From the moment I figured out how to model the three-body interactions — by directly integrating the equations of motion — Paulo Freire was insistent: this would be a fantastic system to test the strong equivalence principle. I agreed; after all we had the pulsar's very strong gravity to make sure any effects were large, and we had the outer companion pulling on both the pulsar and the inner companion, to allow a direct comparison of their accelerations. In principle, it wasn't even very difficult: once I had updated the physics to include post-Newtonian effects we had a timing model for the system. In addition to all the system orbital parameters, it depended on the fractional difference Δ between the gravitational and inertial masses of the pulsar. So we should be able to fit for all those parameters at once, and the value and uncertainty of Δ would tell us whether we agreed with Einstein. Unfortunately the answer was no: our value of Δ was five sigma away from zero.

Having an apparent discrepancy with Einstein's theory was not a comfortable place to be. I was faced with two possibilities: either Einstein was wrong, or I was wrong. And in this situation, there is a strong Bayesian prior — I wanted a lot more solid evidence before I'd be willing to claim a discrepancy with Einstein. I had just watched the OPERA fiasco unfold: the OPERA group had published a paper that was as careful as one could wish, explaining that they had a discrepancy that they couldn't explain, and requesting that someone find the problem in their experimental setup. But the press coverage was all about faster-than-light neutrinos, and when the problem was found the experiment was famous only for being wrong. I didn't want to be the next OPERA. But I had this discrepancy.

Fortunately, I had data of high enough quality — especially the data from the Arecibo observatory — that I could tell that the different telescope subsets were discrepant with each other. So the discrepancy clearly wasn't real. But I still didn't know why it was happening, and people — not just Paulo, the word had got out — were very eager to hear our result. So I gave a number of talks soliciting advice on possible systematics. The gravitational-wave people I consulted on whether and how to include gravitational-wave losses in the physics (of course you can't get losses from a Lagrangian; fortunately they're too small to matter). Some white-dwarf folks I asked about whether tidal effects might be the problem (also too small). We carried out a VLBI campaign, and I talked to those folks about whether subtle astrometry effects might be the problem (wrong timescale, it turns out). I had a document, "The Case of the Discrepant Delta", listing everything I could think of and ruling almost all of them out. And when I gave talks, I was always very careful never to put the discrepancy with general relativity on a slide without also putting the discrepancy between telescopes — I really didn't want a theorist getting all excited and explaining the discrepancy I was seeing.

In the end, I have a couple of candidates for what the problem might be, including kabouters (little men in red hats who hide in the Dutch woods and make mischief) but we couldn't fix the discrepancy. What we did instead was identify the signal we were looking for — a discrepancy with general relativity should look like a sinusoid with a specific period around 0.8 days — and Nina Gusinskaia wrote some code to look at the strengths of sinusoids with very similar periods as a way to estimate how much the unknown systematics were contaminating our estimate of Δ. This finally established that our result was consistent with general relativity, and even with this larger uncertainty, our result is still substantially the best test of the universality of free fall to date.

Paul Woods
over 4 years ago

Great work and a fascinating story (I particularly like "Having an apparent discrepancy with Einstein's theory was not a comfortable place to be"!). Thanks for posting it. 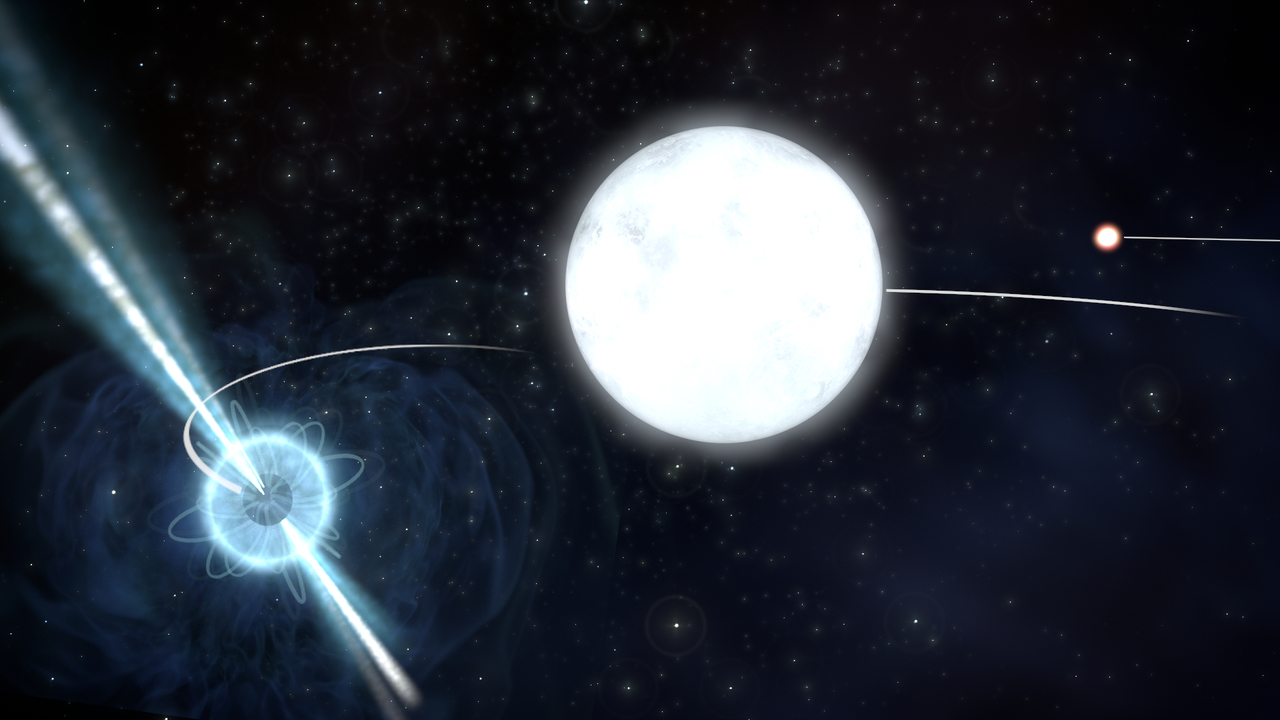 Using a remarkable stellar triple system — PSR J0337+1715, a millisecond pulsar in a 1.6-day orbit with a white dwarf, the pair in a 327-day orbit with another white dwarf — we were able to produce a stringent test of the universality of free fall: in spite of the pulsar's extreme self-gravity, it and the inner white dwarf fall with the same acceleration in the outer white dwarf's gravity, at the level of three parts in a million.