The first saga: forming the building blocks for planets

The Atacama Large Millimeter/submillimeter Array (ALMA) is the most sensitive interferometer currently available. It allows us to study the physical processes that take place during the early stages of star and planet formation in exquisite detail. One of the details is the amount of the unseen material. Poster image by Daria Dall` Olio.
Daniel Harsono
Postdoc, Leiden Observatory
Follow
Like

Our paper focuses on the molecular gas emission toward the young protostellar system TMC1A. The dataset contain deep observations of Carbon Monoxide (CO) taken with ALMA in its longest configuration (16 km) and the data was in fact first published in a Nature article in December 2016: “Resolved images of a protostellar outflow driven by an extended disk wind”. The main result of that paper was the resolved images of the outflow launching region; the original objective of the proposed observational program. The present publication focuses on the Keplerian disk itself.

Already in 2016, we noted a “bump” or “shoulder” in the dust continuum image, but it was -- at that time -- not clear to us what could cause it. I thought that it was an imaging artefact while the others tried to convince me otherwise. For that reason, I took a more careful look at this feature when taking up my current position at the Dutch ALMA regional center Allegro. One of the expertises available in Allegro is improving the phase stability of long baselines observations. The data was greatly improved after properly applying the corrections (a factor of 4 in signal-to-noise in the dust continuum emission) compared to what was already published in 2016. To us, that felt like obtaining extra observational time. The dust continuum feature remained and came out more pronounced than in previous images. Shortly after the new images were finished, I started the work on a paper to report these new results.

Another feature that is present in the ALMA data is the absence of 13CO and C18O molecular emission close to the protostar. Back in 2016, there were no attempts in characterizing this molecular gas hole and it was not clear to us what the implications were. I initially assumed that this was expected since the disk is optically thick. It should be predicted by the models once the physical structure was set from the dust continuum. As such, we concentrated in understanding the dust emission and the physical mechanisms that produce the kink. The molecular gas emission was only simulated when a decent physical structure was in place. To our big surprise, it was not that easy to understand the absence of molecular emission in the central region. Our models showed that it should be there! All of the models overpredict the molecular gas emission despite our attempts to explore both physical and chemical processes.

As in many research projects, we of course encountered some setbacks along the road. One such setback was that the hard drives suffered a major crash in February 2017. It took us about a month to re-calibrate and produce new images. In fact, the data were lost twice before the draft paper was fully written. A good thing coming out of this was, however, that we had plenty of time in advancing the modelling aspects. 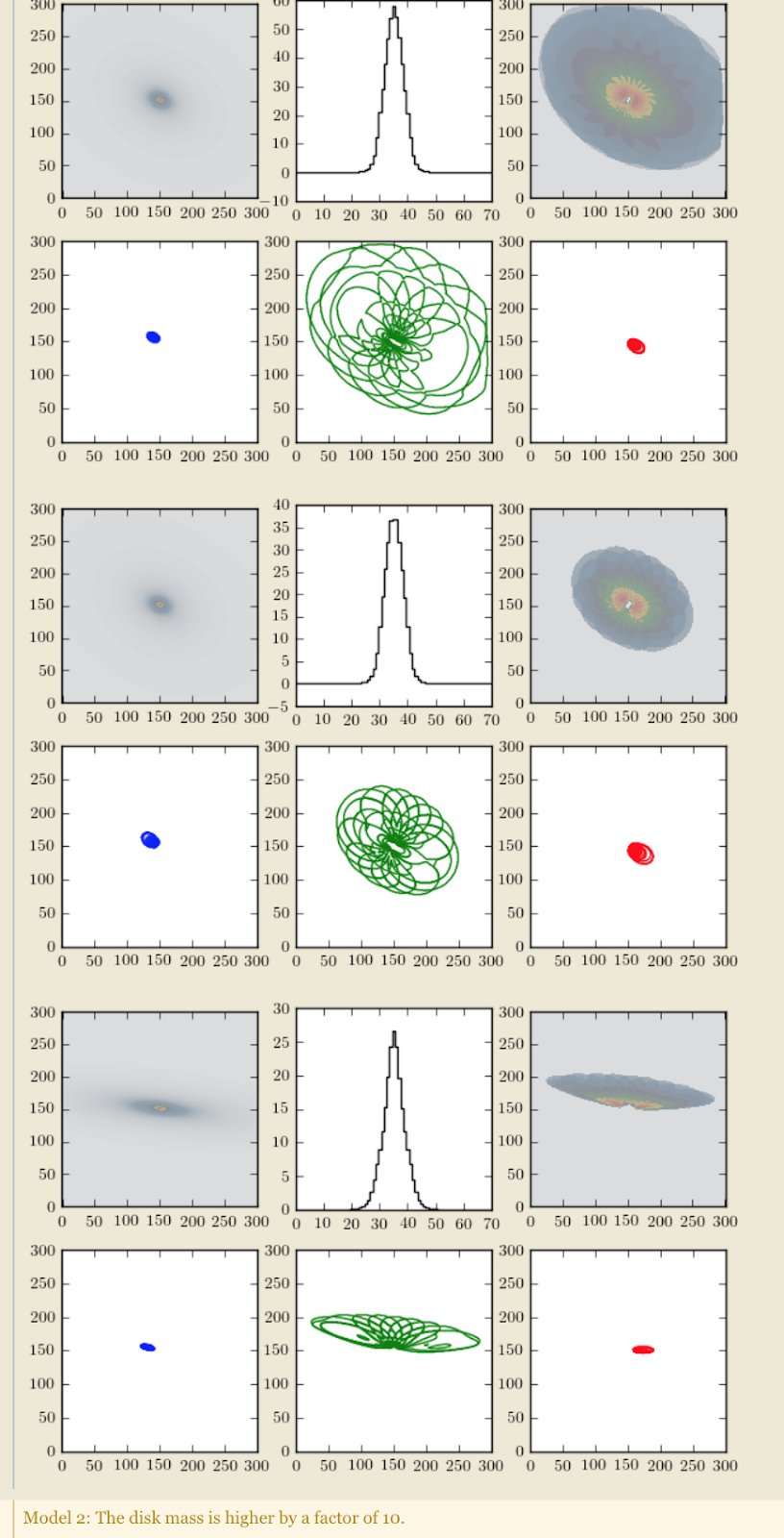 One python notebook to keep track all of the models.

After noting the difficulties in reproducing the molecular gas hole, the focus of the paper shifted. Numerous disk structures were explored to explain both the dust continuum and molecular gas emission. One scenario that stood out was to include a population of millimeter sized grains. In fact, this was the only reasonable scenario we could come up with. It really struck us by surprise that dust grains can hide such a significant fraction of molecular emission despite the high molecular abundance. Also, these large grains are present on Solar System scales which makes the result very interesting and truly novel.

The presence of large grains in the high density regions of young disks is one of the requirements for planet formation. The fact that we observed this in such a young protostellar system while the disk itself is still being assembled is fascinating. Only then is there enough material available to form massive gaseous planets, such the ones we find in our own Solar system, but also elsewhere in thousands.

The paper in Nature Astronomy is here: https://go.nature.com/2MXzQeR 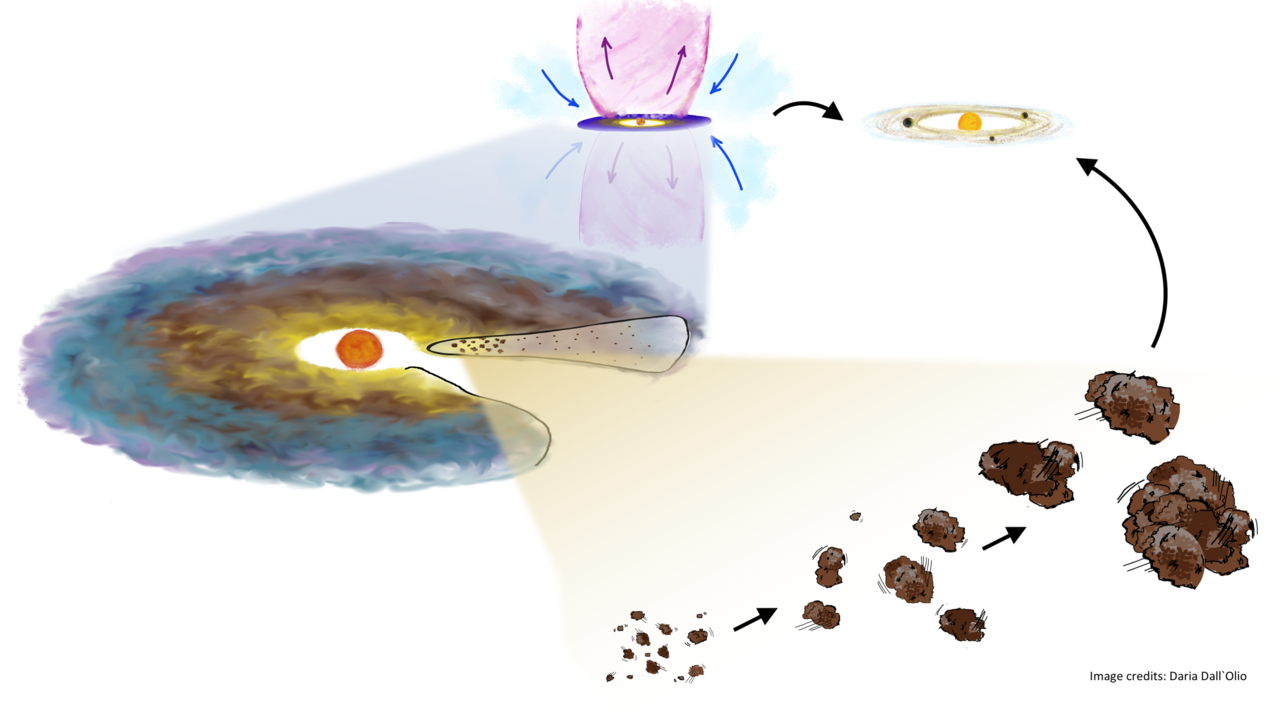 The first saga: forming the building blocks for planets

The Atacama Large Millimeter/submillimeter Array (ALMA) is the most sensitive interferometer currently available. It allows us to study the physical processes that take place during the early stages of star and planet formation in exquisite detail. One of the details is the amount of the unseen material. Poster image by Daria Dall` Olio.