The densest nodes of the cosmic web

With gravitational lensing, we can probe the mass of every kind of astronomical object, from planets to the universe as a whole. We studied the matter distribution of the environment around a galaxy cluster, including near halos, filaments, and accreting matter

The paper in Nature Astronomy is here: go.nature.com/2N5f0tv

This project started just after realising that I did not know. In 2013, I was visiting Giovanni Covone at my alma mater, the “Federico II” in Napoli, and looking to some results on his screen. We were studying weak gravitational lensing by galaxy clusters and analysing the deformation of the shape of galaxies due to foreground halos. There was this bump in the stacked lensing profile measured at very large radii from the lenses. We did not expect to see any signal, we wanted just to test our algorithms. We were really puzzled and, as smart as we are, we thought of the usual suspects: systematics!

Luckily, Martin Kilbinger was visiting Giovanni too. He explained us that the bump was supposed to be there. It is the so called “2-halo term” and it is due to the correlated matter around the lens, that is neighbouring halos, filaments connecting them to the cosmic web, and accreting matter. That made us curious.

The signal is so tiny that to see it you have to put together data from hundreds of clusters. The signal had been mostly measured around halos as large as galaxies but only very rarely around galaxy clusters. That was interesting and we started to work on this topic.

The research I enjoy the most comes from unannounced ideas. Most of the times, that genius idea you had is just a reminder that you should go to bed earlier, but sometimes you find something.

Later on in 2017, working at INAF-OAS  and “Alma Mater Studiorum”, that is the University of Bologna, I asked myself if the signal could be detected around single systems. I was studying the galaxy clusters detected by the Planck satellite in the sky portion covered by the legacy surveys CFHTLenS (Canada France Hawaii Telescope Lensing Survey) and RCSLenS (Red Cluster Sequence Lensing Survey). These clusters represent the most massive halos of the universe. The best candidate to target was PSZ2 G099.86+58.45, the highest redshift cluster of the sample. This clusters lies at the center of a very large field with high-quality data, and the lensing signal can be collected out to very large radii.

I could then measure the signal and the signal turned out to be much larger than expected. It took just few minutes to measure the signal, but it took weeks to understand whether the signal could be a fluke. Astronomers can be very critic and they are mostly critic towards their own work. Or at least, they should be. Or at the very least, I am.

The signal proved true, or that was what we made the three referees believe, and we came up discovering one of the highest density nodes of the cosmic web. Future survey should enable us to measure these signals routinely, opening a window on a new mass and length scale. The environment around clusters is out of equilibrium. Matter is still settling in. Direct observations of such systems will tell us a lot on the formation and evolution of the cosmic structure.

I really appreciated the editorial work made by professionals (I am not used to it) and the insightful suggestions by the referees, even that third referee that at some point started to make pointless comments.

Astronomy can be a lot of fun, you can be really free to make your mind wonder. Astronomy is sharing too. Our work was mostly based on public archives, provided by people who made their work available to the whole community.

So behind this paper, there are ignorance, luck, curiosity, effort, sharing, a couple of alma maters, and three referees.

The poster image was produced by Anna Serena Esposito. 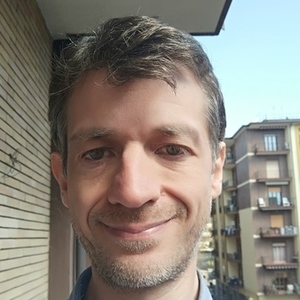