Can we decipher the Andromeda galaxy's merger history?

Can we ever decipher the merger history of an external galaxy from its stellar halo? Yes, we can! The large metal-rich stellar halo of the Andromeda galaxy suggests that it merged with a large metal-rich galaxy (M* ~ 2e10 Msun) about 2 Billion years ago leaving behind a trail of debris including possibly M32, much of the inner stellar halo and the giant stellar stream. Surprisingly, this disrupted galaxy was the third largest member of the Local Group after the Andromeda and Milky Way galaxies.
Richard D'Souza
Postdoc, University of Michigan
Follow

This paper is published here.

Although the stellar halos of nearby galaxies are notoriously difficult to observe, they hold the promise of revealing the galaxy’s merger history. Stellar halos of galaxies are built up from the merger debris of accreted and disrupted satellites. As a satellite galaxy is cannibalized by the main galaxy, it leaves behind a trail of debris similar to  ‘breadcrumbs’. Deciphering the merger history of a galaxy from these ‘breadcrumbs’ would enable us to understand how these galaxies build up over time as well as disentangle which of the galaxies properties were caused by these mergers.

Over the last 15 years, the astronomy community has dedicated a lot of observing resources to observe these extremely low surface brightness regions surrounding nearby galaxies. The stellar halo of our nearest closest neighbor, the Andromeda Galaxy (M31), has been mapped to exquisite detail out to a galactocentric distance of 150 kpc (PAnDAS, SPLASH).  Our own team has been actively engaged in studying the stellar halos of 6 nearby edge-on Milky Way-mass galaxies using the Hubble Space Telescope called the GHOSTS Survey. Despite the wealth of our observations showing the diversity in the stellar halos of Milky Way-mass galaxies, we are no closer to our goal in unravelling the merger history of galaxies. Over the course of its lifetime, galaxies accrete a large number of galaxies making the recovery of the merger history  a complex multi-dimensional problem.

In order to disentangle the merger history of the galaxy from the observations of its stellar halo, what was needed was a concentrated effort in modelling them. Hence, we posed ourselves a challenge: If we cannot decipher something about the accretion history of M31 for which we have the most observational data, then it would be impossible or much more difficult to do so for other more distant galaxies.

Our key insight came from the GHOSTS survey, where we found a correlation between the masses and the metallicities of nearby Milky Way-mass galaxies. This correlation was very similar to galaxy stellar mass-metallicity relationship found in galaxies.  First, we realized that our observations along the minor axis of galaxies perpendicular to the disk plane were tracing the accreted stellar component with hardly any in-situ contamination. Second, we found that using large-volume publicly available cosmological simulations, we could explain this correlation if the most massive accretion event dominated the stellar halos of galaxies.  To our surprise, the models of the accreted stellar component of galaxies provided a pretty good fit to the stellar halo masses and metallicities of the GHOSTS galaxies. We realised that we had finally had a way of disentangling an important part of a galaxy’s merger history : the masses and the metallicities of the stellar halos of galaxies could reveal to us something about the most massive accretion event of a galaxy. We published these results here.

We decided to use this insight to understand the wealth of observational data about M31 to understand its most massive accretion event. Our model suggested that M31 with its extremely large and metal-rich stellar halo should be dominated by a single large accretion and recent accretion event. Not only did the data support it, but it helped clear up a lot of confusion about the stellar halo of M31, especially the presence of intermediate age populations found at large galactocentric distances.  Moreover, this large disrupted galaxy was much larger than M33 and would have been the third largest member of the Local Group after the Milky Way and Andromeda galaxies. More surprisingly, we realised that the debris of this massive progenitor could explain the elusive compact satellite M32 and M31’s giant stellar stream. We call this large disrupted galaxy M32p.

Our hope is that this discovery would spur the astronomy community to invest more in observations of the stellar halos of nearby galaxies as well to encourage more sophisticated modelling efforts to decipher their accretion histories. 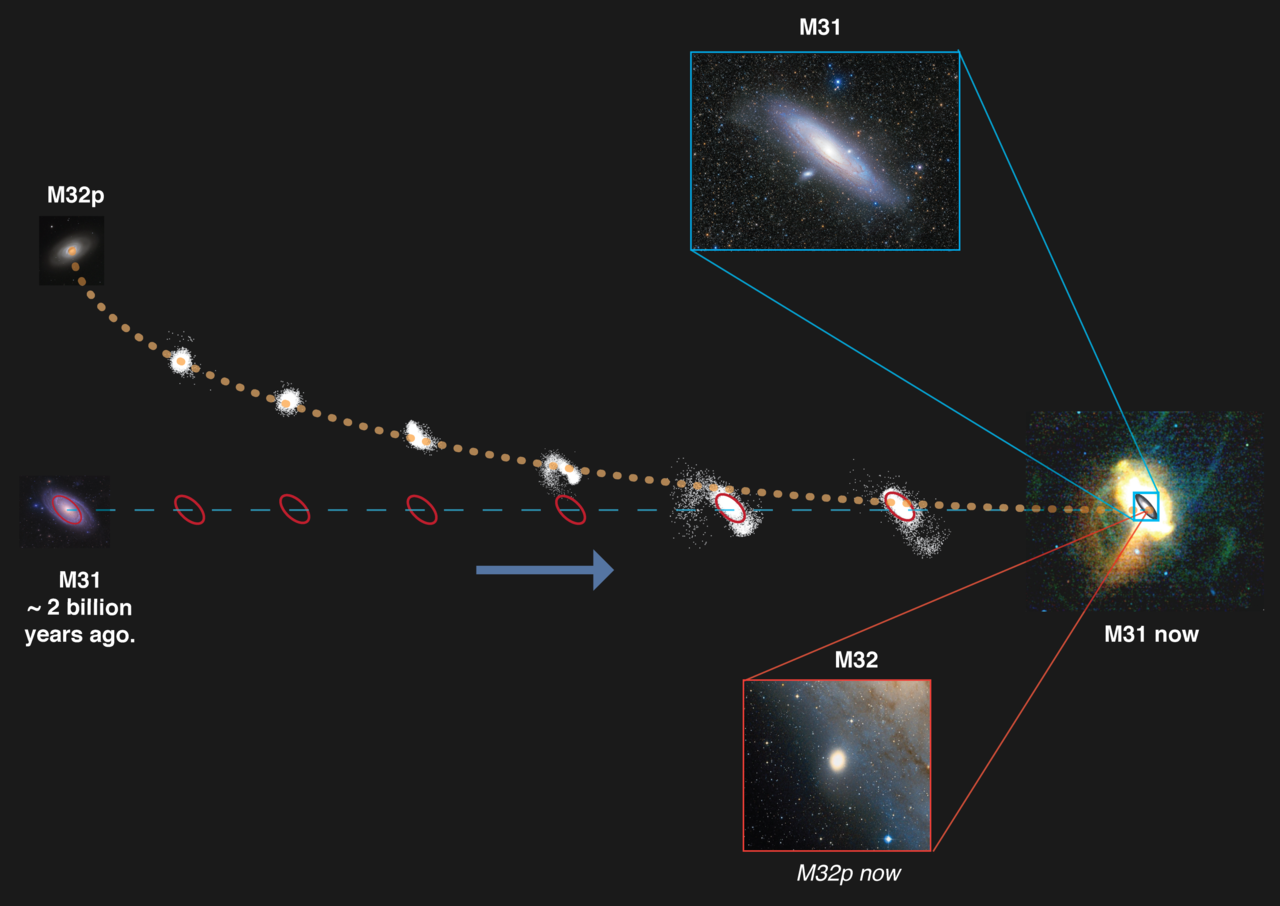 Can we decipher the Andromeda galaxy's merger history?

Can we ever decipher the merger history of an external galaxy from its stellar halo? Yes, we can! The large metal-rich stellar halo of the Andromeda galaxy suggests that it merged with a large metal-rich galaxy (M* ~ 2e10 Msun) about 2 Billion years ago leaving behind a trail of debris including possibly M32, much of the inner stellar halo and the giant stellar stream. Surprisingly, this disrupted galaxy was the third largest member of the Local Group after the Andromeda and Milky Way galaxies.