A New Type of Aurora at Mars

A large fraction of scientific discoveries have begun with a variation on the phrase, “Well, that’s strange…”. And the discovery of proton aurora at Mars was no exception (Paper available here: go.nature.com/2JPPQgk

We’ve been learning a lot about the atmosphere of Mars and how it has changed over time from NASA’s Mars Atmosphere and Volatile Evolution mission (MAVEN). One of my duties as part of the Imaging Ultraviolet Spectrograph (IUVS) instrument team is to review the new data each week to ensure that it was collected properly. This gives me the chance to be one of the first people to spot something new or unusual, which I then bring to the rest of the science team.

One of the brightest and most ubiquitous things IUVS sees is Lyman-α photons from the first electronically excited state of atomic hydrogen. This hydrogen comes from water broken up by sunlight in the lower Martian atmosphere, and is light enough to escape from Mars by thermal energy alone. The so-called corona of hydrogen surrounding Mars is optically thick, so interpreting the data is like being in the middle of a fog: it is hard to tell what you’re looking at when you can’t see past your nose! But this is a special fog, scattering only a specific color of light. Emissions from Doppler shifted “hot” hydrogen atoms or from the deuterium isotope can cut right through. At some point I thought to start looking for these optically thin sources in the IUVS data.

I was not ready for what I found. There was definitely a brightening of Lyman-α in the upper atmosphere, but it was (1) very bright, with increases up to 40%, (2) highly peaked in altitude, within a range of just 30 km or so, (3) global in extent, occurring across the entire dayside of the planet, and (4) erratic, happening every few days and coming and going in just a few hours. The atmospheric reservoir of deuterium cannot change so much that quickly, let alone the total hydrogen inventory. Stranger still, the rest of the ultraviolet airglow from the planet was business as usual, well within normal variability. That appeared to rule out hot atoms produced in the upper atmosphere: how could energy be selectively pumped into hydrogen, a trace gas at Mars, and not significantly impact any other species?

After ruling out an instrumental artifact, I brought this to the broader IUVS team. Multiple members use Lyman-α to study how hydrogen escapes the planet, but their focus had been on much higher altitudes. While we were puzzling, the other MAVEN instrument teams were solicited for anything unusual in their data during the same time period. Sure enough, the Solar Wind Ion Analyzer (SWIA) had observed a population of solar wind protons penetrating into the thermosphere at exactly the times IUVS saw Lyman-α brightening.

There was the solution: the brightening was not from native Martian hydrogen, but energetic hydrogen precipitating from space that had originally been charged solar wind protons. Those protons had transformed into atoms by stealing electrons from the Martian coronal hydrogen upstream of the bow shock that normally deflects the charged protons from the solar wind. This allowed them to slip through the bow shock and ram into the planet, depositing their energy as proton aurora. This mechanism is very different from proton aurora at Earth, where plasma transport is dominated by the strong global magnetic field (Mars doesn’t have one).

As it turned out, this process was hypothesized two decades ago, but before MAVEN no one had the data to test the prediction. Pulling in modeling expertise from the MAVEN team, we gradually convinced ourselves that data and theory all hung together. A satisfying resolution to a “Well, that’s strange…” moment. 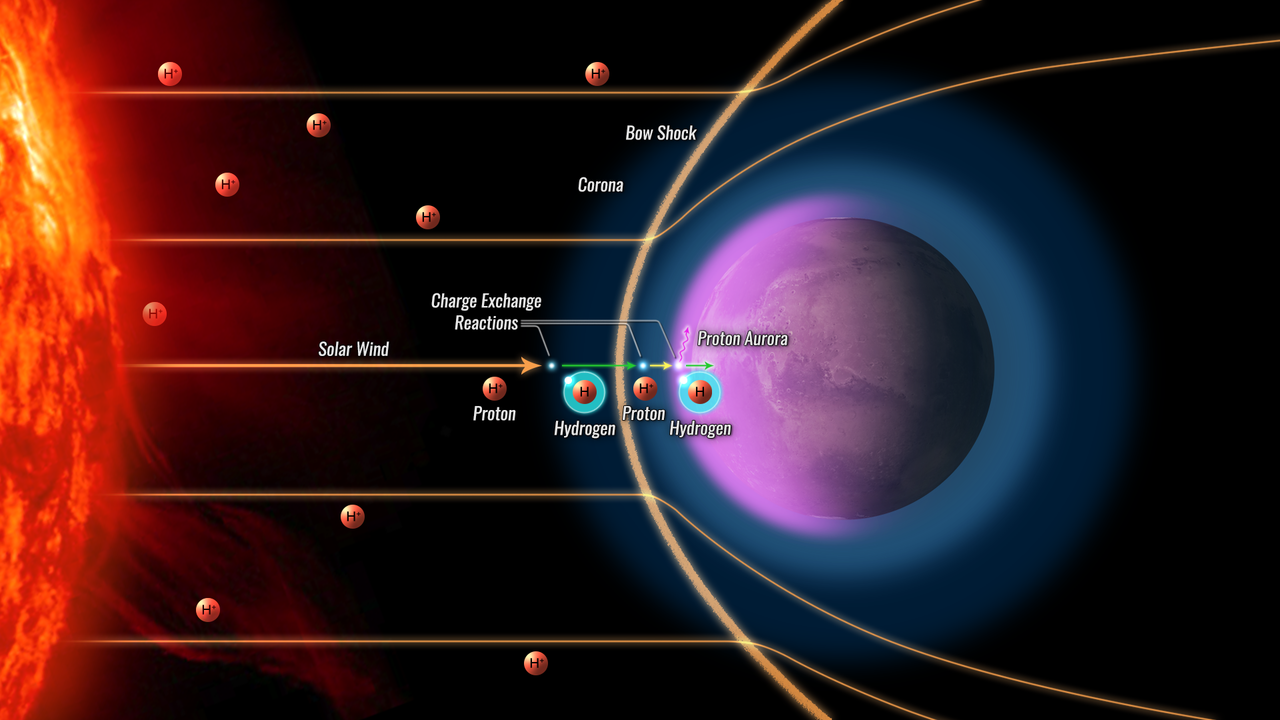 A New Type of Aurora at Mars