Many astronomy articles have a tagline along the lines of "Astronomers are baffled by <unexplainable observation>". This unprecedented discovery of a light echo around a superluminous supernova represents one of those rare cases where an initially baffling observation turned out to have a very simple and satisfying explanation.
Ragnhild Lunnan
Marie Curie Fellow, Stockholm University
Follow
Like Liked by Paul Woods
0

At first glance, there was nothing particularly extraordinary about the supernova iPTF16eh. After observing it rise over a few weeks in imaging data from the intermediate Palomar Transient Factory, a spectrum taken February 2016 showed it belonged to the class of so-called "superluminous" supernovae. These objects are mysterious in their own right - we do not yet understand the physical mechanisms behind their extreme luminosities or exactly what their progenitor stars are. At peak brightness, iPTF16eh looked like a typical example, however.

Around the wavelength where we had seen the Mg II absorptions (2800 Å), an emission line was emerging. It was clearly present in the spectra taken during May-July 2016, after which the field set. Our next spectrum, taken January 2017, showed that the emission line was still present, but had shifted to a redder wavelength by several tens of Ångstrom, going from being blueshifted to redshifted with respect to the supernova. A closer inspection of the previous spectra showed that the line centroid had been shifting systematically redder with time, it was just much more obvious over the longer time gap. What on earth was going on??

Fortunately, I happened to be visiting the Oskar Klein Centre in Stockholm when analyzing these new observations, and was able to show them to my collaborator Prof. Claes Fransson. He immediately remembered a similar effect happening in SN1987A (poster image), where light from the supernova excited atoms in a circumstellar ring, resulting in a "light echo" effect. For iPTF16eh, we realized that both the extra absorption system and the emission line must come from a fast-moving shell of material surrounding the supernova. The cartoon below describes the model we came up with:

This picture was able to neatly explain all our observations: the existence of the second absorption system, the existence of the emission line, and why the emission line appeared to move with time. We were seeing a light echo effect, where light scattered off the front of the shell travels a shorter path and therefore reaches us earlier than light scattered off the back of the shell. This also allowed us to make an exciting prediction: that the emission line should continue to move until it reached a velocity comparable to that of the absorption lines (indicating we were seeing light scattered from the very back of the shell), and after this it should fade away. We were able to obtain spectra for the next three months monitoring the evolution, and this is exactly what we saw happening!

Light echos - supernova light scattered off surrounding materials - have been observed before, but usually in the form of scattering by dust grains. In the case of iPTF16eh, we were instead seeing a light echo formed by resonance line scattering: light from the supernova excites the Mg II resonance lines at 2800 Å; the Mg II atoms then decay back to the ground level, emitting a photon in a random direction that we see as an emission line. This allowed us to model and measure several properties of the shell: we get its velocity directly from the Doppler shifts of the line, while the duration of the emission allows us to constrain the size of the shell; combining these we can say that the star ejected the material roughly three decades before it exploded. Such violent eruptions on these kind of timescales are not easy to explain; in the paper we discuss the possibility of the shell being the result of a pulsational pair-instability ejection, implying that the star that exploded was very massive.

The fun is not over yet: in a decade or so, the supernova ejecta will actually catch up with and collide with the shell! This should cause it to light up again, and may teach us even more about this spectacular explosion. 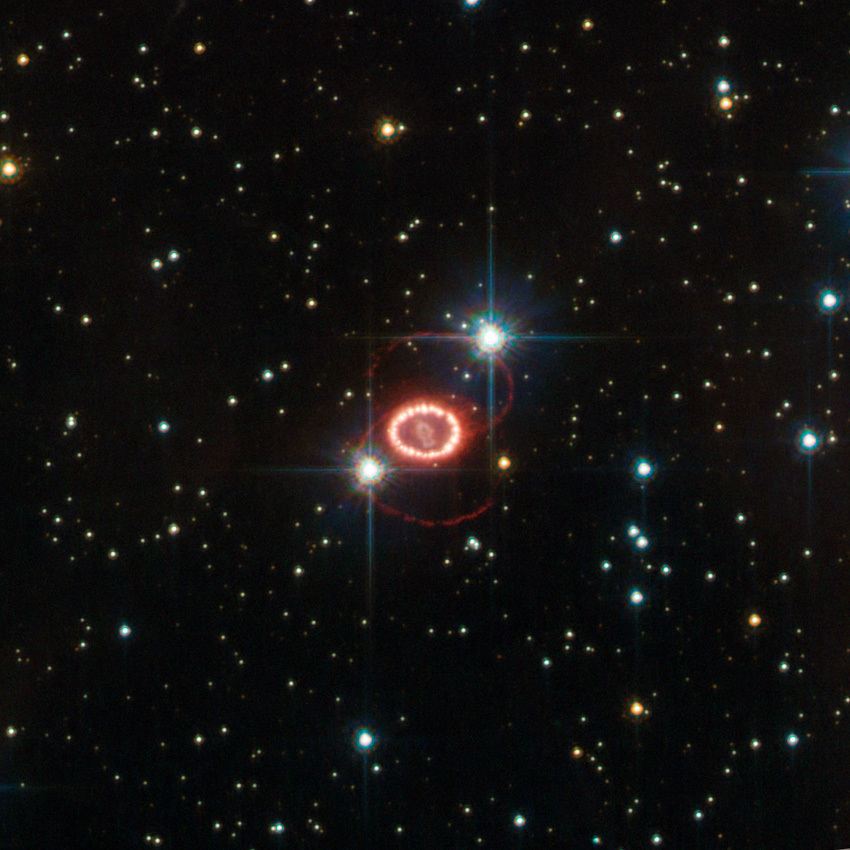 Many astronomy articles have a tagline along the lines of "Astronomers are baffled by <unexplainable observation>". This unprecedented discovery of a light echo around a superluminous supernova represents one of those rare cases where an initially baffling observation turned out to have a very simple and satisfying explanation.