Saturn’s largest moon, Titan, is unique among all moons in our Solar System considering its dense, nitrogen-rich atmosphere with a significant fraction of hydrocarbons.
Ralf Kaiser
Professor, University of Hawaii at Manoa
Follow
Like Be the first to like this
0

The origin and chemical evolution of the reducing hydrocarbon- loaded  atmosphere has been the source of scientific debate for decades. Since the first observation of benzene in Titan’s atmosphere, complex aromatic species are being inferred to contribute to Titan’s orange-brownish haze layers. Benzene along with the phenyl radical are considered as fundamental building blocks to form higher molecular weight polycyclic aromatic hydrocarbons (PAHs) in the atmosphere of Titan. Due to the high abundance of nitrogen, about one-third of the PAHs are suggested to carry nitrogen, with those PAHs/N-PAHs believed to act as precursors to biologically relevant molecules. Thus, an understanding of the formation of PAHs in Titan’s atmosphere may provide critical insights on the chemical evolution of the organic haze layers and potentially, on how astrobiologically relevant molecules can be formed in these low temperature environments.

In the past, the Hydrogen-Abstraction-Acetylene-Addition- (HACA) mechanism has been proposed to drive the PAH synthesis at various temperatures. However, electronic structure calculations and kinetic modeling suggest that HACA, which involves a repetitive sequence of atomic hydrogen abstraction from the aromatic hydrocarbon followed by sequential addition of one or two acetylene molecules to the radical site prior to cyclization and aromatization, cannot fully explain the formation of large PAHs in high abundance.

Also, typical barriers in the HACA mechanism typically range from 10 to 20 kJ mol-1, which cannot be overcome in the extremely low temperature conditions in Titan’s atmosphere. Consequently, the ubiquitous presence of PAHs in the extraterrestrial environments such as in Titan’s amtosphere can be accounted only if alternative pathways exist to a rapid formation of PAHs beyond the HACA route.

To be operational in low-temperature conditions alternative pathways should not involve any barrier above the energy of the reactants. Recently, the studies revealed that the naphthalene molecule can be synthesized in the reaction of the phenyl radical (C6H5•) with vinylacetylene (C4H4) and the corresponding mechanism was designated as Hydrogen-Abstraction–Vinylacetylene-Addition (HAVA). This bimolecular reaction is barrierless and leads to naphthalene (C10H8) along with atomic hydrogen via a single, bimolecular gas phase collision at temperatures as low as 10 K. The HAVA mechanism has also been theoretically studied in recent years. However, the reported investigations focus on the process from a single-ring aromatic species (phenyl, C6H5•) to bicyclic aromatic naphthalene (C10H8). The validity of HAVA to generate PAHs beyond naphthalene has remained conjectural, since not a single previous experiment has been performed to corroborate that more complex PAHs like anthracene (C14H10) and phenanthrene (C14H10) are formed. To demonstrate the versatile applicability of the HAVA mechanism to the growth of larger PAHS, we designed an experimental and theoretical investigation on the reactions of 1- and 2-naphthyl radicals with vinylacetylene. Our experimental study identified anthracene and phenanthrene as the key reaction products of the elementary reactions of the 1-/2-naphthyl radical with vinylacetylene. The reaction channels display no entrance barrier, are exoergic, and all transition states involved are located below the energy of the separated reactants.

This investigation highlights a possibility that further PAH growth can occur via the HAVA sequence in the Titan’s atmosphere since this mechanism exhibits no entrance barrier and the fundamental PAH precursors can be generated by the photolysis of PAH molecules by UV photons. In turn, the photolysis is possible because the major constituents of Titan’s atmosphere, such as molecular nitrogen and methane, provide no or little shielding of the UV photons. Moreover, with the high concentration of molecular nitrogen, the PAHs may incorporate N atoms and produce N-PAHs, which are considered as precursors of the haze in Titan’s atmosphere.

Due to the lack of the direct observation of Titan’s atmosphere beyond Cassini-Huygens, researchers turned to the simulation studies on the photodissociation of gas mixtures such as nitrogen/methane in the laboratory with identification of the products employing infrared and mass spectrometry. While the CH4/N2 mixtures resulted in high molecular weight polymers incorporating PAHs and polyphenyl type systems, seeding these mixtures with trace aromatic compounds like benzene and naphthalene gave rise to PAH-based ring structures. These processes are reminiscent to free radical chemistry involving reactions of phenyl and naphthyl radicals prevalent in combustion environments. Hence, our studies support the hypothesis that free radical based chain reactions could synthesize large PAH molecules, which can act as nuclei for particle growth in Titan’s atmosphere.

This story is definitely to be continued. It may require a long time and significant  efforts and dedication on behalf of our team members. But this is indeed an exciting topic considering that the discovery of the mechanisms for the growth of complex molecules may give us the clue to cut through the mystery of Titan’s atmospheric haze and even to the origin of life.

The paper in Nature Astronomy is here: go.nature.com/2pOT2RY 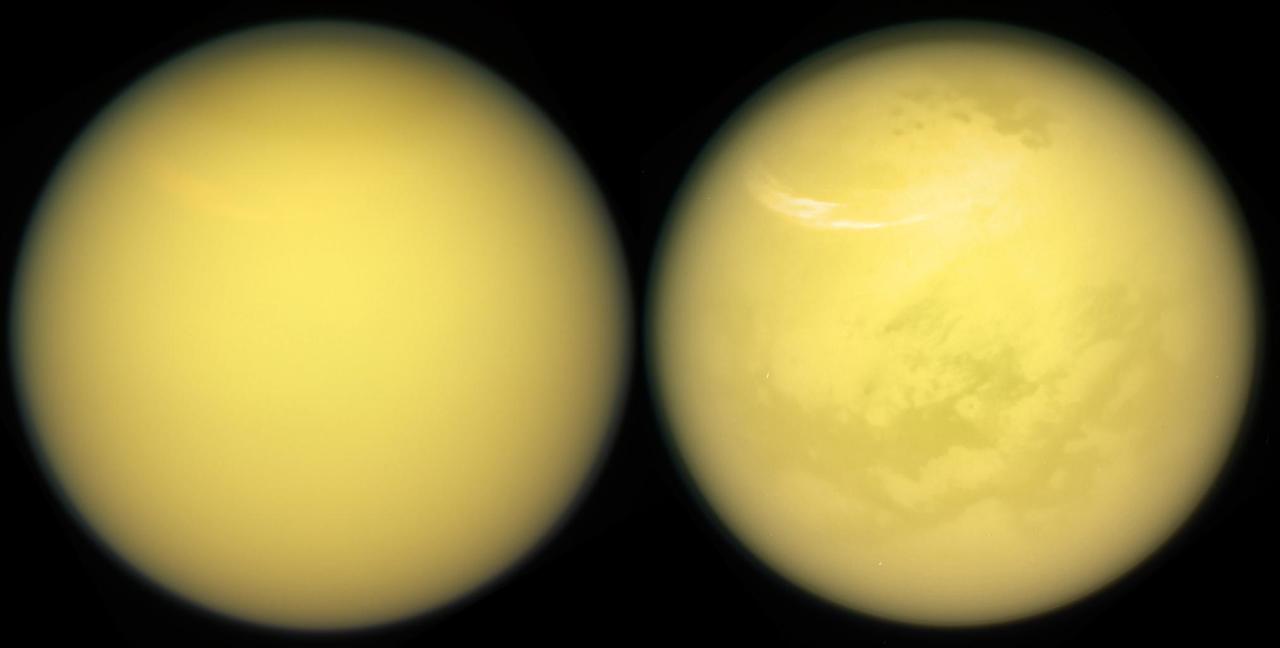 Saturn’s largest moon, Titan, is unique among all moons in our Solar System considering its dense, nitrogen-rich atmosphere with a significant fraction of hydrocarbons.