A Giant Protocluster of Galaxies in the Distant Universe

We discovered a giant protocluster of galaxies at redshift 5.7, when the Universe was only one billion years old (about 7% of its current age). This protocluster will collapse into a galaxy cluster with a total mass of ~ 3.6 × 10^15 solar masses, making it the most massive protocluster currently known at redshift higher than 4.
Linhua Jiang
Professor, Peking University
Follow

There are three things you should know about this protocluster. First of all, its member galaxies were spectroscopically confirmed, thanks to our deep spectroscopic observations. This allows us to remove contaminants and measure reliable properties from secure redshifts. Second, it is enormously large, occupying a cosmic volume of ~ 35×35×35 cubic co-moving megaparsecs (cMpc3), i.e., 35 cMpc on a side (1Mpc is about 3.26 million light-years). Third, its galaxy density is very high, roughly 6.6 times the average density at redshift 5.7. Because of its huge size and high density, it is extremely massive.

The discovery of this giant protocluster is somewhat unexpected, and is more like a “by-product” of a bigger program of mine (surprising). Here is a little background about this big program that is actually not directly related to galaxy clusters or protoclusters. The program is about the evolution of high-redshift Lyman-alpha emitting galaxies (LAEs) and cosmic reionization. The epoch of cosmic reionization is the epoch when the intergalactic medium (IGM), i.e., neutral hydrogen, was ionized by the first astrophysical objects. Reionization happens roughly between redshift 15 and 6. High-redshift quasar spectra have provided strong evidence that reionization ends at redshift ~6. More than 10 years ago, my collaborator Professor N. Kashikawa found a strong evolution of the LAE population from redshift 6.5 to 5.7, which may provide independent evidence that cosmic reionization ends at redshift ~6. But later studies by different groups obtained quite different results.

To solve this important problem, I started a program in 2015, aiming to build a much larger sample of LAEs at redshift 5.7 and 6.5 over a much larger sky area (compared to previous studies). We have several other scientific goals in addition to the above one. Needless to say, protoclusters are one of them. We selected LAE candidates in five well-studied fields. In one of the fields called SXDS, we identified a large overdense region at z ≈ 5.7. Then I decided to observe this region first, and soon spectroscopically confirmed at least 41 luminous LAEs. This giant protocluster (SXDS_gPC for short) has a size of ~35 cMpc on each side and a high density that is about 6.6 times the average density at z ≈ 5.7. My collaborators and I were really surprised by this giant structure. Professor X. Fan said to me “you are really lucky”. When I designed the program, I hoped to find a few protoclusters, but did not expect to find such a giant protocluster.

Both classical theories and cosmological simulations tell us that SXDS_gPC will inevitably fall into a giant galaxy cluster (that is why it is called a protocluster). The “trouble” is how to estimate the total mass of this cluster, because this kind of objects are rare, and we couldn’t find one in our cosmological simulation. So, we had to extrapolate the mass of the most massive protocluster in our simulation to estimate the mass of SXDS_gPC. It is not surprising that the resultant mass is also enormous, about 3.6 × 1015solar masses, which is comparable to those of the most massive clusters or protoclusters known to date. This makes SXDS_gPC the most massive protocluster at redshift higher than 4.

The discovery of such a protocluster is intriguing. The cold dark matter model (currently the standard model of cosmology) predicts that small structures merge hierarchically to form large structures. Therefore, larger structures are expected to form in the later cosmic times. So, how can SXDS_gPC exist when the Universe was only 7% of its current age? Another important (and related) question is how rare such protoclusters are. In other words, can we find more protoclusters like SXDS_gPC in the near future. My collaborator M. Ouchi is leading a survey LAEs at redshift 5.7 over a much larger area of sky using the Subaru telescope. Hopefully more such protoclusters will be found soon. A sample of such protoclusters may be used as an ideal probe for understanding early structure formation of the Universe. 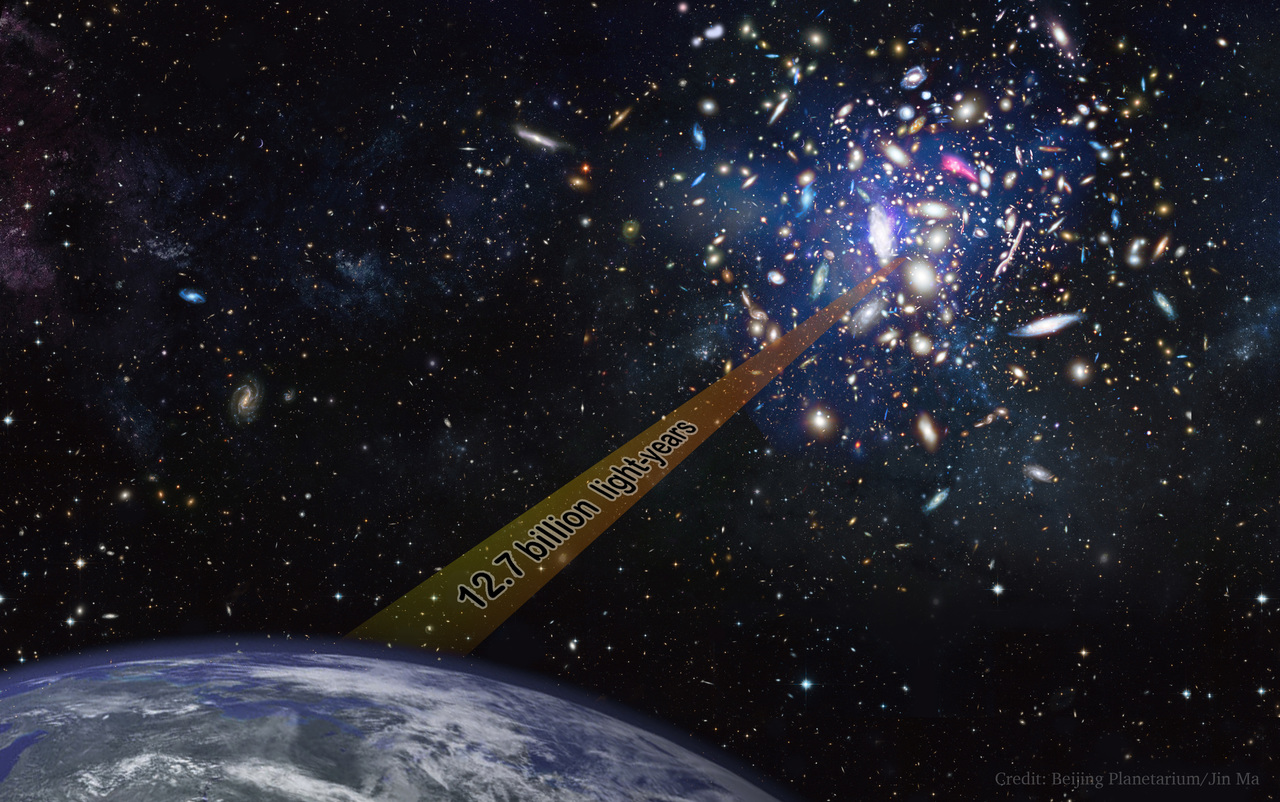 A Giant Protocluster of Galaxies in the Distant Universe

We discovered a giant protocluster of galaxies at redshift 5.7, when the Universe was only one billion years old (about 7% of its current age). This protocluster will collapse into a galaxy cluster with a total mass of ~ 3.6 × 10^15 solar masses, making it the most massive protocluster currently known at redshift higher than 4.