The wild duck delivers its secrets

The effects of stellar rotation are now necessities to understand the evolution of stars and star clusters. These are not options anymore.

Star are rarely born in isolation, and much remains to understand on the formation of star clusters. One question is whether star clusters comprise a single stellar population or result from multiple formation events. Indeed, while the former view was accepted in the past, the detection in the last decade of a colour spread at the main-sequence turn-off led researchers to envisage the presence of mutiple populations, formed over 100-200 million years. However, this poses a problem for open clusters: their total mass generally is insufficient to be able to sustain multiple formation events though a colour spread has been reported for them too!

A new analysis of the Messier 11 cluster (M11), located at 2kpc and harbouring ~3000 stars, shed new light on this issue and solves the problem. First, the membership of stars in the area was assessed using proper motions from GAIA Data Release 2. Then rotational velocities of cluster members were measured on high-resolution spectra taken at European Southern Observatory (ESO) in the framework of the GAIA-ESO public spectroscopic survey. Comparing them to the known colours of the stars already unveils a correlation between colour and rotation rates: the redder stars also are the fastest rotators. In fact, rotational mixing inside the stars brings fresh hydrogen to the core, thereby extending the main sequence lifetime by several tens of percent, explaining the colour spread at turn-off.

But this is not the end of the story. The measured rotational velocities are projected velocities (V sini) along our line-of-sight, but the important parameters are the actual rotation rates. To constrain them, several possible distributions of equatorial rotational velocities and inclination angles were considered. The best fit to the observations was found for stars with highly aligned spin axes and a broad distribution of equatorial velocities skewed towards high rotation rates. In other words: the spin axes of the stars in M11 were not randomly oriented! This should be related to the formation process, and recent simulations have indeed suggested this can happen if the parent cloud has a strong rotation to begin with.

Finally, synthetic cluster simulations using this best-fit underlying rotation distribution, the gravity darkening, the differential reddening and the Geneva stellar evolutionary models. The colour-magnitude diagram of M11 could then be reproduced using a single stellar population. The presence of multiple stellar populations is thus not required to explain the colour spread at the turn-off.

The poster image from ESO : https://www.eso.org/public/images/eso1430a/ 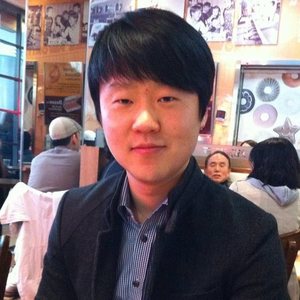