Photometry and parallax data from the Gaia satellite provide direct observational evidence of a theoretically predicted pile-up in the cooling sequence of white dwarfs, which is associated with core crystallization.

I can guarantee that many astronomers around the world had a plethora of sleepless nights in preparation for the daunting day of 25th of April, 2018; the day when the astronomical community was promised to experience something akin to a renaissance in the realm of stellar and Milky Way astronomy. This date marked the second data release (DR2) of the Gaia satellite, which contained positions, proper motions and parallaxes of more than a billion nearby stars, three orders of magnitude more stars than the first data release of Gaia and other previous catalogues of similar nature. Parallax is a proxy for the distance to a star and is an incredibly useful parameter for astronomy as it allows the transformation of the star’s apparent brightness (or apparent magnitude) measured from Earth or space to the star’s ‘true’ brightness (absolute magnitude). In the research field of white dwarfs, the end states of around 97% of all stars in the Galaxy including the Sun, we knew that Gaia DR2 would not only provide the community with precise measurements for the known white dwarfs but would also help us identify many more of them. What we did not quite expect was that our team would find the first direct evidence of white dwarfs undergoing crystallisation, a result not only important for cosmochronology (aging) of the Milky Way, but also for studies of phase transitions at the high temperatures and extreme densities of white dwarfs which currently cannot be replicated in laboratories.

The morning of the data release, Gaia revealed never seen before structures in the Hertzsprung–Russell (HR) diagram of white dwarfs (Figure 1): three distinct tracks of which two are parallel (labelled as A & B in Figure 1) and one is transverse (labelled as Q in Figure 1). In general, the HR diagram is constructed by plotting the absolute magnitude of stars against their colour index, which is found from the difference between the absolute magnitudes in two different filters and is related to the temperature of a star. Prior to DR2, the number of white dwarfs with precise parallax measurements and therefore absolute magnitudes and colours had been so small that we simply could not observe such structures. While the A and B tracks are relatively well understood, the transverse track Q caught the attention of our team as it does not follow the predicted evolution of a single white dwarf in the HR diagram.

Figure 1: The white dwarf HR diagram presented in one of the Gaia DR2 team papers. Sequences labelled A and B are parallel evolutionary tracks. The sequence labelled Q is transverse to A & B and therefore cannot be explained by a single-mass evolutionary track. Figure 13 from Gaia DR2 - Observational Hertzsprung-Russell diagrams.

Unlike main sequence stars, white dwarfs do not have any nuclear reserves of power; they predictably cool and get dimmer as they age, eventually fading to complete darkness. This relation between age and brightness gives us the ability to use white dwarfs as precise clocks to age different stellar populations. Compositionally, a white dwarf is effectively the leftover core of a main-sequence star made up of carbon/oxygen nuclei and a fast-moving electron gas governed by quantum mechanics and supported by quantum degenerate pressure. This pressure does not depend on temperature, meaning that a white dwarf would cool at an almost constant radius. Therefore, for a Galaxy like our own that has continually produced stars for the last ten billion years, white dwarfs are expected to follow well defined diagonal-like evolutionary tracks in the HR diagram, with objects of different mass following parallel sequences. This directly explains the A and B parallel tracks observed by Gaia, but the transverse sequence remained a mystery. As this track could not be explained by an evolutionary path of a white dwarf, we hypothesised that the cause of the sequence could be a pile-up of white dwarfs with certain properties that do not correspond to a particular mass or age.

As white dwarfs grow old, their carbon/oxygen core is thought to crystallise by a first-order phase transition (e.g. water freezing), starting from the centre and moving outwards. This change of state releases energy, providing an additional heating source and keeping the white dwarf at a given temperature longer. If this effect is not taken into account, the stellar ages derived from studies of white dwarfs can be off by as much as 15% of the age of the Universe! The slowing down in cooling was predicted to cause an over-density of white dwarfs at particular magnitudes and colours by Hugh M. Van Horn at the University of Rochester in 1968. However, this was never observed and largely forgotten, possibly due to the lack of parallax measurements for most local, faint white dwarfs before Gaia. About one month after Gaia DR2 we realised that the over-density corresponds very precisely to the position of the transverse sequence! To rule out any explanations other than crystallisation and test the accuracy of Gaia measurements, I helped in comparing the Gaia measured temperatures and luminosities of the white dwarfs in the sequence with independent spectroscopic observations. Our team concluded that these white dwarfs are perfectly normal apart from their core being in the process of solidifying, pausing their cooling process and creating an excess of objects in the HR diagram.

Figure 2: As white dwarfs cool, they undergo a first-order phase transition causing solidification of the white dwarf interior starting from the centre outwards. This is known as crystallisation. Artistic impression by Dr Mark A. Garlick.

Although so elegantly simple, this paper was a culmination of many months of work before and after Gaia DR2. Many meetings were held prior to the release to discuss our preparation and progress, and many long nights were spent in the same room working on different aspects of the release. Sometimes pizza was involved so it was not all so grim. During those months, researchers in our team performed a herculean task by extracting 260 000 high-confidence white dwarfs from the billion sources of Gaia DR2. This led to an order of magnitude increase in the number of known white dwarfs, without which it would not have been possible to characterise the crystallisation sequence. In the summer, the bi-annual European White Dwarf Workshop was held in Austin, Texas, where we learned that the white dwarf research group at the University of North Carolina independently characterised the crystallisation sequence. At that point we decided to join forces on the Nature paper.

When it comes to discussing the end stages of stars, white dwarfs are sometime overshadowed by their massive cousins, neutron stars and black holes, especially with the recent detection of gravitational waves. Yet, white dwarfs are fascinating in their own right, and can be used as testbeds for fundamental physics that we currently cannot do in laboratories, showing the crucial link that astrophysics has to other areas of physics. 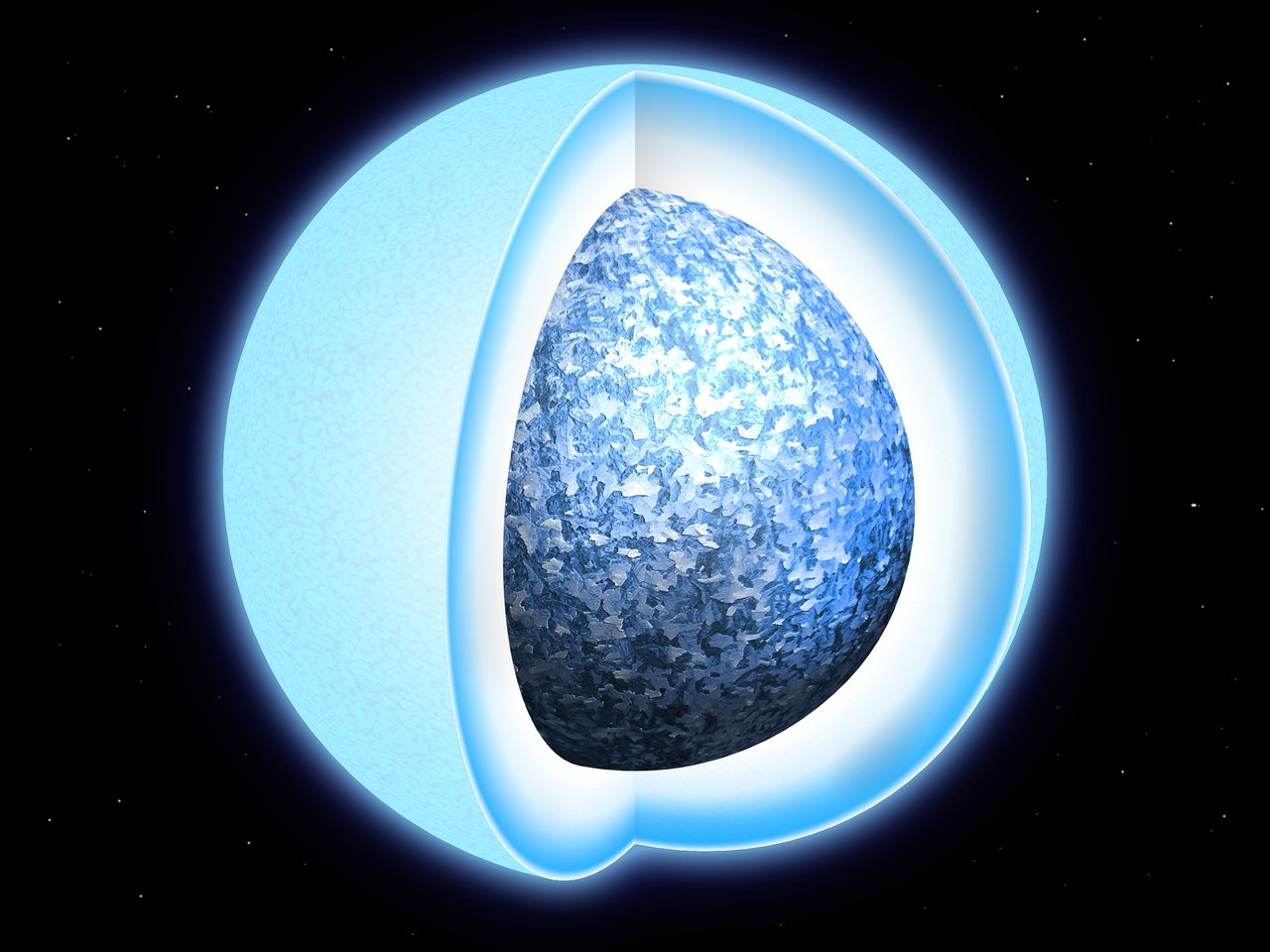