Supermassive black holes live at the centers of all massive galaxies. The one in our Milky Way's center is 4 million times the mass of the sun. The largest supermassive black holes are over a billion times more massive than the sun! The most extreme grow to that mass only 800 million years after the Big Bang. One might ask: How do they form in the first place? How do some grow so quickly? How common are they?
John Wise
Associate Professor, Georgia Institute of Technology
Follow
Like Liked by Steve Thompson and 3 others
1

Simulations of early galaxy formation suggest that the dynamics of structure formation, rather than the Lyman–Werner flux, drives the formation of massive black holes in the early Universe.

Our Nature paper focuses on the first question above.  One formation scenario involves a massive gas cloud forming a supermassive star between 1,000 and 100,000 solar masses. It becomes gravitationally unstable and directly collapses onto itself without an explosion. All of the star falls into what's known as a direct collapse black hole (DCBH).  Forming DCBHs requires a very special environment.  The gas cloud needs to be composed of only hydrogen and helium, the products of Big Bang nucleosynthesis.  Plus, star formation needs to be suppressed until the gravitational potential is deep enough to support supermassive star formation.  In the current paradigm, a strong radiation field is invoked to destroy molecular hydrogen -- the fuel of primordial metal-free star formation.

We started the Renaissance Simulations in 2011 and finally finished the last simulation in 2014.  We constructed its physical setup to simulate the first stars and galaxies in the universe.  At the time, we weren't even concerned with simulating black holes!  They were too computationally expensive to follow along with the thousands of galaxies in the simulation.

The first paper (Xu et al. 2013) from these simulations looked where the remnants of primordial metal-free stars exist.  I noticed in one figure that there was a small fraction of dark matter halos hadn't hosted any stars but were massive enough to definitely host star formation.  What was going on?  Were these candidates for DCBH formation?  I filed it away in my mind since I had little time to start a new project.

Only three years later at the First Stars V meeting, John Regan and I discussed this oddity in the data.  I performed some quick analysis during the week. We were extremely puzzled to find that these halos weren't exposed to a strong radiation field.  The current paradigm requires a strong radiation but no metals.  Massive stars however create both radiation and supernovae, where the metals lag behind the radiation fronts as they travel away from the galaxy.  The scenario therefore required a "Goldilocks" picture where the DCBH forms at just the right distance from a galaxy.  Our initial findings suggested that this was not the case.

In the following academic year, I taught two new classes, consuming most of my workday and leaving little time for research.  John Regan and I were at the Enzo Workshop in June 2017, where we picked up the project again.  The reason why there were starless had to be in their history.  We chose to look at two halos in more detail.  Intriguingly, they both experienced intense period of growth.  This was the first piece of evidence why they were starless.

This finding gave us the motivation to really push for the rest of the summer, especially since I had a double-teaching load in the Fall semester.  The idea of suppressing star formation from strong halo growth wasn't a new idea.  Research led by Naoki Yoshida in 2003 showed that the same mechanism, which they termed "dynamical heating," could suppress and delay the formation of the first stars in the universe.  However nobody had thought to apply this process to the formation of supermassive stars and DCBHs.  Most of the analysis were completed by summer's end, and we slowly wrote the paper in the Fall until...

My wife was diagnosed with stage 1 breast cancer in October 2017 at the age of 36.  She is a PhD student at Georgia Tech studying Physics Education Research.  Her advisor and our department chair were extremely understanding, giving as much time off as necessary to recover from surgery in November 2017 and treatment in early 2018.

Life should always take priority over work.  I halted all research and focused on supporting her through this life-threatening condition.  We were fortunate enough to have her parents move from Puerto Rico to our house, helping us through these tough times.  Early detection was key, and we are forever grateful to her doctors.  She is now thankfully cancer-free.  Research can always wait.  Life is irreplaceable.

I returned to work in February 2018.  We submitted our paper to Nature later that month, and it was accepted in November.  Our results provide a new and more natural formation mechanism for (super)massive black holes.  These seeds most likely do not grow into the most luminous and rare quasars, but we predict that they are the progenitors of more normal supermassive black holes, not unlike the one at our Galaxy's center.

The next logical step is to follow the growth and formation of these simulated supermassive stars.  The varying rates of gas flowing onto these behemoths will ultimately determine their final masses and thus black hole masses.  We are currently running such simulations.  We are also planning on investigating how the galaxy grows around this massive black hole over cosmic time until the present day.

Ruth Milne
over 3 years ago

Thanks for a great post! John is also featured on the Nature Podcast taking about this paper and research. Listen here: https://www.nature.com/articles/d41586-019-00266-y 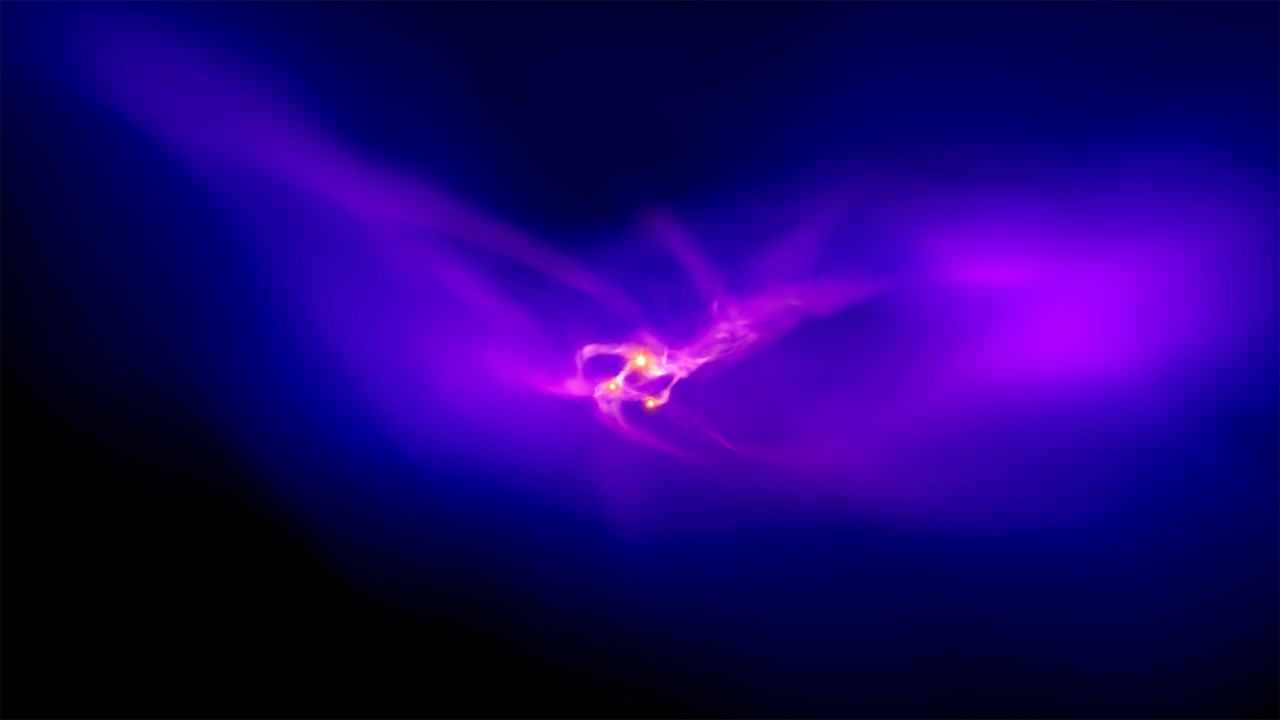 Supermassive black holes live at the centers of all massive galaxies. The one in our Milky Way's center is 4 million times the mass of the sun. The largest supermassive black holes are over a billion times more massive than the sun! The most extreme grow to that mass only 800 million years after the Big Bang. One might ask: How do they form in the first place? How do some grow so quickly? How common are they?