Planets are like tops spinning in space, each with a unique axial tilt. A surprising link between these tilts and the planets’ orbits may help explain a long-standing puzzle about planetary orbital architectures.
Sarah Millholland
NASA Sagan Fellow, Princeton University
Follow
Like Be the first to like this
0

Compact exoplanetary systems frequently experience spin–orbit coupling driven by secular resonances, which can shape their architecture, allowing the planet to maintain a large obliquity and inducing the piling up of planets just wide of the first-order resonance.

A wonderful thing about research is that effort is rarely entirely wasted. Even when a several months-long investigation seemingly goes nowhere, the work involved may usually be applied in an unforeseen context. This was certainly the case with our study of the obliquity-driven sculpting of extrasolar systems.

As opposed to a population of extrasolar planets, we were originally attempting to study the axial tilt of a single Solar System planet, Uranus. (The axial tilt, or “obliquity”, is the angle between the planet’s spin axis and its orbital axis.) Uranus’ 98˚ obliquity, along with its coplanar, equatorial satellite system, is a curiosity that does not have a square explanation. The most viable current theory is that the planet suffered two roughly Earth-mass giant impacts, but this idea has some limitations. As an alternative explanation, we were curious whether Planet Nine – the hypothetical massive planet in the distant Solar System – might have produced Uranus’ obliquity without a collision. If feasible, this would not only explain the Uranian tilt, but also provide compelling additional evidence for Planet Nine.

Such a scenario could be achieved through a “secular spin-orbit resonance”, a configuration in which Planet Nine perturbs Uranus’ orbit at a frequency that is similar to the rate of Uranus’ spin-axis precession and, in the process, generates a large Uranian axial tilt. Secular spin-orbit resonances are not uncommon; in fact, the tilts of both Jupiter and Saturn are thought to be due to resonances of this type. However, after several months researching this hypothesis, we found that it wouldn’t work: Due to a mismatch of timescales, Planet Nine is too small and too distant to have generated anything but a minute nudge in Uranus’ spin-axis tilt.

Leaving Planet Nine and the Uranian obliquity behind, we sought to find other cases where secular spin-orbit resonances might be important, so as to use the analytical understanding and numerical tools we had already developed. After several exploratory discussions roughly one year ago, we landed on something. Secular spin-orbit resonances might be important in short-period, nearly-coplanar exoplanetary systems. The large obliquities resulting from these resonances would generate strongly enhanced tidal dissipation in the planets, and these amplified tides could be a neat solution to a long-standing mystery. That is the puzzle of the overabundance of planetary systems with pairs of planets at orbital period ratios just wide of the 2:1 and 3:2 ratios (“mean-motion resonances”). These pile-ups can be explained if the planets are undergoing tidal dissipation while in mean-motion resonance, but only if the tidal dissipation is several orders of magnitude stronger than it is expected to be for a typical planet with zero axial tilt.

The problem hinged on whether these short-period, nearly-coplanar exoplanetary systems, which represent the prototypical or “default” planetary system in our Galaxy, are readily susceptible to secular spin-orbit resonances that produce large axial tilts. It turns out that this is very much the case. The rates at which these planets’ spin axes precess are naturally similar to the rates at which the planets mutually perturb one another’s orbits. The situation is analogous to a wooden top (representing a planet) spinning and precessing on the surface of a plate (representing its orbit), and the plate is arranged to precess at the same rate as the top. As a result of these resonant dynamics, we should expect to find the tops/planets at high obliquities. (One of us – Greg – actually set up an at-home experiment to truly see this in action. Check out the GIF below.) The final piece of the puzzle is that the large obliquities strengthen the dissipation rate of tides in these planets by three to four orders of magnitude, and this is the exact amount missing from the tidal explanation of the period ratio pile-up.

We were encouraged to find that this obliquity tide theory could additionally explain a myriad of secondary observations. For example, planets in pairs with period ratios wide of 2:1 and 3:2 have larger average radii than those just inside the ratios. This is an expected outcome of our theory, since the extra heat source from obliquity tides can puff up the planets, and tides are also stronger for planets with larger radii. Furthermore, the theory is consistent with several other as-yet unexplained trends observed in the distribution of orbital periods, orbital period ratios, and radii.

While it may seem an insignificant detail of a planet’s many characteristics, the axial tilt is truly a basic property that impacts several important features, like the planet’s structure, climate, global circulation, and potential habitability. Our finding that the planets in short-period, nearly-coplanar systems may be frequently tilted gives us a deeper understanding of what these planets might be like. We now know that they dissipate tides with an efficiency similar to Uranus and Neptune, which, together with structural models, could yield further insight into their compositions and interiors. The study of planetary obliquities may in fact be a new frontier in exoplanetary science, and this is just the beginning.

This post is based on the paper, "Obliquity-Driven Sculpting of Exoplanetary Systems" by Sarah Millholland and Gregory Laughlin. The original paper may be found at this URL. 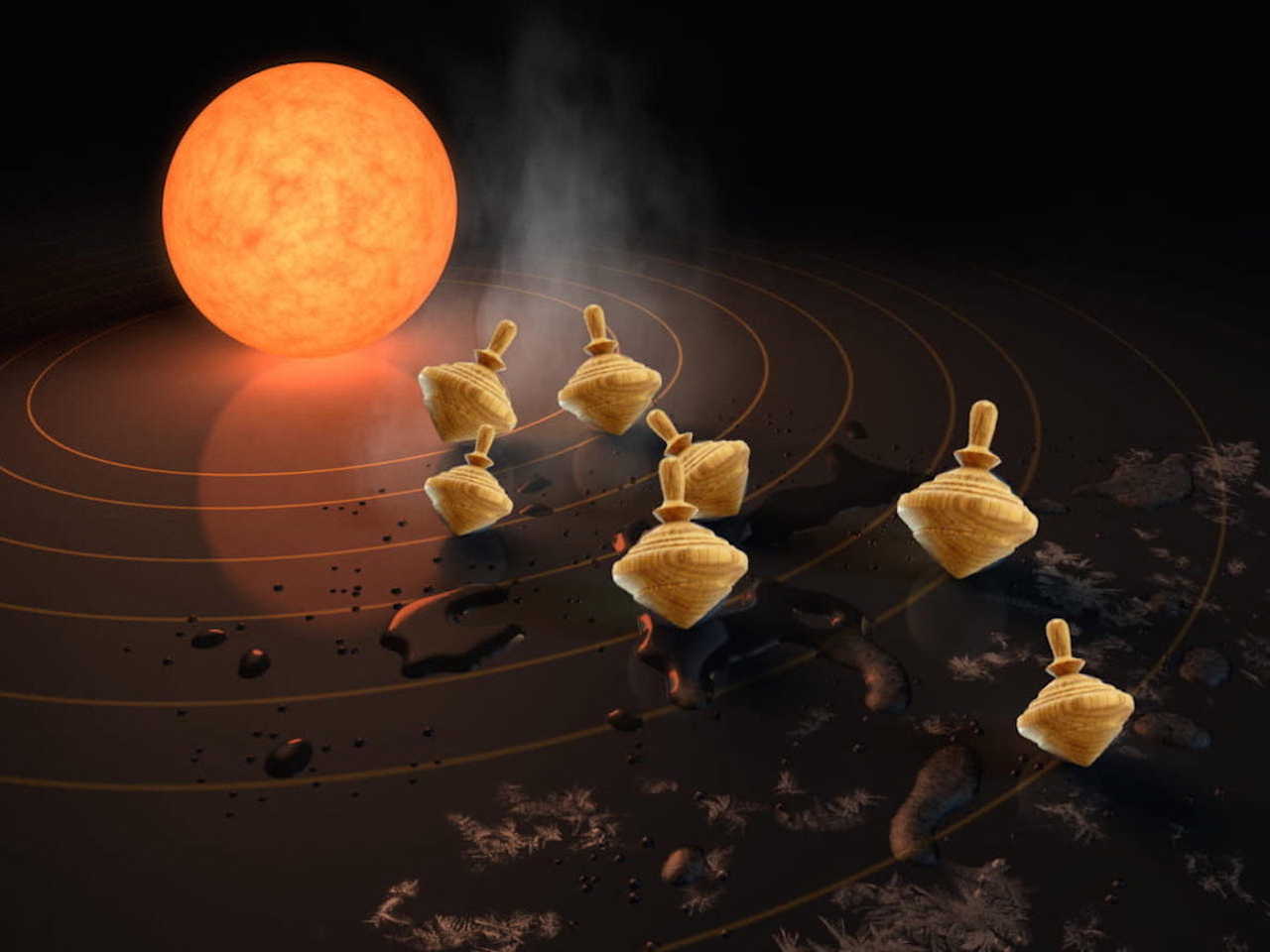 Planets are like tops spinning in space, each with a unique axial tilt. A surprising link between these tilts and the planets’ orbits may help explain a long-standing puzzle about planetary orbital architectures.