Deciphering the history of Enceladus and its sibling moons of Saturn

No larger than the British isles, Enceladus sports a subsurface ocean that should have frozen long ago. Its geological activity is powered by Saturn’s tides, which fade with distance. So why is Enceladus’ closer-in sibling Mimas, whose orbit should generate an order of magnitude more tidal action, utterly geologically dead?

Alyssa Rhoden and I tackled this puzzle in early 2016 from a geophysical angle, simulating the time evolution of the interior of each moon. We could reproduce Mimas but not obtain a present ocean on Enceladus.

Each moon was assumed alone orbiting Saturn. But the moons (Mimas, Enceladus, Tethys, Dione, Rhea, Titan and so on) and rings tug each other in subtle ways that can lead to all kinds of outcomes for the moon system. Geophysics wasn’t enough, we also had to consider orbital dynamics.

Dynamicists usually assume that the moons are point masses with some fixed level of tidal dissipation. We could go one step further: replace each point mass by a simulated moon with computed temperatures and material properties, with tidal dissipation depending on both the orbits and the geophysics.

Having coded the model, we tried a few educated guess scenarios in early 2017. We quickly hit the jackpot. In this scenario, a few billion years after formation, gravitational interactions with Dione send Tethys into orbital resonance with Enceladus. This makes Enceladus’s orbit very elliptical, producing intense tides that melt its icy interior into a water ocean that lasts about one billion years — until essentially today. In stark contrast, Mimas must form less than a billion years ago, otherwise interactions with contemporary or older rings expand its orbit beyond today’s. Its frigid interior is not prone to dissipating tides, so Mimas remains inactive.

It took months to test alternative scenarios and check our orbital model, simplified because today’s computers can’t track several moons every few hours (the orbital period) for 40,034,322,000,000+ hours (the age of the solar system), against a more sophisticated formulation. The final breakthrough came one night last April. In a struggle to benchmark the sophisticated model using a previous result from two independent papers, I suddenly had the intuition of a solution, changed a line in the code, and voilà! The previous work was reproduced, and we could confirm that the simpler model gave comparable, reasonable results.

We are lucky to have found a scenario that works. With myriad alternatives, it’s too early to tell if this is what actually happened to Saturn’s moons. But this outcome of a billion-year-old Enceladean ocean makes me wonder. One billion years after Earth formed, it was inhabited. One billion years is also short enough that chemical reactions between Enceladus’ ocean water and its rocky core, similar to those that sustain seafloor ecosystems on Earth, could still be ongoing.

This is further indication that Enceladus is habitable. Abode of life that — with likely no material exchange — emerged independently of Earth’s? Or habitable but lifeless world? Either way, the answer will transform our understanding of biology as a universal process. 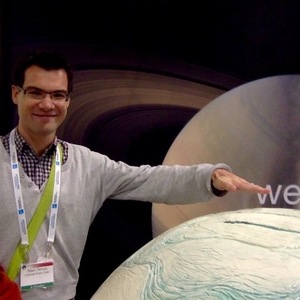 My main research interests are planetary exploration and astrobiology, the search for the origins, evolution, and distribution of life in the universe. Specifically, I seek to understand whether oceans below the surface of icy worlds harbor life by simulating their physics and chemistry, through laboratory and field studies of similar places on Earth where microbial life thrives, and by developing future space missions to explore these ocean worlds.
Follow