A hybrid mechanism works for massive stars in losing their weight

A huge mass of a massive star lost in the final stage of their evolution in two steps; first the hydrogen-rich outermost envelope is stripped away by a gravitational pull by a binary companion star, and then the helium-rich envelope is ejected by a strong stellar activity or wind.
Keiichi Maeda
Associate Professor, Department of Astronomy, Kyoto University
Follow
Like

In this work, more than fifty late-time nebular spectra of stripped-envelope supernovae are studied in order to understand more about the massive-star progenitors of these objects. Type Ib and IIb progenitors are largely indistinguishable; type Ic progenitors likely have more massive carbon–oxygen c…

The emerging picture of the massive star evolution in the final phase toward the supernova explosion. Credit: Keiichi Maeda

While massive stars are formed as a huge mass of hydrogen gas at their birth, they evolve to produce progressively heavier elements in their inner part, forming a characteristic onion-like structure with oxygen core, helium layer, and the outermost hydrogen layer from the inner to the outer part. A large fraction of massive stars shed their hydrogen and/or helium envelops into somewhere before the end of the lives as supernova explosions, but the mechanism which drives this mass loss has not yet been clarified, puzzling astronomers for decades.

This is the issue we tackled in the new paper published in Nature Astronomy. It is frequently useful to simplify a question, and then the present question would become like this; if the degree of envelope stripping depends on the initial mass of a star at birth or not. Indeed, there are two leading hypotheses; a binary interaction in which the companion star snatches the primary’s envelope, or a strong activity/wind with which the star itself blows off the envelope away by itself. The former effect is insensitive to the initial mass, while the latter effect is stronger selectively for a more massive star.

It is then an issue of mapping the degree of envelope stripping as a function of the initial mass, for particular classes of supernovae called stripped-envelope supernovae (SESNe); the progenitor stars of SESNe form a sequence of different degree of the envelope stripping. It is however practically challenging; the investigation requires the data which reflects an unbiased view of the whole ejecta structure, from the outermost layer (to study the condition of the envelope) to the innermost part (to derive the initial mass).

Hanindyo Kuncarayakti just graduated at that moment, and became a postdoc working with me in 2013. He then left to Chile and then to Finland, but our close collaboration (and family friendship) continues. The team largely owns him about the idea of deriving the initial mass using the oxygen and calcium emission lines in the late-time spectra. Qiliang Fang is particularly responsible for the development of the other idea, in deriving the amount of the helium layer using the nitrogen emission line. He started to work on this issue when he was an undergraduate student back in 2016. The work was completed in 2018 after he became a graduate student in our group at Kyoto University.

Putting this all together, Qiliang showed me the plot visualizing the relation between the strength of the nitrogen emission (i.e., the amount of the helium layer) and the oxygen/calcium emission (i.e., the initial mass). I was excited to see that a clear relation was there; the one-to-one relation between these two observables strongly indicates that a single quantity is responsible for the helium-layer stripping, that is the initial mass. On the other hand, if we compare two classes of SNe with different degree of the hydrogen-envelope stripping, their distributions are indistinguishable; the mechanism of the hydrogen stripping is not dependent on the initial mass.

The new picture then emerged. It is not a single mechanism. The envelope stripping is first triggered by the binary interaction when the star becomes a red supergiant. Once all or most of the hydrogen envelope is stripped away, then the binary system is detached. Further evolution is then determined by the nature of the star itself; if the star is sufficiently massive, the helium layer is ejected by a strong stellar activity or wind before the SN explosion.

The research field of SNe, or cosmic transient objects in general, is now expanding quickly. Various new observational projects have been discovering new phenomena, and existing theoretical ideas seem to fail to explain these new findings. New ideas are being developed, leading to new prediction to be tested by new generation observational facilities. This is the exciting era of SN and transient science, and I bet this will continue for coming decades. 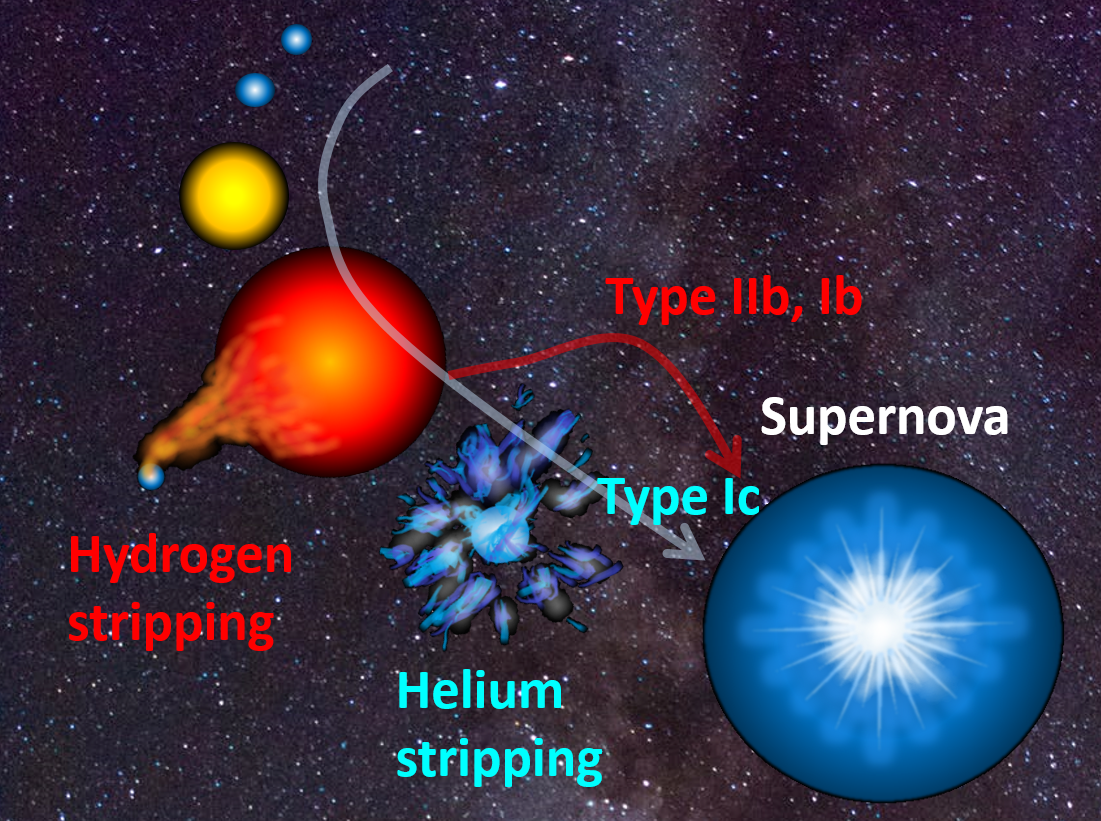 A hybrid mechanism works for massive stars in losing their weight

A huge mass of a massive star lost in the final stage of their evolution in two steps; first the hydrogen-rich outermost envelope is stripped away by a gravitational pull by a binary companion star, and then the helium-rich envelope is ejected by a strong stellar activity or wind.