Massive stars are important throughout the universe, not least for producing the heavy elements that make up our Earth and are in our bodies. However, their formation is literally shrouded in mystery, being so deeply embedded in dusty clouds where they are born. Most massive stars are thought to form with companions, in binaries or higher-order multiples. However, little is known about what massive binaries are like when they are still forming from their parent clouds.
Yichen Zhang
Postdoc Researcher, RIKEN
Follow
Like Be the first to like this
0

Dynamics of a massive binary at birth - Nature Astronomy

High-angular-resolution observations of 1.3 mm continuum and H30α recombination line emission identify a binary star system in formation, with protostars apparently separated by 180 au. The velocity difference between the two protostars constrains the orbital period and total mass of the system.

The formation of a massive binary system in the source IRAS07299-1651, about 1.7 kpc away, is the topic we address in our new paper published in Nature Astronomy (https://www.nature.com/articles/s41550-019-0718-y). This study is part of a project using the highest angular resolution available by the Atacama Large Millimeter/Submillimeter Array (ALMA) to map the 1.3 mm continuum and line emission from several massive protostars. In most of the regions of protostellar cores, especially at earlier stages, the continuum is expected to be dominated by thermal emission from dust, which can thus help probe the structures, such as infall envelopes and disks that are feeding the protostars. In IRAS07299-1651, we detected two bright continuum sources, separated on the sky by 180 au - clear evidence for a binary protostar!

ALMA’s view of the IRAS-07299 star-forming region and the massive binary system at its center. The background image shows dense, dusty streams of gas (shown in green) that appear to be flowing towards the center. Gas motions, as traced by the methanol molecule, that are towards us are shown in blue; motions away from us in red. The inset image shows a zoom-in view of the massive forming binary, with the brighter, primary protostar moving toward us shown in blue and the fainter, secondary protostar moving away from us shown in red. The blue and red dotted lines show an example of orbits of the primary and secondary spiraling around their center of mass (marked by the cross).

However, with a closer look we found significant fractions of free-free emission from ionized gas from these objects, which, along with the associated recombination line emission, turns out to be very useful for constraining the dynamics of the binary and the local gas flows. The hydrogen recombination lines of the primary and secondary show slightly different velocities, which can be explained by binary orbital motions. While massive forming binaries were detected before, this time we can constrain the system mass and other binary orbital properties from the dynamics. We determine that the total mass of the two protostars is at least 18 times that of our Sun, with the primary having at least 10 solar masses, and one full orbit is completed in no more than 600 years. This is an exciting first because so far essentially all information about the properties of massive binaries have come from observations of already formed stars, whose orbital properties may have evolved or changed since birth.

Furthermore, the hydrogen recombination line kinematics suggests a rotating disk of 10 au radius around the primary. At the same time, on larger scales, there are gas streams from about 10,000 au down to about 800 au from the center. The binary system, with a few hundred au separation (considering projection effect), fits very well into this multi-scale picture, in which we believe the large-scale streams feed a disk, which has fragmented to form the binary and may be still feeding the disks around the individual protostars. In such a situation the secondary is expected to grow preferentially to produce a binary system with near equal masses.

However, this circumbinary disk is not clearly seen in our observations with continuum or typical hot core molecular tracers. Whether this is caused by the disruption by the near-equal mass binary stars, or because the ionization or accretion shocks have destroyed the molecules, is an intriguing question for further investigation. It is important to look at other examples to see whether this is a unique situation or something that is common for the birth of all massive stars. 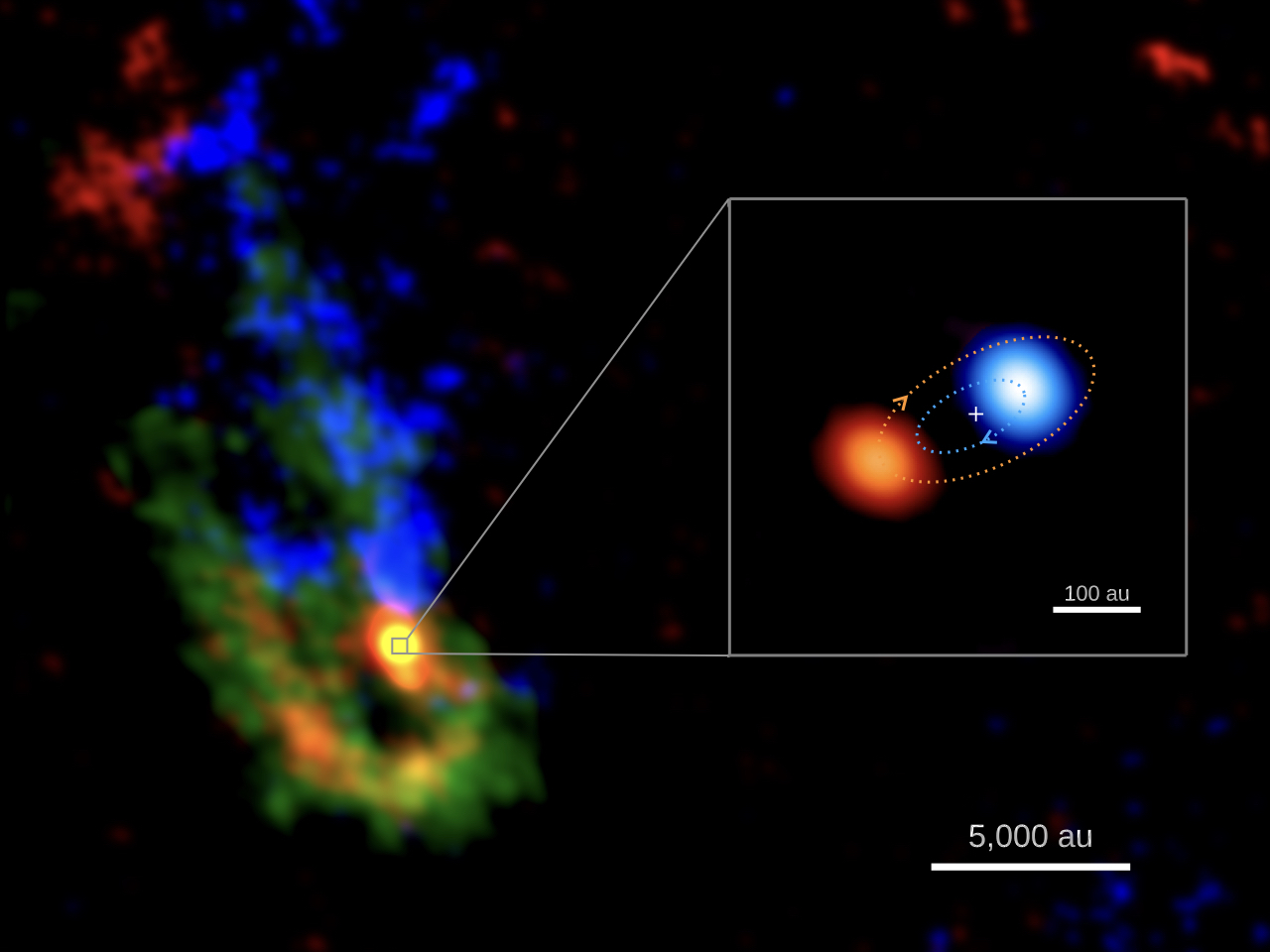 Massive stars are important throughout the universe, not least for producing the heavy elements that make up our Earth and are in our bodies. However, their formation is literally shrouded in mystery, being so deeply embedded in dusty clouds where they are born. Most massive stars are thought to form with companions, in binaries or higher-order multiples. However, little is known about what massive binaries are like when they are still forming from their parent clouds.