We provide observed stellar parameters of a cool subdwarf, which are used to validate for the first time the theoretical relations for such stars.

At its early stages the Milky was mainly composed of hydrogen and so were the first stars born. When these stars died exploding as supernovae or by becoming white dwarfs, the interstellar medium became enriched in heavier elements. Stars born from this material display higher traces of heavy elements than primordial stars, therefore young stars are expected to have higher metallicities than older ones. Currently, we can still observe some of these very old and very low-metallicity stars, known as cool subdwarfs. However, because they are intrinsically faint and relative rare, it has been impossible to measure both the mass and the radius for a single cool subdwarf star, leaving the theoretical relations of such stars untested.

My collaborators and I were working on updating the SDSS and LAMOST spectroscopic catalogues of white dwarf-main sequence binaries when we came up with a list of eclipsing systems, one of which had a very interesting spectrum. The blue part revealed the typical features of a hydrogen-rich white dwarf, the red part of the spectrum was dominated by the contribution of what seemed to be a "weird" low-mass star (see Figure 1). We shortly realized this was a cool subdwarf star. This discovery was very exciting since we had at hand the possibility to measure the mass and the radius of a cool subdwarf for the first time, thanks to the eclipsing nature of the system.

We were awarded with director's discretionary time at the Very Large telescope to obtain X-Shooter spectra of the cool subdwarf star from which we measured its radial velocities as well as derived its effective temperature and luminosity and estimated its metallicity (particularly the [Fe/H] abundance). We also used the Hipercam fast-speed camera mounted at the Gran Telescopio Canarias to sample the light-curves of the binary in five different band-passes. Our expectations were to sample the secondary eclipse of the binary (i.e. the transit of the white dwarf in front of the cool subdwarf), since this piece of information would dramatically help in deriving precise values of the mass and radius of the cool subdwarf. Fortunately, the sensitivity of Hipercam allowed such detection (see Figure 2).

Having obtained the stellar parameters of the cool subdwarf we compared the observed values to those expected from the theoretical relations for such stars. We found excellent agreement between the observed/expected values expect for the mass-radius relation, which predicted an star ~1% smaller (see Figure 3). This might be a simple consequence of the cool subdwarf being magnetically active, which results in overinflated radii as compared to inactive stars of the same effective temperature and mas.

The discovery of this very interesting eclipsing binary, together with the relevance of our results, motivated us to submit the paper to Nature Astronomy just before Christmas 2018. After a very smooth refereeing and editing processes, our paper was finally accepted for publication. The full paper can be accessed here.

The poster image used in this post is created by Mark Garlick. 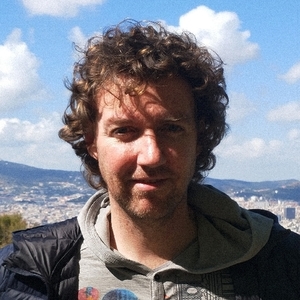