“One scientist’s noisy background is another scientist’s prime data”. This adaption of the familiar old saying summarizes the genesis of this study, which was published in Nature Geoscience.

In January of 2014, I was processing and validating data that were collected a few days earlier by the Neutral Mass Spectrometer (NMS) on board the Lunar Atmosphere and Dust Environment Explorer (LADEE) spacecraft. LADEE had been orbiting the Moon for only a few months and what was supposed to be a routine five-minute data processing task turned into a four-year long quest.

The processing of NMS’ compositional data calls for the subtraction of background noise generated by the outgassing of volatile species from the instrument, which occurred every time it was warmed up before an operation. As the mission progressed, the background levels were expected to monotonically decay, and to eventually stabilize. This was the case for most mass channels monitored by the instrument, except for the water channel. A more thorough evaluation of the dataset showed that water exhibited episodic but very pronounced variations. A quick review of all measurements collected thus far confirmed that this anomalous behavior was occurring since  the beginning of the mission. The fluctuations in the instrument water background, while very small, could not be ignored. Instrument backgrounds often result from the temporary exposure of the ultra-clean internal surfaces of the mass spectrometer to gases from the external environment. Some of these gas species end up adsorbing to the walls of the sensor. The slow release of these molecules takes place over the following hours and days and is detected as a slight increase in the measured instrument background.

After reviewing and discounting a multitude of possible instrumental effects, my colleagues and I settled on the possibility that the fluctuating backgrounds were hinting at the presence of a very small amount of water in the lunar tenuous atmosphere. The exospheric density was interpreted to be so small that it could not be detected directly by our sensitive mass spectrometer, but it was still enough to cause the instrument background to fluctuate. It was as if NMS was behaving like a sponge that was left outside on a humid night. While the high levels of moisture in the air would not be directly noticeable, the sponge would become soaked if left outside long enough. In a similar fashion, NMS was soaking up the moisture from the lunar exosphere, and the dampness of its walls were revealed by the increase in background levels observed by the instrument.

These observations raised several interesting questions; What process could release water into the lunar exosphere with such low but extremely variable levels? Was it possible to extract information about the medium from which this water was being sourced? To answer these questions, our team embarked on a four-year long study, that combined a thorough analysis of the data, a detailed analytical formulation of the behavior of the NMS instrument when exposed to water, and a high-fidelity numerical modeling of the behavior of water in the lunar exosphere.

This analysis revealed that the water fluctuations in the exosphere observed by NMS are due to the constant micrometeoroid bombardment of the lunar surface. The magnitude and frequency of the water releases observed by the instrument over its seven-month-long mission are correlated with the Moon encountering known meteoroid streams. Furthermore, by modeling how water is released into the exosphere by impact shocks, we found that the statistical distribution of the NMS observations is indicative of a lunar surface that has a dry layer of several centimeters on top of a uniformly hydrated soil. This finding is significant because it explains why observations from the Lunar Prospector’s Neutron Spectrometer measured a high average density of water-equivalent hydrogen in the bulk top meter of soil, while global mapping of the same regions using Chandrayaan-1’s spectral data did not yield measurable water in the top millimeter. Finally, by evaluating the amount of water that was escaping we concluded that two-thirds of the escaping water could not be attributed to recent syntheses from the solar wind or meteoroid impacts. It was either delivered long ago or was present at lunar formation.

These findings help complete our view of the global water cycle on the Moon. Past studies have already established that solar wind-implanted hydrogen is the main exogenous source of water production. Our results shed new light on how synthesized water can diffuse vertically and be sequestered deep in the regolith where it lingers until excavation by micrometeoroids striking the surface. The liberated water escapes or is redeposited elsewhere. These results lay the groundwork for future investigation into the origin and fate of volatiles on the Moon. They also provide a quantitative assessment of the water deposits that may be available for in situ resource utilization to support future manned and robotic exploration missions. 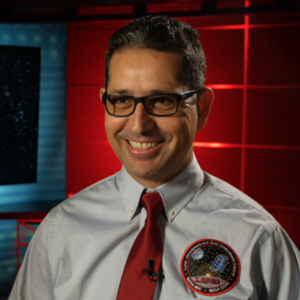 Dr. Benna’s research focuses on studying planetary magnetospheres, upper atmospheres, and exospheres. Besides his scientific work, he uses his engineering experience to support the development of several space-borne instruments. Dr. Benna has authored or coauthored more than 100 scientific articles in peer-reviewed journals, and more than 200 communications or invited presentations in international conferences related to the field of planetary science. His publications include articles on MHD modeling of planetary magnetospheres, comets and icy moons of the solar system, radiotomography techniques, and ill-posed inverse problems.
Follow