Continued measurements of comet 67P/Churyumov-Gerasimenko by Rosetta/VIRTIS suggest that the nucleus is dominated, from a thermal viewpoint, by phenomena linked to the morphology and the chemical and physical state of the uppermost surface layer, as thick as a few centimetres. In the shallow subsurface, the nucleus should still be substantially primordial, weakly affected by the previous passages around the Sun.

Rosetta was the first space mission to closely escort a comet on its journey around the Sun. Among the many discoveries made on comet 67P/Churyumov-Gerasimenko, Rosetta also achieved continued measurements of the surface temperature of a cometary nucleus with an unprecedented spatial resolution. The Visible and Infrared Thermal Imaging Spectrometer (VIRTIS) onboard the Rosetta orbiter captured infrared images of the comet’s nucleus, which were then turned into thermal maps. We were thus able to study changes in the nucleus temperature over almost two months in August and September 2014, about one year before the perihelion passage.

Comparison between surface temperature values as retrieved by VIRTIS on 22 August 2014 during a rotation of the nucleus of comet 67P (panel a), and surface temperature values simulated by a thermophysical model that assumes an uppermost surface layer dominated by dust, with minimal sublimation, projected onto a 3D digital shape model of the comet's nucleus (panel b). On the right, panel c displays the difference between the measured and predicted temperature values, with the green colour representing a substantial agreement. Note the prominent shadow casted by the small lobe on the big lobe of the nucleus during maximum insolation. 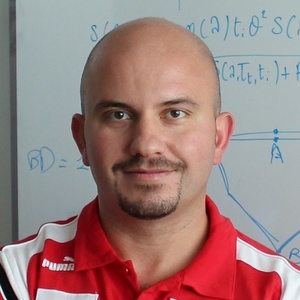 Federico Tosi is a staff research scientist at Italy's National Institute for Astrophysics (INAF) in Rome. From 2008 to 2012 he was a member of the international science definition team of JUpiter ICy moons Explorer (JUICE), the first European-led space mission devoted to explore the Jupiter system, with an emphasis on astrobiology. He mainly deals with the analysis of data returned by remote sensing instruments carried onboard NASA and ESA interplanetary space missions such as Cassini-Huygens, Rosetta, Dawn and Juno. His main research topic concerns the determination of physico-chemical properties of various bodies of the Solar System by means of multi-sensor data analysis. He is involved in 170 publications in international, peer-reviewed scientific journals.
Follow