Throughout the universe, stars come in different shapes, sizes and colours. Massive stars, those with masses more than ten times the mass of our Sun, live short lives before they explode as a supernova and form a black hole or neutron star. Amongst these supernova progenitors are blue supergiants, which are metal factories of the universe and provide fuel and energy for the next generation of stars and shape the evolution of their host galaxy. Although they are important in the chemical evolution of the cosmos, only a handful of blue supergiants have been studied in detail, so our understanding of the physics at work within their interiors is not well-constrained. Without high-precision space observations of blue supergiants, large uncertainties remain in state-of-the-art stellar structure and evolution models. The lack of a robust theory for massive stars is further complicated by a dearth of observational constraints on stellar rotation, the occurrence rate of massive stars in multiple systems, and the incidence and influence of magnetic fields.

Asteroseismology – the study of waves inside stars – allows us to probe stellar interiors from the flux variations on their surfaces. This methodology has been highly successful for low-mass stars like the Sun. However, high-precision photometric space telescope data, which are essential data for asteroseismology, have only recently become available for massive stars. Until now, asteroseismology was lacking the data to study the interiors of blue supergiants and parametrise the physics currently missing in stellar evolution models. The success of asteroseismology of massive stars depends on the detection and identification of gravity waves in the light curve of a star. These gravity waves are generated by turbulence at the boundary of the convective core and the radiative envelope inside a massive star, and propagate within a stably stratified medium transporting angular momentum and chemical elements.

This article presents the discovery of gravity waves in a large number of blue supergiants observed by the NASA K2 and Transiting Exoplanet Survey Satellite (TESS) missions. Our large sample of hot massive stars demonstrates the near-ubiquitous incidence of stochastic low-frequency variability in these stars, which is consistent with 2D and 3D numerical simulations of gravity waves excited by core convection. These waves offer an exciting new method for probing the interior physics and evolutionary stage of blue supergiants. Gravity waves are particularly sensitive to the core properties and can distinguish stars undergoing blue loops in the Hertzsprung-Russell diagram. Furthermore, the gravity wave morphology is demonstrated to be independent of the metallicity of the host star, as our sample includes dozens of blue supergiants within the low-metallicity environment of the Large Magellanic Cloud. No physical mechanism other than gravity waves excited at the convective core boundary is able to explain the common morphology of the stochastic low-frequency variability in such a diverse sample of metal-rich and metal-poor stars.

The future asteroseismic potential of hot massive stars is bright, with many more stars currently and soon to be observed by the TESS mission. An important goal of asteroseismology is to improve stellar structure and evolution theory, which is especially pertinent for massive stars. For understudied massive stars, we aim to probe the interior properties as a function of age, from their birth to their death as a supernova. Now with TESS mission data, we are beginning to mitigate the uncertainties in stellar structure and evolution models for some of the most massive stars in the universe.

The research leading to these results has received funding from the European Research Council (ERC) under the European Union’s Horizon 2020 research and innovation programme (grant agreement number 670519: MAMSIE). 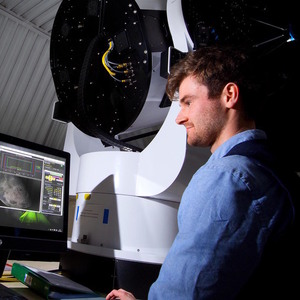