The Lunar Reconnaissance Orbiter (LRO) began its mission in 2009, almost 40 years after the historic Apollo 11 landing. Now, as we prepare to celebrate the 50th Anniversary of Apollo 11 this summer, a new link between the science of Apollo and LRO is changing our understanding of the Moon.
Thomas R. Watters
Senior Scientist, Smithsonian Institution
Follow
Like Liked by Ben Johnson and 1 other
0

Shallow moonquakes detected at four Apollo landing sites between 1969 and 1977 occurred during maximum stress and in close proximity to young faults, suggesting that the Moon is tectonically active, according to reanalyses of the seismic data and tidal force modelling.

This prominent lunar lobate thrust fault scarp is one of thousands discovered in Lunar Reconnaissance Orbiter Camera (LROC) images. The fault scarp or cliff is like a stair-step in the lunar landscape (left-pointing white arrows) formed when the near-surface crust is pushed together, breaks, and is thrust upward along a fault as the Moon contracts. Boulder fields,  patches of relatively high bright soil or regolith, are found on the scarp face and back scarp terrain (right-pointing arrows). Image LROC NAC frame M190844037LR. Credit: NASA/GSFC/Arizona State University/Smithsonian

One of the most unexpected discoveries of the LRO mission has been the detection of a vast network of small fault scarps, cliff-like landforms, virtually everywhere on the Moon. These fault scarps, formed as the lunar crust contracts and is pushed together, breaks and is thrust upward, are evidence of a shrinking Moon. Prior to LRO, only a relatively few of these small fault scarps were found in our highest resolution photographs of the lunar surface, mostly taken by the Apollo Panoramic Cameras. The most noteworthy of these is the Lee-Lincoln fault scarp in the Taurus-Littrow valley, very near the Apollo 17 landing site. 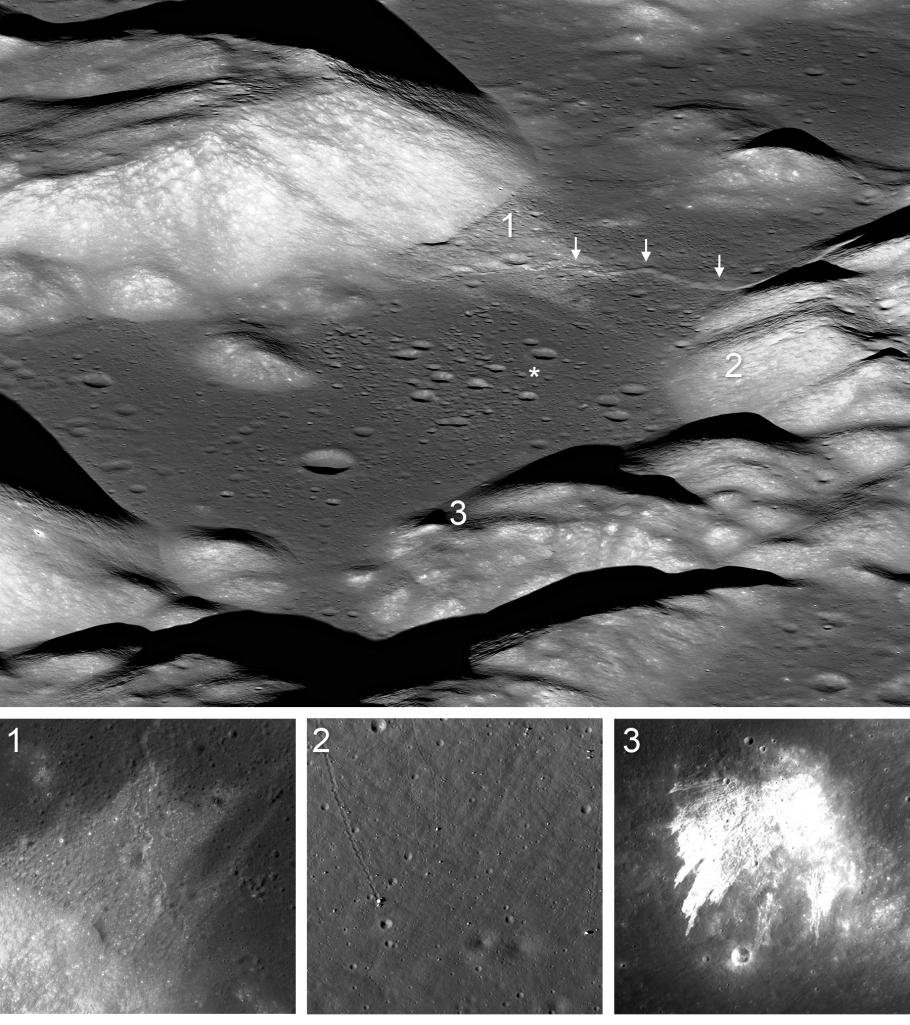 Taurus-Littrow valley is the location of the Apollo 17 landing site (asterisk). Cutting across the valley, just above the landing site, is the Lee-Lincoln fault scarp (arrows). Movement on the fault was the likely source of numerous moonquakes that triggered events in the valley. 1) Large landslides on of slopes of South Massif draped high albedo regolith on and over the Lee-Lincoln scarp.  2) Boulders rolled down the slopes of North Massif leaving tracks or narrow troughs in the regolith on the slopes of North Massif. 3) Landslides on southeastern slopes of the Sculptured Hills. Credit: NASA/GSFC/Arizona State University/Smithsonian

In images returned by the Lunar Reconnaissance Orbiter Camera (LROC) with its two Narrow Angle Cameras that can resolve objects on the surface as small a few meters, thousands of small fault scarps have now been mapped. As extraordinary as the sheer number of small fault scarps is their apparent age – they are young, formed very recently in the Moon’s geologic past. But just how recent, is recent? This is a difficult question to answer. Our ability to precisely date surfaces and landforms on the Moon and the other solid bodies in our solar system is limited, particularly if they are very young. So, how can data from the Apollo missions help?

Shallow moonquakes, like earthquakes, are expected to cause significant ground motion as seismic wave radiate outward from the source. This seismic shakemap shows the expected round motion for a slip event on a thrust fault (red line) associated with the Mandel’shtam scarp. The shakemap showing peak vertical acceleration for a moonquake of magnitude 6.36 Mw hypocenter at a depth of 350 m. Shades of blue, green, and white indicate areas where shaking is strong.  The regional topography is shown by the white contour lines (500 m contour interval). Credit: University of Maryland/Smithsonian

Active faulting is likely driven primarily by ongoing cooling of the Moon’s still-hot interior, but the broad pattern of the young fault scarps suggests tidal forces exerted by Earth also contribute. Tidal forces reach their maximum when the Moon’s orbit takes it furthest from Earth. Quakes are expected as forces build on a fault’s surface until it is released by slip along the fault. Our modeling indicates that six of the eight shallow moonquakes with epicenters nearest to a fault scarp occurred when tidal forces were at or near their peak.

Connecting shallow moonquakes to young fault scarps strongly suggests current lunar tectonic activity and that the Apollo seismometers recorded temblors of the shrinking Moon! The significance of this finding goes beyond the realization that a relatively small rocky body has remained, like Earth, tectonically active over billions of years. Just as on Earth, it is important to know the locations of active faults on the Moon because shallow moonquakes can result in moderate to strong seismic shaking - something to keep in mind when selecting sites for long-term lunar outposts. 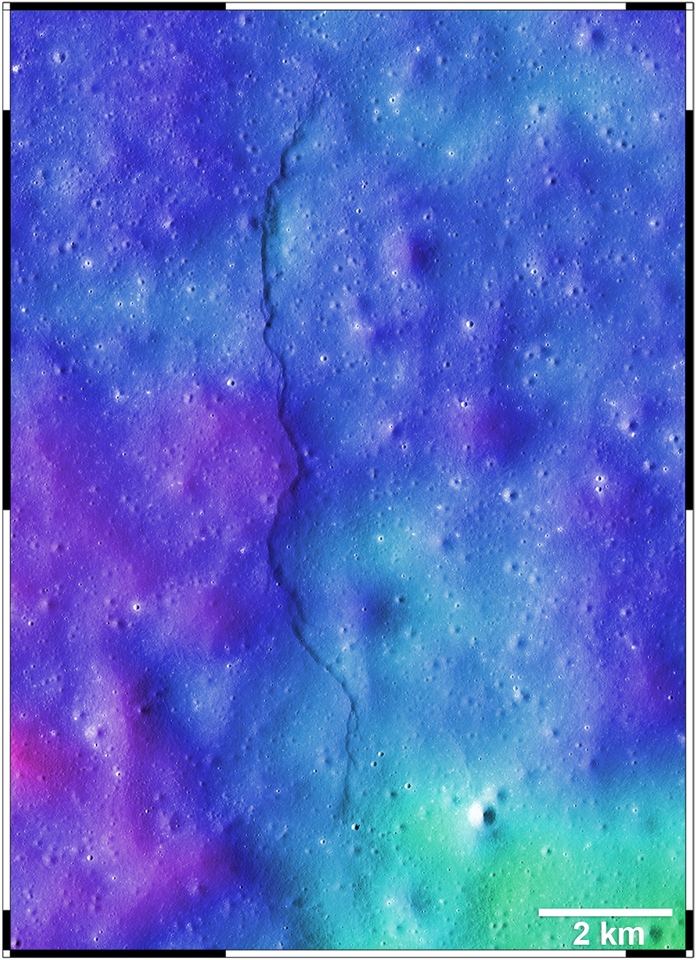 The Lunar Reconnaissance Orbiter (LRO) began its mission in 2009, almost 40 years after the historic Apollo 11 landing. Now, as we prepare to celebrate the 50th Anniversary of Apollo 11 this summer, a new link between the science of Apollo and LRO is changing our understanding of the Moon.