A unique star in the constellation Cassiopeia

The merger of two massive white dwarfs created a rapidly rotating and highly magnetized super-Chandrasekhar-mass white dwarf, which will collapse into a type Ic supernova within several thousand years and leave behind a low-mass neutron star.

Detection of nebulae around stars could serve as indication that these stars are in the final stages of their evolution or that they are or were members of interacting binary systems which have recently experienced non-conservative mass transfer or merger of the binary components. Using data from the Spitzer Space Telescope and the Wide-field Infrared Survey Explorer (WISE), we searched for infrared nebulae to reveal new examples of rare types of massive stars such as the luminous blue variables (LBVs), most of which are known to be associated with circumstellar nebulae. Indeed, follow up spectroscopy of central stars of the detected nebulae resulted in the discovery of several dozens LBVs and LBV-like stars, leading to the doubling of known stars of this type in the Milky Way.

One of the nebulae detected with WISE was found in the constellation Cassiopeia and its appearance was no different from the others. We therefore expected that its central star could also belong to the class of LBVs, i.e. to a rare but already familiar to us type of stars. In the summer of 2017, we obtained a spectrum of this star with the Russian 6-m telescope and what we saw exceeded our expectations. The obtained spectrum was reminiscent of very rare oxygen-rich (WO-type) Wolf-Rayet stars -- only four stars of this type are known in the Milky Way to date. These stars represent the final stage in the evolution of very massive stars and their lives end within a few thousand years with a core-collapse supernova explosion, accompanied by the formation of a neutron star or a black hole. The discovery of another star of this type is therefore of great interest for our understanding of massive star evolution and core-collapse supernova explosions.

The reality, however, turned out to be more interesting and unique. Using the Gaia distance for the star we found that its luminosity is four times lower than those of even the faintest massive WO-type Wolf–Rayet stars and at least about four times higher than those of the known low-mass (WO-type) central stars of planetary nebulae. At the same time, we found that the luminosity and other parameters of the star match remarkably well the recent models for the evolution of super-Chandrasekhar mass carbon-oxygen white-dwarf merger remnants. According to these models, the massive white-dwarf merger products can avoid thermonuclear explosion as type Ia supernovae and survive for tens of thousands of years before their final collapse. Moreover, within the framework of the massive white-dwarf merger scenario it is possible to explain such a unique characteristic of the star as an extraordinary high speed of its wind. Analysis of the stellar spectrum showed that the wind speed is 16,000 km/s, which is several times greater than the wind speed of any of the known stars. This enormous wind velocity could be understood if the merger of two white dwarfs created a fast-rotating and highly magnetized star, so that the rapid stellar rotation and the strong magnetic field aid the wind acceleration. Proceeding from this, we conclude that the star in Cassiopeia was formed recently from the merger of two massive white dwarfs and that it will explode as a type Ic supernova within the next few thousand years and leave behind a low-mass neutron star.

The leading authors of the paper (from left to right): Vasilii Gvaramadze, Götz
Gräfener and Norbert Langer. 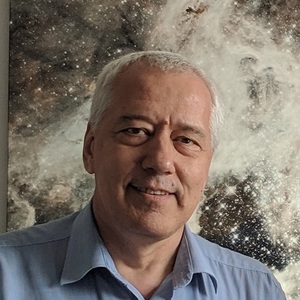 Vasilii Gvaramadze over 1 year ago
Reply