Radio observations reveal the origin of pulsating light from the Sun

The solar atmosphere produces the most powerful explosions in the solar system, often associated with pulsating radio emission. However, the cause of the pulsations is a modern enigma in solar physics. In a recent Nature Communications article, we use a combination of radio imaging-spectroscopy and magnetic field modelling to uncover the origins of this periodic radio signal from the Sun.
Dr Eoin Carley
Research Fellow, Trinity College Dublin & the Dublin Institute for Advanced Studies
Follow
Liked by Ruth Milne

Magnetohydrodynamic (MHD) waves and plasma instabilities can be studied during solar flares. Here the authors show evidence for an MHD sausage mode oscillation periodically triggering electron acceleration at a magnetic null point in the solar corona, indicating MHD oscillations in plasma can indire…

The solar atmosphere regularly erupts with huge amounts of energy, heating plasmas to temperatures in excess of 10 megakelvin and accelerating particles to near light-speed. The accelerated electrons emit light from gamma-rays to radio waves, sometimes showing highly regular and periodic intensity pulsations. However, the plasma processes that bring about these pulsations remains a hotly debated topic. The primary candidates are periodic magnetic reconnection, magnetohydrodynamic (MHD) oscillations, or some complex combination of both. Plasma dynamics of these processes can play out on timescales of seconds or less, so temporally resolving this behaviour in images is a modern challenge in observational astrophysics. One of the few ways to meet this challenge is through radio observations.

The Nançay Radioheliograph (NRH) is a dedicated solar radio interferometer located in central France, operated by the Nançay Radio Astronomy Section of the Paris Observatory. It is capable of producing low frequency, high-time resolution (0.25 seconds) observations of the Sun. For one event in particular, occurring on 18th April 2014, it was being used to monitor an eruption near the west limb of the Sun. While analysing the eruption, we noticed something unusual; a radio source repeatedly appearing and disappearing in a relatively quiet region of the solar atmosphere, where there was no eruption. We soon realised that this was a source of radio pulsations and we had stumbled upon a rare direct imaging of this phenomenon.

By combining the radio images with magnetic field modelling, we were able to determine that the radio source belonged to a concentration of magnetic fields in the solar atmosphere known as an 'active region'. The radio images from NRH showed the pulsation source was located at the magnetic footpoints on this active region, see Figure 1. Furthermore, using additional observations of the pulsations from a high-time resolution (0.1 second) Nançay spectrometer called Orfées (operating from 10-1000 MHz), we were able to show the pulsations had a steady 2.3 second period over the course of ~3 minutes.

Figure 1 - (a) A combination of magnetic field modelling (blue lines) and radio imaging at 228 MHz (red areas) allowed for a rare opportunity to image a pulsating radio source at low frequencies. (b) More detailed modelling of the region allowed to see the kind of magnetic topologies the radio source belonged to, taking place at magnetic footpoints of large magnetic loops in a coronal active region. (c) Light curves from both Nancay (228 MHz; black) and Orfées (208 MHz; orange)  revealed a steady period of 2.3 seconds over the course of approximately 3 minutes.

Spectroscopic analysis of the pulsations revealed they were a signature of repeated electron beam acceleration in the active region. This electron acceleration took place near a magnetic topology where we might expect magnetic reconnection to occur, which initially led us to believe that this was the responsible mechanism for the radio pulsations. However, the details of the emission over time and frequency revealed something slightly different.

When we generally observe pulsations they appear as quasi-periodic, owing to the stochastic dynamics of the reconnection process that is believed to drive them. In our case, the pulsations are highly regular, showing little (if any) signs of quasi-periodicity. A primary means by which this could happen is through the modulation of the emission through a type of oscillation in the corona known as an MHD sausage mode. Modelling of the environment from which the pulsations came revealed a small loop that could sustain such a sausage mode. This provided evidence for modulation of electron acceleration by an MHD oscillation, something that had been suggested in the past but rarely associated with such high-cadence imaging in the radio domain.

Figure 2 - (a) A detailed analysis of the radio pulsation region revealed a small loop at the pulsation origin. (b) Magnetic field modelling of the environment of this small loop determined that it could sustain a sausage mode oscillation of the order of 1 second and it was closely related in 3-dimensional space to the radio pulsation origin, making it a likely candidate in the origin of the pulsating radio source.

While we had evidence for periodic electron acceleration and the involvement of a sausage mode oscillation, the observations revealed one final and unexpected complexity. The pulsation flux spectrum had all the hallmarks of maser emission from a loss-cone instability, which is essentially an emission from electrons being confined in a magnetic trap in the solar atmosphere. This is much the same as an electrons confined in a 'magnetic bottle', studied in the context of magnetic confinement fusion plasmas. These results were surprising, given that we found evidence for three different plasma mechanisms (reconnection, MHD oscillations and masing) undergoing a complex interaction to bring about the intensity pulsations.

Figure 3 - (a) The flux density spectrum of a single pulsation from the Orfées spectrometer. This has all the hallmarks of electrons confined in a magnetic trap in the corona, allowing them to produce a loss-cone instability and resulting maser radio emission. (b) The unique aspect of this observations is that this maser emission is periodically modulated, meaning electrons are repeatedly injected into the trap.

The entirety of these observations can be explained by (i) an MHD sausage oscillation is established on a small loop in the corona, (ii) this oscillation triggers reconnection, which in turn results in a periodic acceleration of electron beams, and (iii) the electron beams are repeatedly fired into an adjacent magnetic trap in the corona where they modulate a maser emission in the trap.

The results are exciting because they show a complex interaction of several plasma mechanisms in bringing about solar radio pulsations. These plasma mechanisms are also not unique to the Sun, providing significant insight into plasma behaviour that often has a direct analogue in other astrophysical systems, such as stars and planetary magnetospheres, as well as magnetic confinement fusion plasmas studied in labs on on Earth. 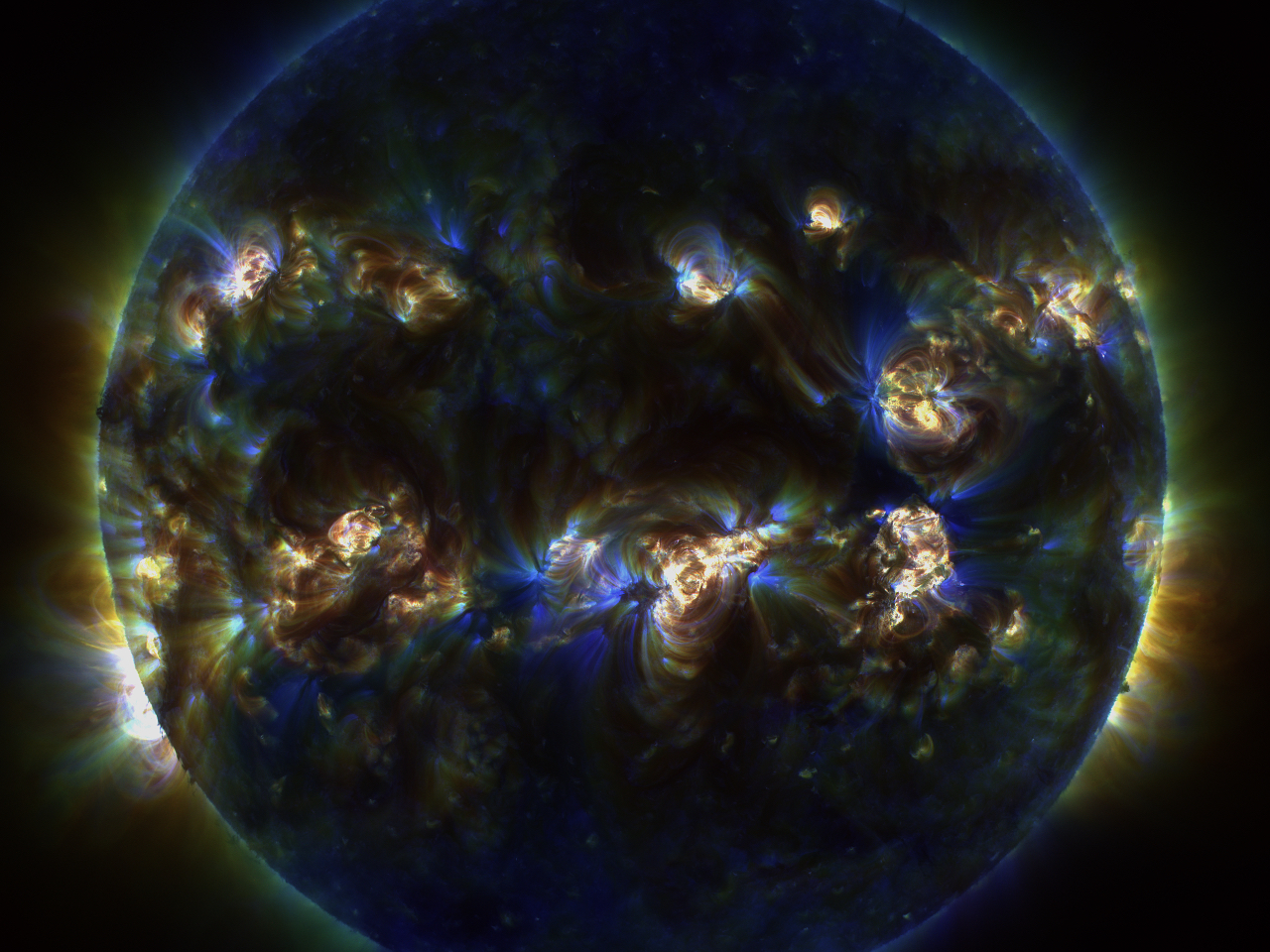 Radio observations reveal the origin of pulsating light from the Sun

The solar atmosphere produces the most powerful explosions in the solar system, often associated with pulsating radio emission. However, the cause of the pulsations is a modern enigma in solar physics. In a recent Nature Communications article, we use a combination of radio imaging-spectroscopy and magnetic field modelling to uncover the origins of this periodic radio signal from the Sun.