A community from Nature Research
Editor Nature
On the Road

Flying in a specially kitted Boeing 747 for the infrared telescope SOFIA at 41,000 ft was quite an experience, finds Leslie Sage.
May Chiao
Chief Editor, Nature Astronomy
Follow
Like Liked by Ruth Milne
0

On the night of Wednesday 22 May I flew on the Stratospheric Observatory For Infrared Astronomy (SOFIA), with the German Receiver for Astronomy at Terahertz frequencies (GREAT) installed.

SOFIA has come in for some criticism in the community, for failing to produce much in the way of cutting edge science. The detection of the helium hydride ion (HeH+) in a planetary nebula, published in Nature in April, was a notable exception, as was a large map of the Orion Molecular Cloud in the important cooling line of [C II], published in Nature in January.

Helium hydride was the “first molecule” to form in the Universe, as it cooled after the Big Bang. Although it is of course very unstable, it provided a pathway to form molecular hydrogen, out of which stars form.

In my experience, it is typically five years from first light to having a stable scientific observatory. SOFIA began science operations ten years ago, but it is a very complicated instrument. It does seem to be finding its feet now.

The 2.5m mirror can go between elevations of 23 and 60 degrees, with a plus-minus horizontal movement of 3 degrees. It is isolated from the aircraft – once it is locked on source, it tracks independently of the motion of the aircraft, sitting in its own inertial frame. Each flight has a unique flight path, with separate legs devoted to single sources. I asked why the telescope could not point to the zenith, where the air mass would be lowest. The answer is twofold. Importantly, it would be difficult to track a source for any length of time. But there was the practical matter of cutting a big hole in the side of an airplane.

The German Receiver for Astronomy at Terahertz frequencies (GREAT; pictured above) was installed. One of the important science objectives was to determine the boresight and beam calibration through observations of Jupiter. For valid science data it is essential to know exactly where the 21 pixels are on the sky. Mapping can have an offset, because the map can be corrected after the observation is done. But for point sources it is essential to get a pixel on the source.

Three flights were scheduled for the week of 20 May, with me due to fly the night of the 21st, and the 22nd as a backup. The flights on the 20th and 21st were both scrubbed due to weather. The aircraft flies under very strict rules about the allowable turbulence in the flight path. Every astronomer has had problems with weather on observing runs, but the grad student flying as guest observer for one of the science projects was very disappointed – this was her first observing run. The rest of us were more philosophical about it, but the instrument PI really wanted to get the boresight determination done before the aircraft deployed  to New Zealand for the southern hemisphere science observations.

We were nervous going into the flight briefing on the 22nd, but the pilots said that with some flight path modifications the mission was a go. I was in the cockpit jump seat for take-off.

Because the data are proprietary to the PI for one year, I can’t tell you specifically what we observed, though with the tuning range of the instrument (63-650 microns) I’m sure many of you can guess at least generally what we looked at.

The main objective of the flight was determining the boresight of the instrument, which had been taken out of the aircraft and rebuilt over the last six months. As it turns out, the absolute pointing was only off by 0.8 arcsec after the rebuild, and a pixel covers 6 arcsec on the sky at the frequency used for the calibration.

Overall, a successful flight, and although the science objectives of the week were not met, the highest priority boresight was done. The flights are scrubbed only about seven percent of the time. I just happened to be unlucky to be scheduled while some very unusual storm systems rolled in from the west. Several of the days in Palmdale the temperature struggled get above 55 F (13 C), which for the desert in late May is very unusual.

At this point, I would encourage astronomers who have projects that need far infrared observations to give SOFIA a go.

Posted by May Chiao on behalf of Leslie Sage

May Chiao
Chief Editor, Nature Astronomy
Follow
May started as a locum editor at Nature in 2003, and then joined the launch team of Nature Physics, handling a range of topics in the physical sciences. In 2016, she became Chief Editor of Nature Astronomy, which launched in 2017. May holds a physics degree from the University of British Columbia, and was a budding radio astronomer at the Herzberg Institute of Astrophysics in Ottawa. She changed course as a PhD student at McGill University, where she specialised in superconductivity. For her postdoctoral work at the University of Cambridge and the Swiss Federal Institute of Technology (ETH) Zurich, she further branched into quantum matter under extreme temperature, pressure and magnetic fields. As an editor she enjoys learning new things everyday.

The far side... of the Moon 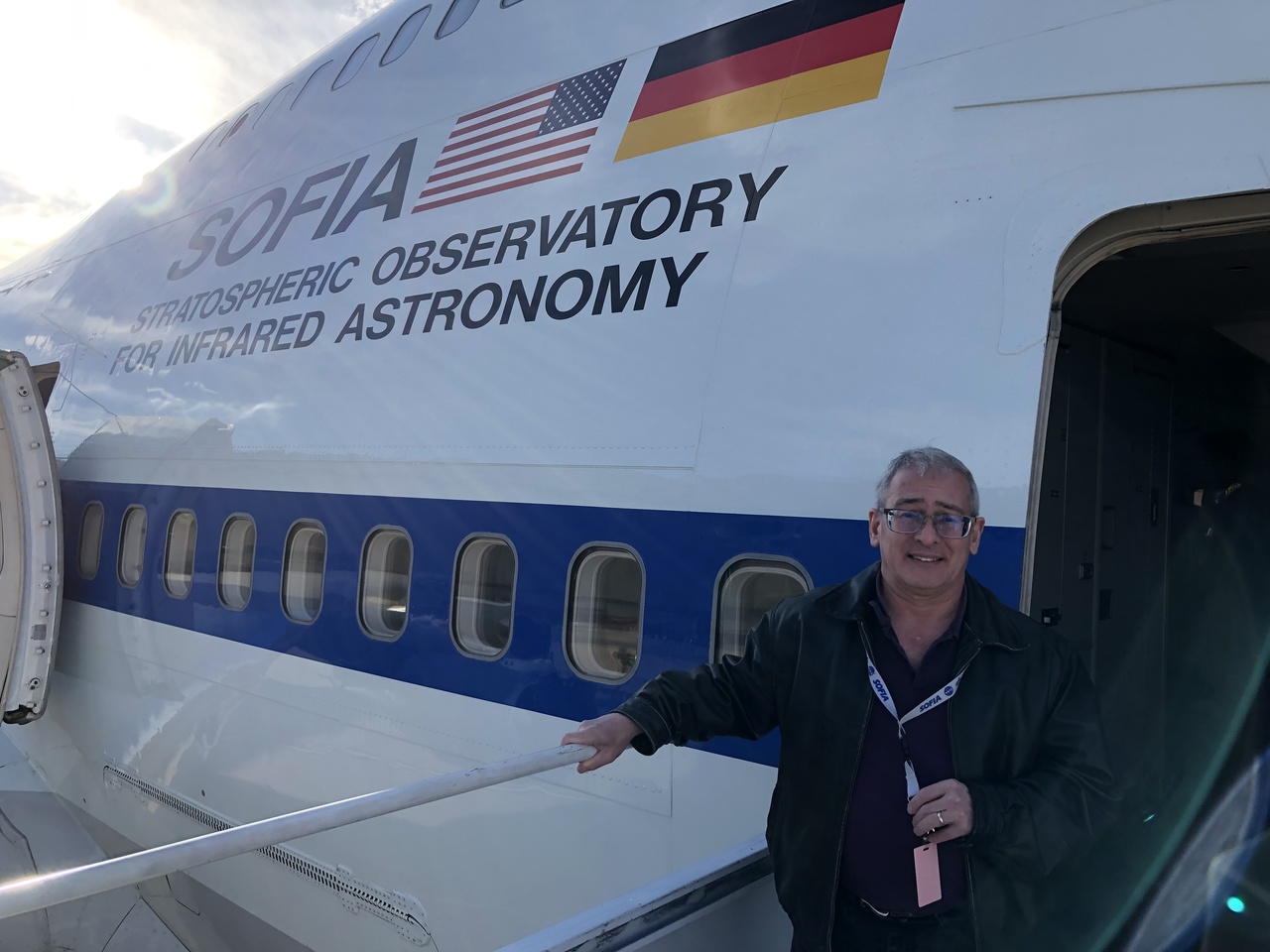 Flying in a specially kitted Boeing 747 for the infrared telescope SOFIA at 41,000 ft was quite an experience, finds Leslie Sage.