Ceres is remarkable for being a curious mixture between a mid-size icy moon and a mini-rocky planet. The tectonic history of this dwarf planet seems now more complex than previously thought, but confirming its unique, somewhat hybrid, nature.
Javier Ruiz
Associate Professor, Universidad Complutense de Madrid
Follow
Like Be the first to like this
0

Contractional features such as scarps, ridges and fractures from thrust faults are typical of large silicate bodies such as Mercury and Mars. Evidence for similar features on Ceres suggests the possibility of large-scale contraction on this icy body.

Surface features visible on Ceres are dominated by impact craters, although others related to the presence of volatiles are also presents. Also, a series of faults (including regional linear troughs, fractures and pit chains, as well as small fractures and troughs on crater floors) are evidence of extension of the Ceres surface, maybe related to secular freezing of its water component, which in turn would cause body expansion, as frequently deduced for icy bodies. Otherwise, geological features indicative of contraction were unknown on Ceres, whereas they are abundant on the terrestrial planets. For example, there are numerous and widely distributed thrust faults on Mercury, Mars and the Moon. This kind of fault consists of a low dip angle fault where a surface block has moved-up with respect to, and transported over, another block: this movement causes surface shortening and it is indicative of regional or global (if thrust are numerous and evenly distributed) body contraction. This implies that Mercury, Mars and the Moon must have experienced substantial global cooling and body shrinking.

Following a decade of "visiting" thrust faults on terrestrial planets (including terrestrial thrusts on the field), the sinuous surface trace of numerous Cerean ridges resembled us the trace of thrust on Mercury, Mars and the Moon. Most of these sinuous ridges are not associated however to obvious surface-breaking faults. Thus, we decided to conduct a careful survey of DAWN imagery to search for good candidates to be thrust faults. As a result, we have now found geological evidence of contraction of Ceres: we have identified fifteen scarps and ridges, which seem formed due to the action of thrust faults. Cerean thrusts are not as spectacular as those on Mercury or Mars, but there are some beautiful cases. For example, a fault that crosses the impact craters Kupalo and Juling, as well as the terrains between both, causes a scarp up to 3 km high, is visible on the internal wall of Kupalo, and clearly raises the floor of Juling, being maybe the more “visual” case between the identified features.

A large thrust fault generates the scarp crossing and deforming the craters Juling (left) and Kupalo (rigth). Digital Topography Models constructed by the UCM with data from the NASA/DAWN Mission.

The identification of thrust faults brings Ceres nearer to the terrestrial planets. However, reliable thrusts on Ceres are scarce, although it could be due to illumination effects and low fault displacements, and a global thrusts system has not been identified. On the other hand, the age of contraction is not well constrained, and some thrusts seem fresh, which would suggest that contraction occurred over a large fraction of the Cerean history. In any case, the identified thrusts confirm the unique nature of this dwarf planet, whose tectonic evolution included some degree of body contraction, maybe related to differentiation processes and prolonged in the time. 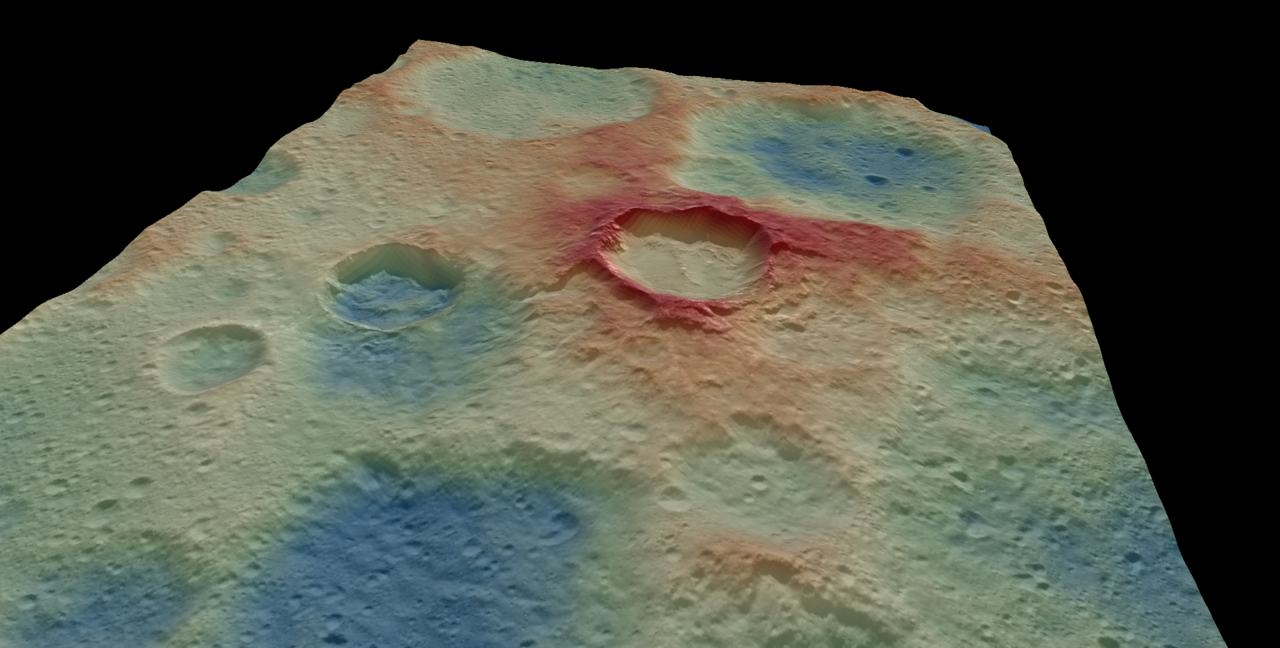 Ceres is remarkable for being a curious mixture between a mid-size icy moon and a mini-rocky planet. The tectonic history of this dwarf planet seems now more complex than previously thought, but confirming its unique, somewhat hybrid, nature.