In our paper, we report the discovery of a totally eclipsing binary system with an orbital period of only 6.91 minutes. The system consists of two white dwarfs orbiting each other in an orbit so close that the whole binary could fit completely inside of the planet Saturn.

ZTF J1539+5027 is a double white dwarf binary that is undergoing rapid orbital decay and currently has an orbital period of only 6.91 minutes. The Zwicky Transient Facility was the critical instrument in enabling this discovery. ZTF began its science operations on March 17th, 2018. However, before that, I began exploring techniques to find gravitational wave sources like ZTF J1539+5027 using optical time domain data. In the past, the primary technique for finding such gravitational wave sources consisted of looking either for some kind of out-bursting behavior from accreting AM CVn systems, or alternatively, via spectroscopic follow up of a color selected group of objects as was done with the ELM survey.

Instead of taking these avenues of approach, I focused on attempting to isolate these binaries by searching for periodic behavior in archival photometry. Before ZTF began operating, I discovered one such gravitational wave source in PTF data, and thus demonstrated that this approach to isolating these sources was possible. However, this time domain data had been sampled over the course of several years, and I was looking for periodic behavior on minute timescales--a computationally challenging task due to the enormous frequency grids involved. After some experimentation, I found a graphics processing unit (GPU) implementation of some period finding algorithms, and experienced an enormous speed up relative to traditional CPU based implementations. This enabled me to apply period finding on an "industrial" scale to millions of objects rather than thousands.

ZTF began its science operations on March 17th, 2018 and those individuals working on transients such as supernovae were already getting a fresh data stream; however, I had to be patient. This is because I was waiting on ZTF to accumulate enough epochs so that reasonably well sampled archival lightcurves could be generated for all the stars in its observing footprint. This finally occurred on June 6, 2018; however, I still had to spend 2 days downloading the files due to their immense size. Finally, on the evening of Friday, June 8th, I commenced my first period search of all objects in ZTF with more than 50 data points available at the time, without introducing any additional cuts on colors, variability, etc. Thanks to the remarkable power of GPUs, this task completed in 2 days, and on Sunday morning, while scrolling through a massive folder of phase-folded lightcurves, I encountered an odd one among them. I sent around this lightcurve saying "Not sure what to think of this one. The period here is very short. There is some gap in the phase coverage, but it falls exactly where one expects (at the faintest part)." I have included this discovery lightcurve below:

While skeptical, I put in a request to use the newly commissioned Kitt Peak Electron Multiplying CCD Demonstrator (KPED) to obtain rapid photometric follow up. The next morning, Monday June 11th, I phased folded the Kitt Peak Data and saw this:

It was at this moment I realized just how incredible this object was. Thanks to that deep eclipse, there was no ambiguity at all; this had to be an eclipsing binary with an orbital period of only 6.91 minutes. The entire experience was rather surreal, as I did not expect ZTF to yield such a gem in its first dataset, and it was remarkable to go from the files becoming available on a Wednesday, to having fully mined them and confirmed an incredibly exciting discovery by the following Monday. Soon thereafter, we produced a movie of what the object actually looks like through the Kitt Peak 2.1 meter telescope, shown below (note that this has been sped up--in real-time this takes 6.91 minutes):

Something we discuss briefly in the paper, but deserves more attention, is the mystery of how the carbon oxygen white dwarf in this system reached a 50,000K temperature. We offer some explanations, including the possibility of recent mass transfer; however, we are still seeking evidence of this. One solution we are pursuing is using the Hubble Space Telescope (HST) to obtain UV spectroscopy of the system, with the hope that this will reveal some evidence for accretion.

Another puzzle which persists is the remarkably cool temperature of the helium white dwarf in the system. We can only put an upper limit on the temperature of this object, because the binned data in eclipse are still consistent with a non-detection, even after spending enormous amounts of time conducting photometric follow up of the system. The reason this presents a puzzle, is that our estimates for tidal heating, as presented in the methods section of the paper, predict that this object should be tidally heated to around ~15,000K, but evidence seems to indicate that the object is significantly cooler than this. This system is perhaps one of the best examples of a system which can actually test models for tidal physics in white dwarfs, and thus will hopefully catalyze progress in this field.

Something we have also pondered is whether we can make significant statements about the rates of such objects based on this detection. The greatest complication in making any kind of statement concerning rates is that this object, ZTF J1539+5027, is a very outlandish pair of white dwarfs, with an unexplained extreme temperature ratio, which results in an strong reflection effect and total eclipse. This all results in an extremely strong periodic modulation that is easy to pick up on. However, other systems, like SDSS J0651+2844, exhibit much more subtle behavior. When using techniques such as period finding, there is enormous selection bias for a system like ZTF J1539+5027, and we must account for this selection bias before making statements about the rates of compact double white dwarfs in general based on this system, because we really don't know if most/all systems undergo a phase similar to ZTF J1539+5027 during their inspiral, or whether something particularly exotic has occurred in this system.

ZTF J1539+5027 has already taught us a lot about the nature of binary systems at these extremely short orbital periods, but it has raised many new questions and posed some rather perplexing puzzles, and it will likely continue to teach us much more as we continue to follow it up. Personally, I think the most exciting prospect of this discovery, is seeing that this pair of white dwarfs was far from the prototypical pair we expected, but instead exhibits very exotic behavior that is still difficult to explain. Some treat the white dwarf binaries of the LISA era as merely a background, or a collection of "verification sources." Personally, I am deeply excited at the prospect of suddenly having thousands of these systems to look at when LISA turns on, because if ZTF J1539+5027 is already challenging our physical understanding of these objects, then it seems almost certain that a sample of 10,000 such objects will be a scientific gold mine because it will present us with such a large number of exotic objects, all of which will contribute to further challenging our physical understanding of these systems. (note: photo credit for the cover photo of the piece goes to Jorge Lugo) 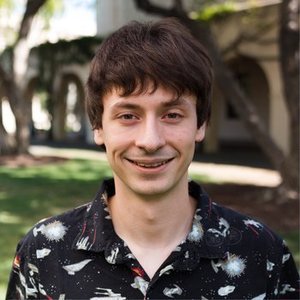