In the last 30 years or so, astronomical observation in the supra-terahertz frequency range (1-5 THz) have been dominated by superconducting devices, namely, hot electron bolometric mixers (HEBs). Breakthroughs in superconducting detector technology have led to major advancements in THz astronomy with both the Herschel Space Observatory and Stratospheric Observatory for Far Infrared Astronomy (SOFIA). But despite all design and optimization efforts, and restricted by intrinsic material properties, superconducting devices are not approaching quantum-limited detection. Moreover, their limited bandwidth complicates the observation of broad spectroscopic lines and, last but not least, the required Local Oscillator (LO) power is forbiddingly high for implementation of multiple pixel arrays.

Beyond superconductors, there are few materials that can fulfill the requirements needed for making THz detectors for astronomy. The advent of graphene promised the paradigm shift in terahertz sensing, thanks to its reduced heat capacity. A key obstacle in using graphene, however, has been the lack of a scalable technology for uniform doping of graphene close to the Dirac point. It is only close to the Dirac point that the concentration of electrons and their heat capacity in graphene are remarkably low. Recently, our group demonstrated a new technique of stable and non-volatile carrier density control of graphene, based on molecular assemblies (Nat. Comms. 9, 3956 (2018)). The method yields gateless doping of graphene to the Dirac point with very high uniformity over wafer-scale. As an outcome, the quality of molecular-doped graphene is on pair with (microscopic) graphene flakes encapsulated in hexagonal boron nitride (hBN), which is currently the benchmark of electronic quality in 2D materials, but, at the moment, not a wafer-scale technology.

Chemically engineered graphene displays the whole new regime of charge transport in which quantum-mechanical effects governs the heat and charge conductivity. In our work published in Nature Astronomy, we have explored this novel 2D composite system for heterodyne detection of THz signals and we find, experimentally and theoretically, that a heterodyne detector based on this material excels both in bandwidth and sensitivity. Moreover, the required local oscillator heterodyne power for our graphene device is PLO < 100 picowatt,  a few orders of magnitude less than that in state-of-the-art HEBs, and the measured bandwidth of 8 GHz on a proof-of concept device already matches the best values achievable in superconducting HEBs. According to our theoretical model, this graphene-based mixer has a potential to reach quantum-limited operation above 0.75 THz and a bandwidth exceeding 20 GHz. The performance of our graphene THz mixer improves drastically at lower temperatures, and thus can capitalize on all the efforts made over the last decade to build long lifetime (closed-cycle) and light cryocoolers for operation in space missions. In short, we see that our proof-of-concept detector (show in fig. 1) outperforms superconductors, making it an exciting material for implementing the next generation of quantum-limited THz detectors.

Fig. 1. Sketch of heterodyne mixing with graphene doped to the Dirac point. The terahertz signal at frequency fs is combined with a monochromatic wave emitted by a local oscillator at a nearby frequency fLO. The combined signal is fed into the graphene mixer via an integrated bow-tie antenna through a silicon lens. To match the resistance of the graphene sample to both the THz impedance of the antenna and the impedance of the IF readout amplifier, we used interdigitated electrodes, with a graphene length of L= 1.5 micrometer and a device width of W = 345 micrometer, resulting in nominally 230 squares of graphene in parallel.

Scalability, needed for long-sought-after mixer arrays, is definitely foreseeable in our material. Together with the low heterodyne power requirements, it is tempting to envision building a large matrix of THz sensors able to measure the THz signal power down to single-photon level, and the frequency down to 1 millionth fraction. Such arrays could allow imaging large portions of a star-forming clouds, and not so remote galaxies, in orders-of-magnitude shorter times.

We truly hope that our results will trigger new efforts in these fields and, hopefully, lead to a graphene THz detector operating on a space mission!

Link to the paper 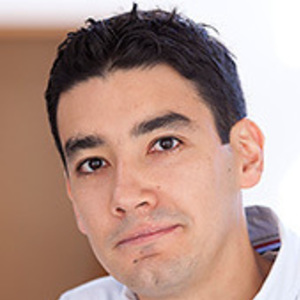