The first astronomical spectra captured with an intrinsically scalable, integrated superconducting spectrometer demonstrates the potential of this technology for creating ultra-wideband 3D imaging spectrometers in the mm-submm band.

Compared to the vastness of the Universe, current instruments for astronomy are able to analyze only a painfully small amount of light. For a good submillimeter-wave telescope (with a decadal spectral bandwidth and a field-of-view of a fraction of a degree), monochromatic cameras can throw away some 90% of the photons, depending on their selectivity in spectral, spatial, and polarization modes of light. For single-pixel spectrometers this fraction can be much worse than 99%. In order to simultaneously observe light collected from more angles and a wider spectral bandwidth, future astronomical instruments must compress much more functionality into a small volume: Yes, because the instrument still needs to fit in the telescope cabin!

Our recent Letter in Nature Astronomy reports the first on-sky demonstration of a new technology, the integrated superconducting spectrometer (ISS). The spectral resolution and spectral bandwidth of a diffraction grating, of the size of an adult's bicycle wheel, is on an integrated circuit (IC) chip as small as a USB memory stick. This chip uses superconducting electronics threefold: 1) a superconducting antenna couples the light from the telescope to the circuit, 2) a superconducting filter bank sorts the light into 49 spectral channels, and 3) superconducting microwave kinetic inductance detectors (MKIDs) measure the power of light in each channel. The virtue of this technology is its scalability. By increasing the number of channels one can proportionally widen the spectral coverage, and by placing many chips in a grid one can construct an imaging spectrometer (an "astronomer's dream" instrument that has many camera-like pixels, where each pixel is also a spectrometer).

The ISS hardware was developed in the Netherlands, and this was installed on the Japanese 10 m telescope Atacama Submillimeter Telescope Experiment (ASTE), located in the Atacama Desert of Chile. The name of the instrument DESHIMA (DEep Spectroscopic HIgh-redshift MApper) is a commemoration of the Dutch-Japanese trading post 'Deshima' (出島), which used to be the ‘quantum point-contact’ between the two nations in the 17–19th centuries.

Anyone who has field-tested a new instrument knows how difficult it is compared to a laboratory experiment: field-testing a new technology is even harder. Thanks to the construction of the instrument that was very well thought over by SRON instrument-scientists and engineers, and the highly experienced experimental astronomers from Japan, we were able to thoroughly test the performance of DESHIMA on ASTE during the 3 months in the Atacama. The most important outcome is that the on-sky sensitivity can be fully explained by atmospheric foreground photon-noise and the system optical efficiency. This means that there are no signs of performance degradation compared to the design, and the performance measured in the lab. From now on, we can improve the performance in the lab and expect it to perform accordingly on sky.

Our next goal is to increase the bandwidth of DESHIMA to an octave, and improve the optical efficiency. This will allow us to measure the spectroscopic redshift of dusty star-forming galaxies in the early Universe (we show some sensitivity curves in the Letter). We believe that future ISS-based imaging spectrometers will be able to analyze a large fraction of photons collected by millimeter-submillimeter telescopes. Such instruments will allow the exploration of cosmic large-scale structures with an unprecedented sensitivity and spatial scales, depicting the 3D distribution of galaxies with abundant molecular and atomic lines across the cosmological volume and time. 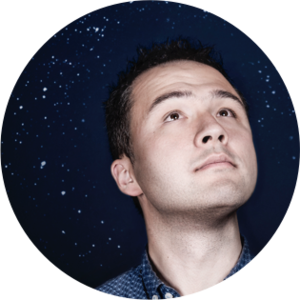 May Chiao
almost 2 years ago

Wow, that cryostat is really amazing! Looking forward to seeing DESHIMA go from strength to strength...