About 10% of stars with more than ~1.5 solar mass have strong, large-scale surface magnetic fields. When they explode in supernovae, they probably forge the strongest magnets in the Universe, highly-magnetised neutron stars known as magnetars. But what is the origin of their strong magnetic fields?
Fabian Schneider
Gliese Postdoctoral Research Fellow, Heidelberg University
Follow
Like Liked by Ruth Milne and 1 other
0

Stellar mergers as the origin of magnetic massive stars - Nature

Simulated mergers of two massive stars provide a solution to the long-standing puzzle of the origin of strong magnetic fields in a subset of massive stars.

The Universe is threaded by magnetic fields. They are found on essentially all scales from within clusters of galaxies down to planets. Also the Sun has a magnetic field that gives rise to sun spots, solar flares and other energetic surface phenomena. Today, we know that the Sun's magnetic field is produced in-situ in its boiling (convective) envelope (see photograph of Sun's turbulent surface below). More massive stars do not have such boiling envelopes and are thus not expected to show surface magnetic fields. Still, in 1947, Babcock discovered just such a field in the star 78 Virginis and we now know that about 10% of massive stars are magnetic (we will use the term "massive" here to denote stars with more than ~1.5 solar masses). At the end of their lives, magnetic massive stars with more than ~8 solar mass are thought to explode in supernovae to form highly-magnetic neutron stars, so called magnetars, while their lower-mass counterparts may leave behind highly-magnetic white dwarfs.

There are several ideas as to why some massive stars have strong magnetic fields. Quite naturally, some scientists suggested that stars might simply inherit an already existing magnetic field from the molecular cloud from which they formed. Another idea proposed that, during the star formation process, when the outer layers of proto-stars are much more turbulent (similar to the envelope of the Sun), a magnetic field might have been formed temporarily. Once the envelope ceases to be so turbulent, the field could have been frozen into the star. However, such ideas share one problem: they predict that all massive stars should have a strong magnetic field but it is only a rather small fraction of ~10% that is magnetic.

To circumvent this problem, the idea came up that magnetic fields may result from the merger of two stars. As with the second idea mentioned above, the generated magnetic field would be frozen into the post-merger star and thereby be visible today. Indeed, astronomers expect that about 10% of all massive stars in the Milky Way are the products of mergers - is this just a coincidence?

Another piece of evidence that points into the same direction is an observed dearth of magnetic stars in close binaries. If mergers of two orbiting stars produce magnetic stars in the first place, observing a binary with one magnetic and one non-magnetic component today implies that the present-day binary was a triple star system in the past. Fitting three stars into stable orbits such that the remaining two stars orbit each other closely after the merger is difficult from the point of view of orbital dynamics. Magnetic stars in close binaries should therefore not occur frequently if merging produces magnetic stars.

In 2016, we put the merger hypothesis to a test. The merger process can lead to observable signatures. In particular, when two main-sequence stars merge, the merged product rejuvenates because fresh fuel is mixed into its core, thereby prolonging its lifetime. Rejuvenated stars stand out as blue stragglers in star clusters and so we searched for such objects with magnetic fields. We quickly found two candidates that appeared anomalously young compared to other stars that were thought to have formed at the same time. Even more so, the expected age discrepancy was consistent with being due to a past merger. The plot thickened.

One of the candidates is the star Tau Scorpii (Tau Sco) in the Upper Scorpius Association whose observed surface magnetic field is illustrated above. This is a ~17 solar mass star whose apparent age of <5 Myr is much too young compared to the ~11 Myr old Upper Sco Association and our rejuvenation expectations showed that the merger of a 9 and a 8 solar mass star could explain the age discrepancy. With these results, I went to a binary star conference in Cambridge (UK), where I wanted to explain this new finding and the new method to probe the merger hypothesis to my colleagues.

At this conference, I met Sebastian Ohlmann, back then a graduate student in Heidelberg, who made three dimensional (3D) simulations of so-called common envelope events where a small star is dragged into the extended envelope of a giant. These simulations showed that magnetic fields are produced by the gas flow around the small star spiraling into the giant's envelope. They were run with the novel Arepo code that employs a so-called moving mesh. Arepo is well known from the seminal Illustris simulations of cosmological structure formation. Here, it was adjusted and applied to astrophysical applications. The significance of Sebastian's work for mergers were immediately obvious. In the following days and over several pints of beer in the beautiful pubs of Cambridge, Sebastian and I discussed possibilities to conduct simulations similar to his common-envelope work but this time for mergers of two massive stars.

Massive star merger (density) from Fabian Schneider on Vimeo.
The above video shows the result of the merger simulation of a 9 and a 8 solar mass star where the colouring indicates the (logarithmic) gas density in the orbital plane. Provided times are in days and are relative to the point when the cores of the two former stars merge.

Back in Heidelberg and Oxford, we pushed on and after customary failures and setbacks, we were finally able to conduct the 3D simulations and also import the merger remnant back into a one-dimensional (1D) stellar evolution code. In 3D, it is possible to simulate the dynamical merger phase which lasts days to weeks, whereas with the 1D computations we can see how our merged star evolves over millions of years up to its supernova stage. Right after the merger, the star is far from its equilibrium state. Orbital energy and angular momentum have been pumped into the merger remnant and a relaxation phase sets in. The merged product is overly dense and hot in the core which results in enhanced nuclear burning. The burning then causes structural changes in the interior of the star and, for example, leads to an expansion of the outer layers.

After this relaxation phase (which lasts for about 1,000-10,000 years), the star is back in full equilibrium and continues its "normal" evolution towards core collapse and supernova. It was quite a surprise when we saw how well our model after relaxation matches Tau Sco: the effective temperature, the surface gravity, the slow spin, the luminosity and also the magnetic nature are in good agreement with the observations. The model is of course not perfect, the luminosity is somewhat too high and we cannot (yet) reproduce the chemical mixing that is observed in Tau Sco. Also, the final spin of the merger remnant appears to be quite sensitive to what happens right after the merger - a phase that we cannot model at the moment with the required details. So as with any research, open questions remain and unexpected aspects arise.

In the past, magnetic massive stars have been suggested to be the progenitors of highly-magnetic white dwarfs and neutron stars. The latter are thought to be the strongest magnets in the Universe, up to 100 million times stronger than any magnetic field produced by humans today. So what are our models telling us about these interesting objects? Tau Sco is massive enough that it will explode in a supernova at the end of its life. From our models we can try to estimate what the magnetic field in the core of Tau Sco is when it explodes. However, this needs extrapolation from a few days after the merger to millions of years thereafter... There are many things that can happen to the magnetic field generated in the merger over such a long time. Still, if only a small fraction - say 1% - of the magnetic flux in the core of the star right after the merger survives until the end of the star's life, it would be sufficient to explain the inferred magnetic field strengths of magnetars! This too was a big surprise to us and makes our model a promising way to explain the origin of these extremely strong magnetic fields.

Some rare transients, so-called long-duration gamma ray bursts and super-luminous supernovae, may be driven by strong magnetic fields, too. These transients are so rare (maybe 1 in every 1,000-10,000 core collapse supernovae) that they cannot be linked to mergers that produce magnetic massive stars (about 1 out of 10 core collapse supernovae is from a magnetic star). However, our work has shown that merging likely produces strong magnetic fields and there are already suggestions in the literature that much rarer mergers, e.g. during a common envelope phase, may provide the right conditions to power these exotic transients. 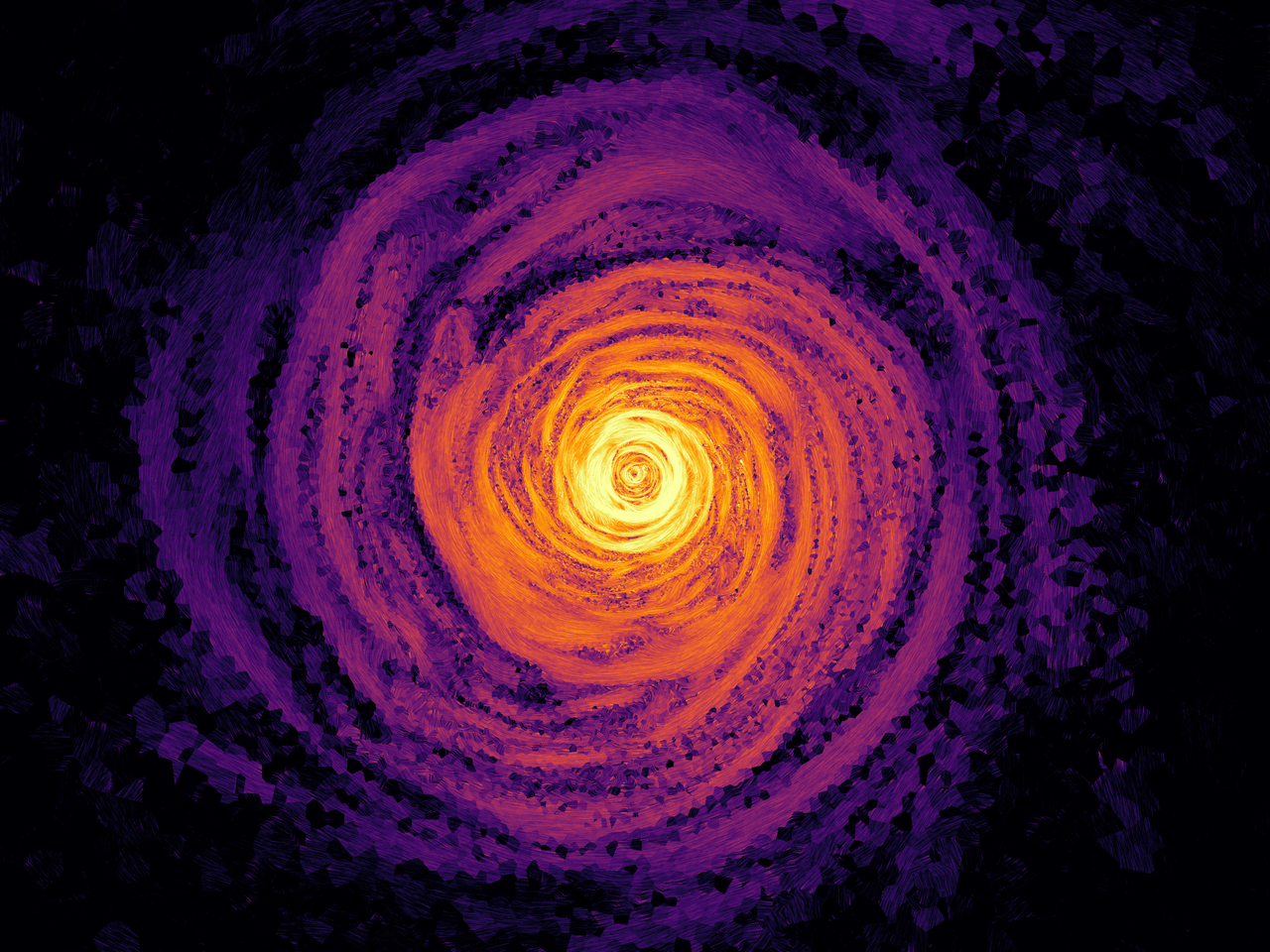 About 10% of stars with more than ~1.5 solar mass have strong, large-scale surface magnetic fields. When they explode in supernovae, they probably forge the strongest magnets in the Universe, highly-magnetised neutron stars known as magnetars. But what is the origin of their strong magnetic fields?