Significant amounts of dust can be produced in the aftermath of a supernova explosion. We made the first images that resolve the dust produced by the explosion from SN 1987A, and found some interesting results along the way.
Phil Cigan
Postdoctoral Research Associate, Cardiff University
Follow
Like Liked by Ruth Milne
0

We present high angular resolution (∼80 mas) ALMA continuum images of the SN 1987A system, together with CO J = 2 1, J = 6 5, and SiO J = 5 4 to J = 7 6 images, which clearly resolve the ejecta (dust continuum and molecules) and ring (synchrotron continuum) components. Dust in the ejecta is asym…

This paper surprised us all.  It was supposed to be a relatively quick and easy job: measure the brightness of the dust inside the heart of a star that we saw explode 30 years ago, fit the shape of the spectrum that described its glow in the far infrared bands and try to determine the properties of the dust grains. All things we had experience with before, and yet… The data products required great care due to known difficulties in observing at these bands using the available technology, and because SN 1987A is such an important target for many subfields of astronomy, we knew many people would be casting very keen and critical eyes on the results. We needed to be completely satisfied that the data processing and analysis were as robust as we could make them.  It was a long road to the finish line, but the data contained a wealth of extra goodies that we encountered along the way.

SN 1987A was the first supernova observed from Earth in 1987 (hence the name).  It’s a unique laboratory to study the process of making dust in a supernova, partly because it’s quite recent, so we have been able to use modern instruments to track its evolution. Importantly, though, at a distance of about 168,000 light years in the Large Magellanic Cloud, it’s the only young supernova close enough to resolve its features as it evolves. It’s the archetype for many areas of supernova physics and chemistry models. One major unresolved area with this supernova is the status of what happened to its core, predicted to be a neutron star (the dense, compact core of the star predicted to remain after the explosion by our current understanding of stellar evolution).  Even now, we still haven’t detected any direct signal from the star since the initial burst of neutrinos heralding the collapse of the core.  In our work, we observed the light from dust and CO and SiO molecules in SN 1987A at higher resolution than any previous study, using a telescope called ALMA in the Chilean high desert which can measure the light from these particles in the far-infrared to millimeter-wavelength part of the spectrum.  ALMA allowed us to see dust clumps at angular scales of 0.08 arcseconds, which is equivalent to resolving a ping pong ball from 100km away.  At the distance of SN 1987A, that equates to about 40 times the size of our Solar System. The new observations have roughly 460 times finer detail than the famous observation that discovered the cool dust in 2011 using ESA’s Herschel Space Observatory, and almost 4 times finer detail than the first ALMA observations the following year.

We originally intended for this paper to be quite short.  We reduced our data just after receiving them at the end of 2015, and performed several quality checks over the course of several weeks.  They looked beautiful, and we sensed already that the results would be impressive.  Next, we dove right in to the analysis, fitting the spectrum to derive the dust mass and temperature.  The results were consistent with what members of our team had found in earlier works, so we knew we were on the right track, and we started writing the results.  Then serendipity struck.  Fran Abellán was looking at the way that cool CO and SiO molecules (as seen through observing the CO 2-1 and SiO 5-4 & 6-5 line emission) were distributed in the ejecta (published in 2017). We realized that our new CO 6-5 image looked different from the CO 2-1 image, but we didn’t understand why. We noticed something surprising when comparing the whole catalogue of molecular line detections with the dust: the dust emission looked like the inverse of the CO 6-5 emission - an anti-correlation.  Intriguingly, that data came from the exact same contiguous data set, observed at the same time as the high resolution dust data. This led us to realize that this is a robust result, it could not have been due to time variability of SN 1987A itself, or any instrument/weather issues since this would be the same for the whole data set.

We started to investigate this more, trying to decipher what it all means.  Along the way, with every avenue we tested, we found potential issues with the data that needed to be checked.  For example, were we able to successfully separate the images into pure dust and molecular line images?  The dust emits light across a wide range of the spectrum, and needs to be carefully isolated from the narrow CO and SiO emission so that the relative fluxes reflect the true levels. On the other hand, there could have been light from extra molecules contaminating our dust signal. In the end, we found that there was no discernible contamination.  Was the pointing accuracy good enough to say that these features were actually separated?  We saw that the features were comfortably separated by more than the uncertainty related to the observations. How could we actually test and give a quantifiable measure of the level of anti-correlation in a whole image?  We solved this by using basic cross-correlation. All these things and more required careful thought, testing, and often consultation with other experts to make sure we were doing things right.

Along the way, we would update colleagues and present the interim results at conferences, which gave us useful feedback.  As it got larger and larger, we split the paper into two separate works, but eventually combined everything back into one, since it's all so inter-related.  At one stage we realized some predispositions were interfering with the science we could do.  Fitting the dust mass with the general function we had previously used was perfectly fine, but we could extract more information by using more specific dust models measured in labs or generated from theory.  The problem: which ones to use?  Typically researchers have a small handful of their favorites, partly because it takes a lot of effort to find the different model data and format them to suit your needs.  The solution: we scoured papers and databases to collect all the model data we could, and format them in a uniform way.  Having a vast collection of different models on hand really allowed us to delve deeply into the different possibilities of dust compositions.

Eventually we were able to get all the parts to the stage where we were confident in our results, and we could ask other colleagues to read the working draft and get involved, sharing their insights and suggestions.  That led to a huge number of improvements.  It was in that very late stage that we realized how we could investigate the dust blob, and the potential compact object within, more thoroughly.  It became clear through discussions in the collaboration that one way to explain both the dust blob and the differences in the distribution of certain molecules and transitions could be localized heating from the surface of a hot compact neutron star.  We estimated the heating due to the expected neutron star within, and calculated limits for its luminosity.   This is not the only explanation for the blob, but we think it’s the most likely one that explains the properties we saw with ALMA.

In the end, it's a vastly different paper compared to how we imagined it at the outset.  It's truly been a journey, and we can take satisfaction in the knowledge that we were able to eke out many tidbits that were hiding just under the surface.  But the story is far from finished.  We are eagerly looking forward to the next observations with ALMA, to watch the continuing evolution of the dust in the ejecta, and to refine our understanding of the blob and the surprises it may contain.  This is just the beginning. 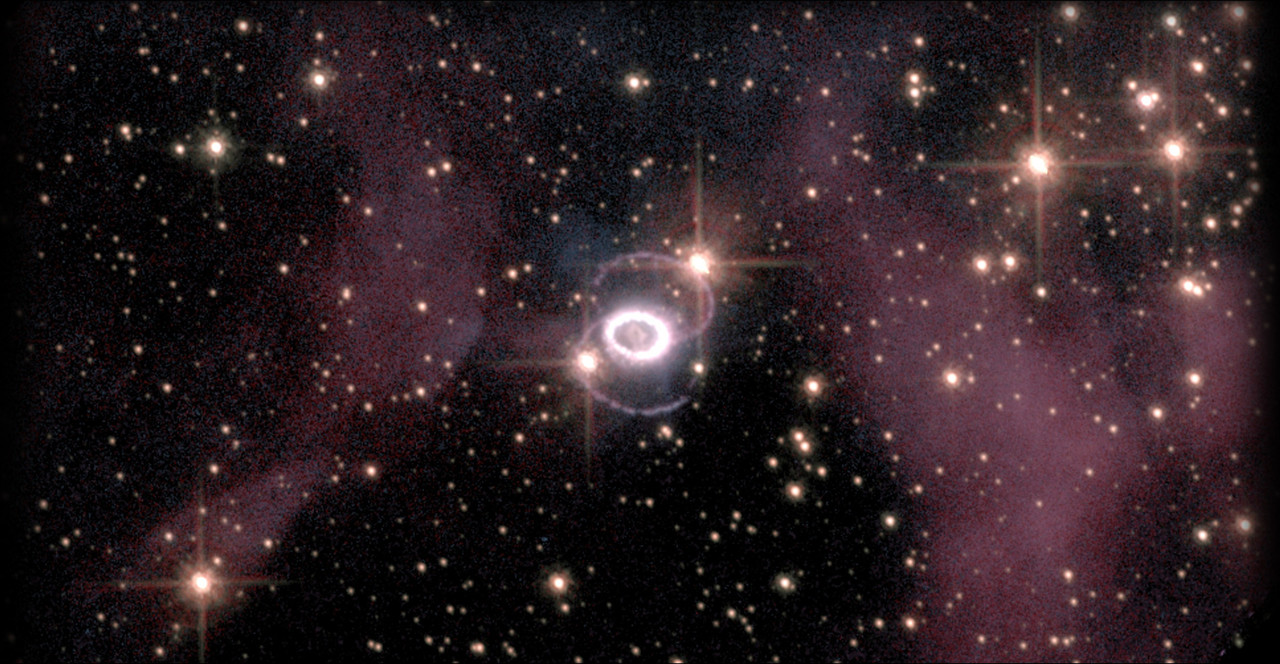 Significant amounts of dust can be produced in the aftermath of a supernova explosion. We made the first images that resolve the dust produced by the explosion from SN 1987A, and found some interesting results along the way.