A gravitational wave experiment as LIGO can be used for dark matter direct detection. We use LIGO O1 data to perform such a search for the first time. We set the best sensitivity for U(1)B dark photon dark matter in a certain mass region.
Fengwei Yang
graduate student, University of Utah
Follow
Like Liked by Ruth Milne and 1 other
0

In cosmology, significant effort is deployed in the search of Dark Matter candidates but no viable solution has yet been found. Using public data from the first run of LIGO, the authors show that they can improve constraints, in a specific mass range, on ultra-light dark matter particle candidates n…

The 2017 Nobel Prize in Physics was awarded for the direct detection of gravitational waves (GW) from binary black hole mergers, underscoring the excitement and vibrancy at the frontiers of physics research. As is well known, gravitational wave detectors probe gravity and astrophysical phenomena. Much less appreciated is their potential to probe - directly - new particle physics beyond the Standard Model.

A wealth of convincing observational evidence confirms the existence of dark matter (DM), which is estimated to compose about 27% of the energy density in our Universe. However, the Standard Model does not have a candidate particle to account for DM. Additionally, all evidence pointing to the existence of DM is related to gravitational effects and associated properties, such as DM mass; their other potential interactions are currently unknown.

In our study, we leveraged the recent advances in GW instrumentation to carry out a novel DM direct detection using the Laser Interferometer Gravitational-Wave Observatory (LIGO). LIGO is a highly advanced Michelson-Morley interferometer (with many extra mirrors and a sophisticated controls system), relying upon precise measurements of a relative change in interferometer arm length. Meanwhile, DM can be formed by an ultra-light ‘dark’ photon, such as the gauge Boson of a U(1)B group. In the ultra-light regime, the dark photon DM (DPDM) can be treated as a classical wave, whose oscillation, like GW, can induce a relative change of the interferometer arm length; thus LIGO can carry out complementary searches for DPDM.

More interestingly, since DM is non-relativistic, the DPDM has a very long coherence length, much longer than the radius of the earth in the frequency regime of interest. This considerable length means that GW detectors at different locations experience very similar dark photon fields. LIGO’s two detectors, one at LIGO Livingston Observatory in Louisiana and the other one at LIGO Hanford Observatory in Washington would experience nearly the same DPDM signal, allowing cross-correlation to be exploited in a search. We use the publicly available data from LIGO's first observing run (O1) to perform the first such DPDM search. We find that, if a dark photon is the gauge boson of U(1)B, LIGO’s O1 data has already provided a sensitivity better than achieved by prior experiments in a certain mass window. Substantially improved search sensitivity is expected during the coming years of continued data taking by LIGO and other GW detectors in a growing global network. 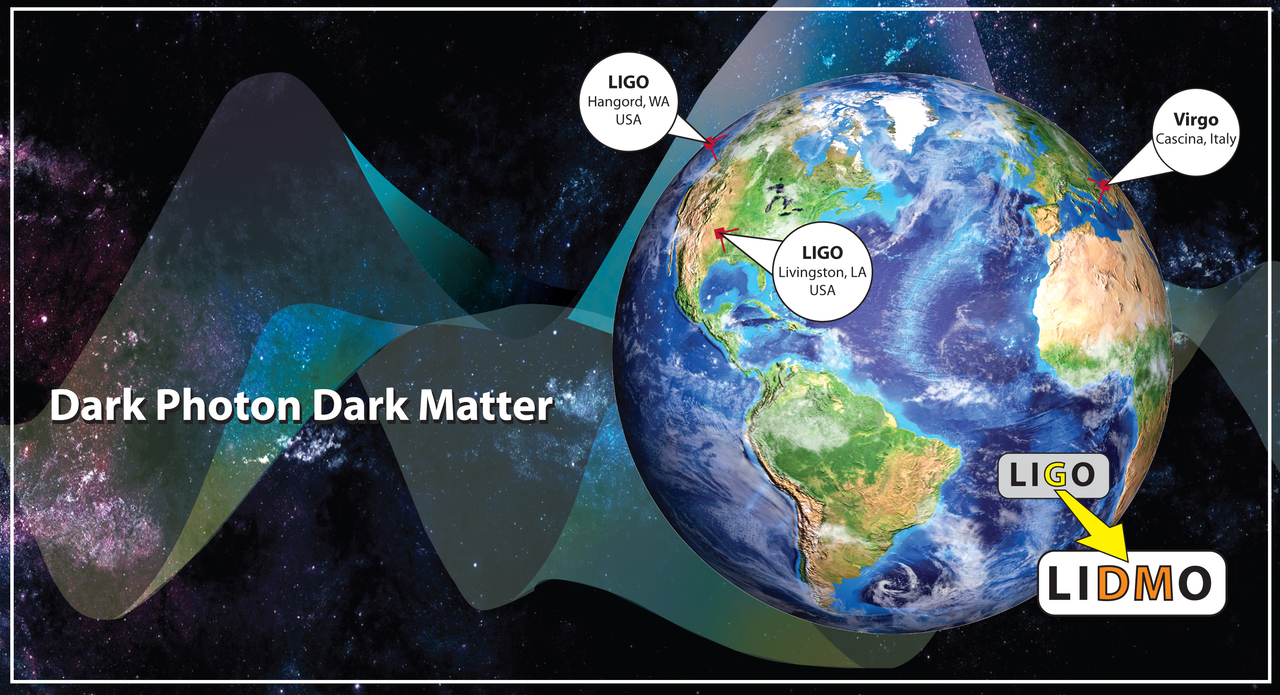 A gravitational wave experiment as LIGO can be used for dark matter direct detection. We use LIGO O1 data to perform such a search for the first time. We set the best sensitivity for U(1)B dark photon dark matter in a certain mass region.