Many stars orbit the supermassive black hole located at the center of our Galaxy. We discovered that some are cloaked in dust and gas. This disguise could result from a system of binary stars that merged under the influence of the black hole.

It’s the beginning of 2017, I had just moved West, from Paris to Los Angeles to start my first postdoc in Andrea Ghez’s Galactic Center Group at UCLA. It’s quite a big change and I am still exploring this new life as I get a message from Mark Morris, telling me that Randy Campbell at Keck Observatory is proposing a collaboration to study the gas dynamics at the Galactic Center. That’s to be done through a new program the observatory has put in place: the Keck Visiting Scholar program, which invites young researchers to spend time at the observatory to do research in collaboration with the local staff. It’s a great opportunity and a perfect match for my research interest and experience. No hesitation, I pack my stuff (the invite said “just bring your laptop and snorkel gear”) and move even more West to spend two months in Hawaii working with Randy. The scholar program proved to be a valuable experience to see closely the telescope and learn firsthand how it is operated. This was just the beginning of a collaboration that is still ongoing!

The Galactic Center Group has been observing the Galactic Center for over 20 years, putting together a treasure of data that served as basis for this work and many others. We looked at 13 years of near-infrared spectro-imaging data-cubes with a visualization tool developed by Randy (OsrsVol). The data-cubes have two spatial dimensions and one wavelength dimension and OsrsVol allows us to display all dimensions at the same time. Looking at the emission features in 3D, over the time span of 13 years is captivating (and slightly addicting, I'll confess) and I spent many hours using this tool to visualize and measure changes in this region near center of the Galaxy. We were looking for the evolution of the gas around the central supermassive black hole (Sgr A*). However, our attention was constantly diverted by four compact objects that seemed to orbit Sgr A*.

What are these blobby objects? We analyzed their emission and measured their orbits. They show up in gas emission (the Brγ recombination line) but remain compact over the 13 years of the observations’ timeline. This behavior very closely resembles two similar objects already known in the region: G1 and G2. Hence, we (creatively) named the new objects G3, G4, G5 and G6. G2, discovered in 2012 and reported in Nature (Gillessen et al. 2012), was originally proposed to be a gas and dust cloud orbiting toward a dramatic encounter with Sgr A*. However, it survived after its closest encounter with the black hole in 2014.

Our four objects and G1 and G2 all share many observational properties. This has led us to see them as members of a common population, therefore looking for a common formation mechanism. In the Galactic Center this is nicely provided by the presence of the black hole itself. Under its influence, systems of binary stars (that form within the stellar population) are often forced to merge and this messy process likely leads to a bloated star surrounded by cold dust, creating a cloak that disguises the new stellar object as a cloud of dust and gas. Working on this has been lots of fun, and the resulting article was published by Nature.

To confirm the fascinating hypothesis on the origin of the G objects, we will keep following them and look for more of them in the Galactic Center and elsewhere. We will find them, even as they hide behind their cloaks of dust and gas. Meanwhile, I am still spinning the data-cubes around, looking for more interesting objects to help us understand this complex region.

Animation of the central stars (old in orange and young in green) and the G objects (in magenta) orbiting the supermassive black hole at the Galactic Center. Credit: Advanced Visualization Lab, National Center for Supercomputing Applications, University of Illinois. If the video does not appear click here. 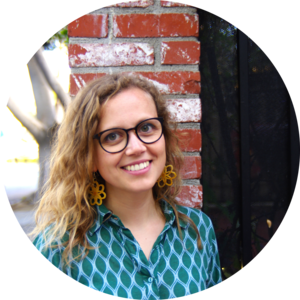