We report the detection of infalling gas originally from cold streams around a Lyman-alpha blob, and further provides evidence the energy source of the extended Lyman-alpha is the central star-forming galaxy.
Yiping Ao
research fellow, Purple Mountain Observatory
Follow
Like Be the first to like this
0

The gas kinematics within a Lyman-α blob show clear evidence of infall, consistent with the release of gravitational accretion energy as cold streams radiate Lyman-α photons. These cold streams are apparently responsible for feeding central galaxies.

Billions of lightyears away, gigantic clouds of hydrogen gas produce a special kind of radiation, a type of ultraviolet light known as Lyman-alpha emissions. The enormous clouds emitting the light are Lyman-alpha blobs (LABs). LABs are several times larger than our Milky Way galaxy, yet were only discovered 20 years ago. An extremely powerful energy source is necessary to produce this radiation—think the energy output equivalent of billions of our sun—but scientists debate what that energy source could be.

A new study that published on March 9 in Nature Astronomy provides evidence that the energy source is at the center of the star-forming galaxy, around which the LAB exists.

The study focuses on Lyman-alpha blob 6 (LAB-6), whose light was emitted 10.7 billion years ago. It is currently located more than 18.5 billion light years away in the direction of constellation Grus, farther than the distance traveled by light because of the expansion of the universe. Our collaborative team discovered a unique feature of LAB-6—its hydrogen gas appeared to fall inwards on itself. LAB-6 is the first LAB with strong evidence of this so-called infalling gas signature. The infalling gas was low in abundance of metallic elements, suggesting that the LAB’s infalling hydrogen gas originated in the intergalactic medium, rather than from the star-forming galaxy itself.

Three-color image of the sky around Lyman-alpha blob 6 (LAB-6). In green is the Lyman-alpha emission from LAB-6. LAB-6 is 18.5 billion light years away from us in the direction of constellation Grus, with an extension about half million light years. The physical size of the yellow box is 3.26 million light years. Most galaxies seen in this image are foreground galaxies. (Blue: VLT/Hawk-I J band at 1.258 micron; Red: VLT/Hawk-I Ks band at 2.146 micron; Green: Lyman-alpha emission at 0.411 micron with Blanco 4m telescope at the Cerro Tololo Inter-American Observatory). Credit: Yiping Ao/VLT/Blanco

We used the Very Large Telescope (VLT) at the European Southern Observatory (ESO) and the Atacama Large Millimeter/Submillimeter Array (ALMA) to obtain the data. The ALMA data can pin down the systemic velocity of the galaxy, and the optical telescope VLT gives us important spectral light profile of Lyman-alpha emission.

LABs are associated with gigantic galaxies that are forming stars at a rate of hundreds to thousands of solar masses per year. Giant halos of Lyman-alpha emissions surround these galaxies, forming the Lyman-alpha gas blobs hundreds of thousands of light years across with power equivalent of about 10 billion suns. The movement within the gas blobs can tell you something about the state of the galaxy.

Infalling gas can originate several different ways. It could be the second stage of a galactic fountain—if massive stars die, they explode and push gas outward, which later falls inwards. Another option is a cold stream—there are filaments of hydrogen floating between celestial objects that can be pulled into the center of a potential well, creating the infalling gas feature.

Our model suggests that the infalling gas in this LAB comes from the latter scenario due to low metallicity inferred from the model fitting. Additionally, our model indicates that the surrounding gas only produces the energy power equivalent of two solar masses per year, much too low for the amount for the observed Lyman-alpha emission. The findings provide strong evidence that the star-forming galaxy is the major contributor of the Lyman-alpha emission, while the infalling gas acts to shape its spectral profile.

This press release is originally on https://attheu.utah.edu/facultystaff/mysterious-ultraviolet-radiation/. 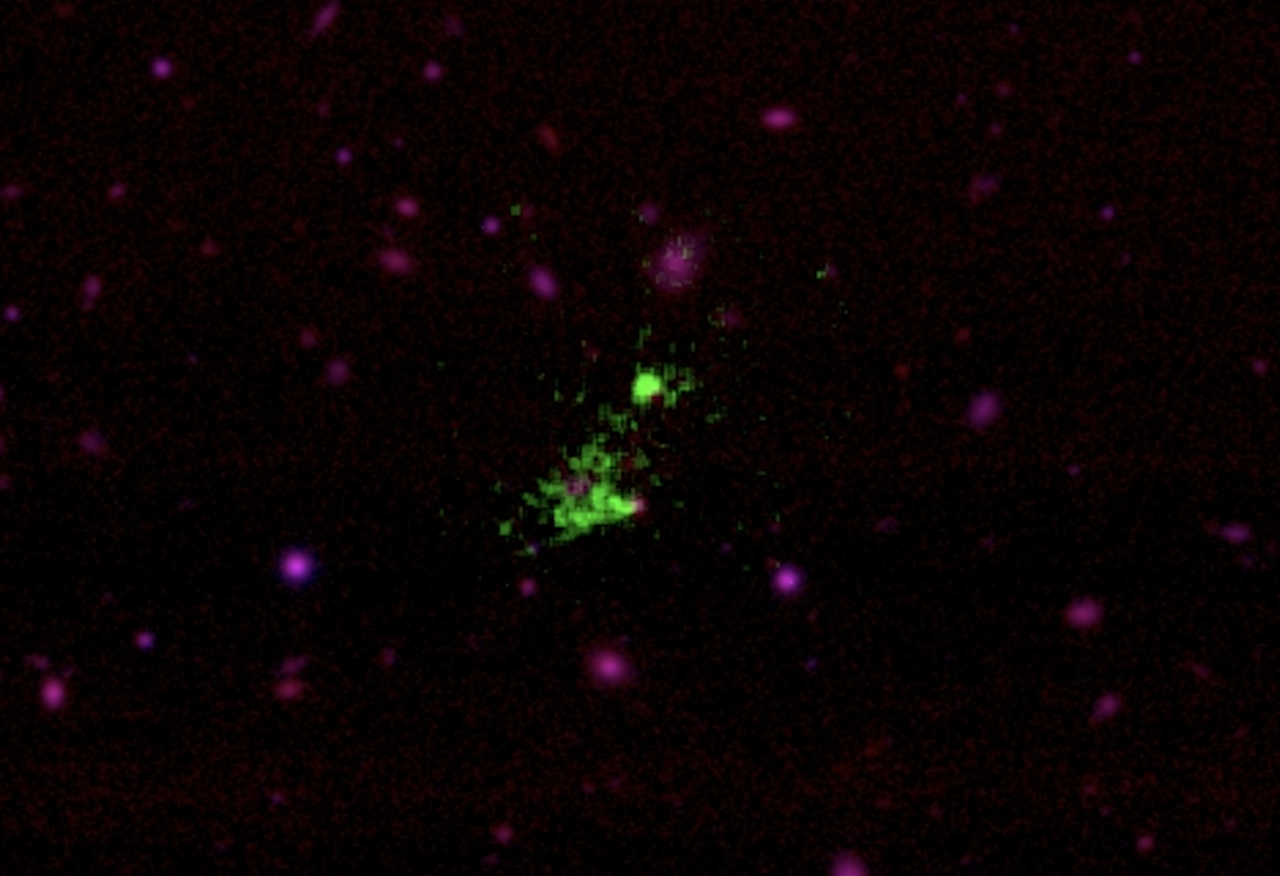 We report the detection of infalling gas originally from cold streams around a Lyman-alpha blob, and further provides evidence the energy source of the extended Lyman-alpha is the central star-forming galaxy.