An anomalous X-ray line observed in extragalactic clusters has been suggested as evidence that dark matter particles can decay. If true, the dark matter in our own Milky Way should also be shining in X-rays, and yet in a detailed search my collaborators and I found only dark skies.
Nicholas Rodd
Miller Fellow, UC Berkeley
Follow
Like Liked by Ruth Milne
0

The dark matter interpretation of the 3.5-keV line is inconsistent with blank-sky observations

What is dark matter? This is a question I'd very much like to know the answer to. There is overwhelming evidence that there is much more mass in the universe than we can see, and although we've given it a name - dark matter - we have almost no idea what it is. The leading explanation is that dark matter is made of a new type of particle we have yet to discover, and beyond the fact it must interact negligibly with light we know very little about it.

To unravel this mystery we often take cues from the particles we do know about. Many particles decay. A neutron in isolation will decay in about 14 minutes into a proton, electron, and neutrino. Even if we couldn't detect the neutron, we could infer many of its properties by observing these decay products. The hope is a similar process may occur for dark matter - if it can decay to a particle we can see then we could similarly unravel its properties.

To be specific, if dark matter is made up of heavy neutrinos, then it could decay into a regular neutrino and a photon. In these models the heavy neutrino (usually called a sterile neutrino) can be detected by the photon these decays emit, which is expected to be at X-ray energies. So at least in this model we have clear strategy for unraveling the dark matter mystery: search for anomalous X-ray lines.

Interest in the idea that sterile neutrinos could be dark matter exploded in 2014 when two groups (Bulbul et al and Boyarsky et al) claimed the discovery of exactly such an anomalous X-ray line at 3.5 keV. The discoveries were made in galaxies outside our own Milky Way, and primarily galaxy clusters which are collections of galaxies. These monstrous objects contain enormous reservoirs of dark matter, and if that is made of particles that can decay the clusters should produce a bright X-ray line. A cartoon picture of what might have been going on is depicted below.

The signal had many of the properties expected of dark matter, and was observed in the XMM-Newton and Chandra satellites, both which had been operating for almost 15 years at that point. Yet several places one might expect the line should show up based on the expected dark matter distribution, it hadn't. The hope was that the up-coming Hitomi satellite, which had a significantly better energy resolution, would be able to definitely determine the origin of the line and resolve the debate. Tragically, Hitomi was lost shortly after launch. The expectation in the field became that it might take a new satellite to resolve the origin of the 3.5 keV line, and potentially dark matter itself.

Meanwhile, in 2016 Ben Safdi and I, both then at MIT, had been working on the best ways to constrain decaying dark matter for particles that produce a signature in gamma-rays. In particular, we were motivated in the possibility that IceCube may be seeing a hint of dark matter decaying to neutrinos. But due to electroweak corrections, if a heavy dark matter particle was decaying to give neutrinos, it must produce gamma-rays also, and so we used data from the Fermi Gamma-ray space telescope to set strong constraints on that possibility.

In that paper, which appeared in PRL, we realized that decays from the Milky Way halo provided a very bright contribution to the flux from decaying dark matter. A year or so after that work, Ben, who was now a junior faculty member, was entering the world of grant applications. For one of these, Ben and myself joined with Chris Dessert and at the time Siddharth Mishra-Sharma to think of ideas extending the search for decaying dark matter. In that grant we suggested that we could use the same ideas we'd exploited in gamma-rays to search for dark matter decay into X-rays, with a particular focus on the broad Milky Way halo which hadn't been systematically attacked previously (recall the line was discovered outside our galaxy). We submitted the grant, suggesting we could use these ideas to potentially say something interesting about 3.5 keV line. The grant was rejected. Nevertheless, Ben, Chris, and I decided to push forward.

What we ultimately found is that we could make an extremely strong statement about the 3.5 keV line, and the resulting work appeared recently in Science. Essentially we were able to exploit the almost 20 years of data that XMM-Newton had collected and the fact that almost every observation looked through the Milky Way halo. A simple signal to background estimate revealed that the combination of the brightness of the Milky Way halo and the huge dataset XMM-Newton had stored to disk implied that if the line was real it should jump out at an enormous significance in our dataset. What we saw when we did the analysis is shown below in the figure taken from our paper.

Unfortunately, the data we saw did not appear to be consistent with the 3.5 keV line expectation, which is shown as the dashed red curve (the two panels correspond to the two types of X-ray cameras aboard XMM-Newton). The result was, to be perfectly honest, a bit disappointing! The hope going in is that we may conclusively confirm that the 3.5 keV line comes from dark matter, and finally be able to answer one of the biggest questions in physics. Yet as our analysis was significantly more sensitive than ones that had appeared previously, we were able to set a very strong constraint on the possibility that the line observed in clusters was indeed from dark matter. In this sense, while we weren't able to unravel the mystery of dark matter, we were able to resolve one of the outstanding anomalies in the field.

Most excitingly, our results demonstrate that the method of searching for dark matter X-ray lines in the Milky Way is significantly more sensitive than other techniques being used. In the work discussed here, we focused our attention on a narrow window around the 3.5 keV line. But maybe dark matter is a sterile neutrino producing an X-ray line at another energy we haven't looked for yet. If so, we might be writing the dark matter discovery paper soon! 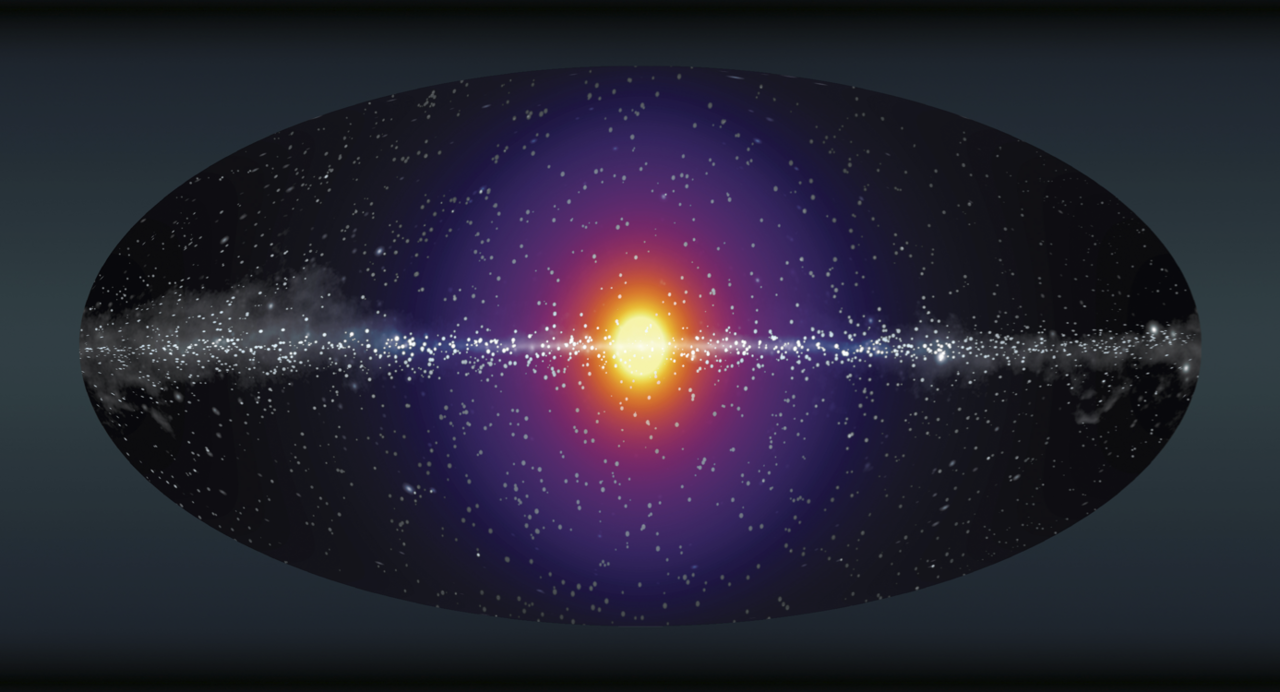 An anomalous X-ray line observed in extragalactic clusters has been suggested as evidence that dark matter particles can decay. If true, the dark matter in our own Milky Way should also be shining in X-rays, and yet in a detailed search my collaborators and I found only dark skies.