Collisional ring galaxies are extremely rare in the nearby Universe. Would they be more popular in the past when galactic collisions were more common? The discovery of a high-redshift ring galaxy shows that the young Universe didn't make it easier for creating collisional rings.

"If you like it, then you shoulda put a ring on it, Whoa, oh, oh, oh...” Those were the exact lyrics sung by co-author Prof Glenn Kacprzak, when I showed him a giant galaxy with a ring on it. Glenn’s office is opposite to mine, and I go to him for brainstorms. Budding ideas are safe with Glenn; he might even dance when excited. Thanks to Glenn, my brain is now permanently linking Beyoncé with a ring galaxy.

I noticed this ring galaxy (called R5519) when inspecting a sample of high-redshift (z>2) galaxies for spiral arms. My inspection was biased towards big objects. R5519 was one of the largest galaxies at z>2 in the COSMOS field of the ZFOURGE survey. I published a paper in 2017 reporting a rare ancient spiral galaxy with a thin disk. Since then, I started a project of finding more high-z spirals to test theories of spiral arm formation. I speculated that the rarity of high-z spirals was partly owing to the lack of high-angular momentum thin disks. Spiral arms in nearby galaxies reside in stellar disks that are crazily thin. Scaling down, the thin disk would be as flat as a CD. Forming a large thin stellar disk from a cloud of primordial gas 2-3 billion years after the Big Bang is hard. Harder than hand-compressing a balloon into the shape of a razor without catastrophe.

I found myself enchanted by R5519. When co-author Prof Kim-Vy Tran, who was leading the MOSEL survey, provided extra slits on the MOSFIRE/Keck masks for my spiral targets, I accidentally (ahem!) gave R5519 a high priority number. I also got some OSIRIS/Keck time to observe the full sample of spiral galaxies. Un/luckily, the clear sky lasted for only 2 hours, which was awkward for a full sample, but good for a lone-wolf. Observing R5519 with adaptive optics (AO) on OSIRIS was challenging as its laser guide star approached the limit of Keck. We (Prof Deanne Fisher and Dr Sarah Sweet) had a thrilling time watching the laser loop close for R5519. A salute to the staff at Keck!

R5519 piqued my curiosity for its familiarity and strangeness (Fig. 1). Familiar because “ringed” galaxies are not uncommon. About half of the spiral disks in the nearby Universe have rings or partial rings. These rings are thought to form internally from orbital resonances related to bars, ovals and spiral arms. I had many discussions with co-authors Prof Ivo Labbe and Prof Ken Freeman, whose combined expertise covers high-z and nearby disk galaxies. We realised that if R5519 were a ringed galaxy, then it would suggest that it was a barred spiral galaxy as massive and big as today’s Milky Way, and with a huge bar too! Theorists would be upset: that’s too massive (stellar mass), too big (size of the disk and the bar), and too mature (flat disk, bars and spirals) to be all true at z~2.2.

No need to (severely) challenge galaxy formation models if R5519 was a collisional ring galaxy (CRG) -- a much rarer type of rings. Like throwing a pebble into a pond, CRGs are formed in a drop-through collision with another galaxy; the rings represent density waves moving radially. Unlike the controversy on the density-wave nature of spiral arms, there is a consensus that CRGs are products of density waves in the nearby galaxy community. However, there is a lack of detailed observations on CRGs at z>0.1, which seems odd given that previous studies predicted more CRGs at high-z.

I met co-author Dr Ahmed Elagali at a writing retreat. Ahmed told me that he was working on ring galaxies in EAGLE simulations with Dr Claudia Lagos. I was amazed that my observation matched their predicted number density of CRGs at z=2 (Fig. 2). We found that CRGs had always been rare, despite a higher collisional rate in the past. We suspected that the lack of large thin disks and local-like galaxy groups could have reduced the observable CRG fraction in the young Universe. R5519 is linked to my project of spiral galaxies after all.

R5519 looks different from its local counterparts (Fig. 1). For example, the extended light outside of R5519’s ring is much brighter and larger than nearby CRGs. In our first version of the paper, we explained the extended light as a result of a collapsing ring, which was vetoed by referees. We adopted our referees’ suggestion of explaining R5519 in the context of established models such as a secondary or satellite-disturbed ring (details in the paper). New computer simulations and better observational data are required to fully assess the origin of R5519. We welcome follow-up work on R5519.

The journey towards publishing R5519 was full of ups and downs. For those who are on the road, I'd like to share a fun fact and a quote. Fact: The odds of finding a galaxy like R5519 are a thousand times smaller than getting a major research grant. Quote: “Don’t let anyone keep you down for silly reasons such as who you are. And don’t worry about prizes and fame. The real prize is finding something new out there” – Vera Rubin. 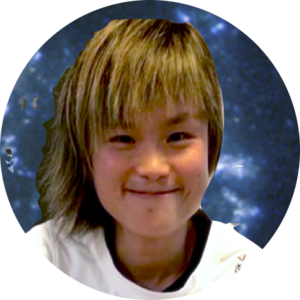