The first James Webb Space Telescope image of a planetary nebula had a large fraction of the community studying these objects very excited. With astounding image precision and longer wavelengths new information comes pouring in, enough to keep 69 astronomers busy for months.
Orsola De Marco
Professor, Macquarie University
Follow
Like Liked by Paul Woods and 1 other
0

JWST observations of the planetary nebula NGC 3132 reveal a rich molecular environment containing evidence of multiple stellar interactions on a variety of scales.

I was in beautiful Byron Bay, Australia, when the first JWST images were released. I was sitting in the car hoping that my cell phone coverage would cater for the needed video bandwidth, when POTUS appeared on the screen and said a few appreciative words about JWST. But it wasn't till late in my evening that the image I was waiting for was finally unveiled: that of the planetary nebula NGC3132, also know as the Souther Ring nebula.

Looking at the stunning image right there on my computer screen, I would not have expected to notice something really peculiar; and I am not referring to the stunning wealth of detail in the extended halo of the nebula. I am referring instead to the fact that two stars were sitting in the middle.

Now, the fact that the middle of the planetary nebula NGC3132 houses a visual binary was known since the days of the Hubble Space Telescope - HST, when the faint star that ejected the nebula, a hot, tiny white dwarf, was detected close to its much brighter, main sequence companion, thanks to HST's resolving power. In the mid-infrared, JWST image, however, the two stars were almost as bright as one another and that, made no sense.

In fact, it made no sense to a number of people, all watching the image release at the same time: super-hot white dwarfs do not shine brightly in the mid infrared! And so e-mails started darting across oceans and continents. As president of the International Astronomical Union's Commission H3 (dedicated to planetary nebulae like NGC3132), I thought we should say something ... officially. Then Albert Zijlstra of Manchester University, suggested a "small" community paper. The beginning of the end.

From there the frenzy started. The group grew rapidly as more people joined with diverse expertise. Wolfgang Steffen and his company Ilumbra started to generate a 3D model of the frame of the nebula, combining JWST images with ground-based data from the European Southern Observatory. This model was accompanied by new photo-ionisation models by Hektor Monteiro (Itajuba University, Brazil) and Christophe Morisset (UNAM, Mexico) to study the nebular gas and determine what it can tell us about the illuminating star.

At the same time a number of researchers concentrated on the two central stars to determine their mass and it turned out that with the new distance to the bright companion from the Gaia telescope, we can get an excellent measurement of its mass and, by association, of the mass of the central star of the nebula at the time when it was born. But are the two stars associated for sure or could the companion be more distant or closer? Well, there are a lot of lines of evidence that convinced us that the two stars are indeed an orbiting pair, but my favourite is something pointed out by Ivo Seitenzahl (UNSW, Australia), that you can see the spectrum of the companion reflected in some dusty filaments residing inside the nebula, so the companion must be inside the nebula too!

And then we noticed the broken concentric arches engraved in the extended halo and engaged Shazrene Mohamed (University of Cape Town, South Africa) who has been modelling rings in nebulae for a long time. No successful explanation of the rings has ever been given other than orbiting companions. Our rings are more like broken arches likely because the orbital track was inscribed onto the gas quite a while ago and the rings have suffered a lot of "weathering". Yet they can still be measured to give away the location of an unseen, low mass companion.

But let's return to the infrared light from the hot companion that peaked our interest in the first place. Now, this is not the first time that a white dwarf shows IR light excess. In some old white dwarfs the infrared excess is from a transient disk coming from disrupted asteroids. This is not the case here - I have myself worked in the past on the difference between those debris disks and the ones sometime found around post-AGB stars and central stars of planetary nebulae like this one. The latter are heavier. Their mass and angular momentum content convincingly argue for a past binary interaction and the presence (at least in the past) of a closer companion, closer than the one that inscribed the arches. The disk has however many more mysteries to reveal.

And then there are the bumps and protuberances of the ionised central bubble, most likely formed by jets from the central stellar system. These can be seen to pair off reasonably accurately in our morpho-kinematic model. The close companion that generated the dusty disk could be the origin of jets, but if the protuberances do come in pairs, then jets axes were toppling, hard to explain with a simple binary interaction. Such configuration of jets would be much easier to explain with a close, triple star interaction.

The paper came together fast, with most of the work done in about 4 weeks after the release. Over the weeks more people joined and we generated a very healthy Slack conversation. In the first period of intense work we had telecons every 2-3 days in various configurations and many, many more telecons where myself and Joel Kastner of the Rochester Institute of Technology, NY, USA, shortened the paper to fit the Nature Astronomy template, in the conviction that this nebula and what JWST can do to understand planetary nebulae in general, deserves the spotlight.

As scientists we are always critical of our own discoveries. With 69 authors come .... 148 opinions, 296 disagreements, 592 caveats, and more than a few upsets. No assertion, no measurement, is 100% certain and we all struggled with the reduced word and figure count of Nature Astronomy. This said, the exercise to compress and distil, congealed the relationship with the result, and made us unreservedly agree that JWST will bring about a step change in this field of Astronomy, akin to what HST brought 30 years ago. It also reiterated how planetary nebulae are true gateway objects to study chemistry, interstellar medium return, galactic evolution, transients, stellar evolution and more and how JWST data will challenge many of our models, even those we hold as "pretty good". I for one am looking forward to observing where this field will go next. 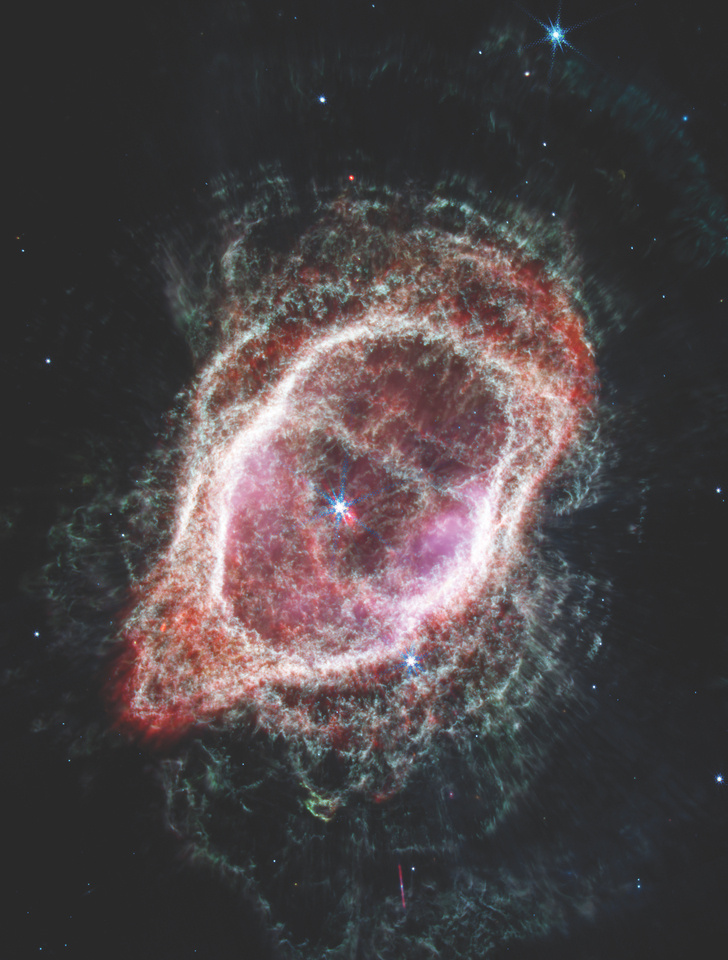 The first James Webb Space Telescope image of a planetary nebula had a large fraction of the community studying these objects very excited. With astounding image precision and longer wavelengths new information comes pouring in, enough to keep 69 astronomers busy for months.