Deep spectroscopy with Keck determined a redshift 10.957 for the galaxy “GN-z11”, supporting it as the most distant astrophysical object known to date. Meanwhile, a bright burst was serendipitously caught from GN-z11, which can be explained as an ultraviolet flash associated with a gamma-ray burst.

One of the main scientific goals of the next generation telescopes is to understand cosmic reionization and detect light from the first objects. For current astronomical facilities, it is very difficult to detect optical/infrared spectra from such distant objects. The galaxy that we observed is so-called “GN-z11”, which is quite famous in the high-redshift community. Based on existing data from HST, GN-z11 is at a redshift around 11, or at least greater than 10. However, its accurate redshift has remained unknown. Our purpose was to detect possible emission lines such as the [C III] 1907, C III] 1909 doublet and He II 1640 in the K band, if the galaxy is indeed at redshift ~11. At such a high redshift, we do not expect to see its Ly𝛼 emission, because the IGM is neutral and would have absorbed (scattered) nearly all Ly𝛼 emission. Another potentially strong line, the C IV 1550 doublet, would be located in a water vapor absorption band in the near-IR, and thus is not reachable from the ground.

In 2017, we obtained deep near-IR spectra (mostly in the K band) using MOSFIRE on the Keck I telescope. The observing condition was perfect. The data went so deep that we can even detect the continuum emission from GN-z11 (~26 AB mag) by stacking its 2D combined spectrum along the wavelength direction. Immediately after the Keck data were taken, one of our collaborators did a quick reduction and told me that we had probably detected C III] and He II. Soon later, two of our team members reduced the data independently. We concluded that we detected the C III] doublet and O III] 1666, with relatively low S/N ratios. They correspond to a redshift 10.957. We ruled out lower redshift contaminating sources as being the source of the lines. He II could also be there, but it is severely contaminated by OH skylines, so we did not claim a detection for He II. In the following two years, we tried our best to get more data (to improve the S/N), but failed. In 2018, we were awarded two more Keck nights, but the weather was poor. Later, one of our collaborators agreed to observe it, but again it was weathered out.

During our observations in 2017, we serendipitously caught a bright burst from GN-z11. This burst showed up as a compact continuum spectrum with a duration shorter than 3 minutes, in only one of the 106 K-band images. The spectrum exhibits prominent telluric absorption features, indicating that it arose from above the atmosphere. We did not realize it until we saw a continuum in the expected position of GN-z11 in the combined 2D spectrum. This transient puzzled us and is still puzzling us. It must be an extremely low-probability event. Our team members have collected a large amount of multi-slit spectroscopic data in the past ~20 years from a variety of telescopes, and we have never seen this type of transients in previous data. Indeed, it is so rare that nobody with whom we have shared this observation has ever encountered this kind of events before. We performed a comprehensive analysis of the origin of the burst, and ruled out (to the best of our knowledge) the possibility that it was from known sources such as man-made satellites or moving objects in the Solar system. Finally, we found that the transient was likely produced by a gamma-ray burst in GN-z11 (despite that the probability is very low), as the spectrum, brightness, and duration of the burst are consistent with such an interpretation.

Links to the two papers: 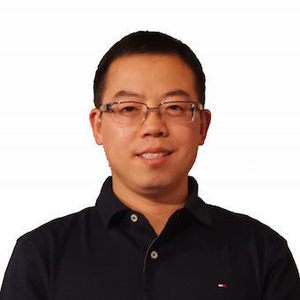