Modern advances in quantum sensing allow us to search for ultralight dark matter over a wide range of model parameters, and a strong case can be made that the best place to look is not near the Earth, but near the Sun.
Joshua Eby
Postdoctoral Scholar, Kavli IPMU, University of Tokyo
Follow
Like Liked by Evelina Satkevic
0

Quantum sensors, such as atomic clocks, placed deep into the inner Solar system, may be sufficiently sensitive to directly detect ultralight dark matter bound by the mass of the Sun.

One of the greatest mysteries in modern physics is the identity of dark matter. Although it constitutes 10× more mass than all luminous matter (stars and gas) in our galaxy, it has so far evaded detection, at least partly because it interacts so weakly. Experimental searches have been rapidly advancing in sensitivity over the last several decades, but as of today, no conclusive signal has been seen of a dark matter particle interacting inside a detector.

Due to the lack of direct experimental verification, many models of dark matter are still viable today. An idea that is rapidly gaining momentum is known as ultralight dark matter (ULDM), named for the very small masses of the constituent particles; ULDM typically has masses smaller than any known massive particle, including massive neutrinos. Because of these very small masses, ULDM behaves less like a collection of particles and more like expansive waves, whose wavelength can be even larger than planets or stars. The oscillation of these waves have unique observable consequences! For example, quantum sensors (for example, atomic or nuclear clocks) measure the emission energy of quantum systems (for example, atoms or nuclei), and the oscillation of ULDM can cause this energy to fluctuate. Therefore, the best atomic clocks in the world, and near-future quantum sensors built from other physical systems, have an impressive ability to discover dark matter, if dark matter indeed is ultralight.

A key input for all such searches is the so-called local dark matter density, which is a measure of the number of dark matter particles in a given volume of space. Under the typical assumption of a spherical halo, the mass density is expected to be roughly 10−21 kg/m3 in the vicinity of the Earth; for comparison, this corresponds to roughly one proton mass per cubic centimeter of space, which is not much! Given that all direct searches for dark matter are currently on Earth, though, one might think we just need to accept this difficulty and continue to build even more sensitive experiments.

However, this may not be the whole story. ULDM has a unique ability to be captured around astrophysical objects like the Sun, which I’ve written about it previously (you can have a look at that post here). If a solar halo of ULDM exists around our own Sun, it may imply a much larger density than usually assumed. And this modification of the local dark matter density may be even more extreme if the solar halo has a small radius, smaller than 1 astronomical unit (the radius of Earth’s orbit) or even 0.4 au (the radius of Mercury’s orbit). If the radius is below that range, we would have no way to see the effect of ULDM directly on the motion of planets. The only way to discover such small, dense solar halos may be to send our detector to the inner reaches of the solar system.

And that is the idea behind our proposal, tentatively dubbed SpaceQ, which was recently published in Nature Astronomy. The idea is to leverage the rapidly-advancing sensitivity of quantum sensor searches for ULDM, along with the possibility of a large-density, small-radius solar halo, by utilizing a cutting-edge quantum sensor poised on a space mission sent to within the orbit of Mercury. The sensitivity of such a search would be quite impressive. For optimal ULDM parameters, a SpaceQ-like mission could improve existing constraints on ULDM by more than 10 orders of magnitude–-or, even better, the mission could discover ULDM if it truly is there to be found. As we describe in our paper, such a mission could do more than search for ULDM; it could also significantly improve other measurements, including the limit on spatial variation of fundamental constants.

Can our proposal be realized, or is it just a theorist’s dream? We believe it to be feasible in the near future, and there are actually several existing space missions that provide good evidence for this. The first is the Parker Space Probe, a NASA mission which has been operating since 2018 on a trajectory which approaches the Sun below 0.1 au, protected by a powerful heat shield. At the same time, there is an impressive worldwide effort to put lightweight quantum sensors in space, including the Deep Space Atomic Clock (DSAC), another NASA mission, which has demonstrated world-leading atomic clock sensitivity in space. Put these ideas together, and we’re on our way to realizing SpaceQ, and the possibility of a ULDM discovery.

There are certainly technical challenges to this idea, including: the optimization of lightweight quantum sensors to autonomous operation in space; the design of the space mission and shielding to protect sensitive equipment from temperature or magnetic field fluctuations; among others. But there seem to be no in-principle barriers to actualizing this proposal, and as DSAC and the Parker Space Probe indicate, technology is already advancing along these lines. Perhaps someday, similar ideas can be used to map the dark matter density throughout the solar system, or even beyond. But we need to measure the dark matter first. 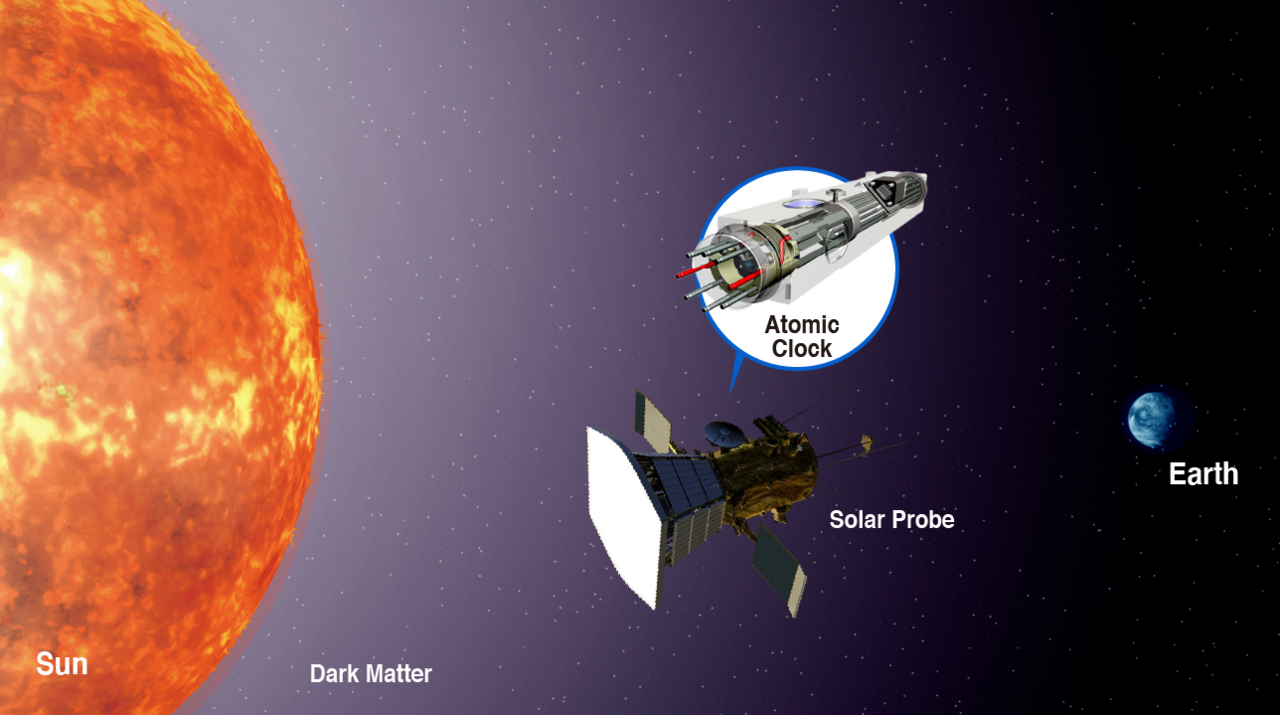 Modern advances in quantum sensing allow us to search for ultralight dark matter over a wide range of model parameters, and a strong case can be made that the best place to look is not near the Earth, but near the Sun.