By modelling the radio, optical, UV and X-ray data of the unusually bright cosmological explosion AT 2022cmc, Pasham et al. argue for the presence of a highly collimated jet moving at ≳99.99% the speed of light.

Some types of astronomical events sound like they come straight out of a sci-fi book, and Tidal Disruption Events (TDEs) are definitely one of those. In a TDE, a star ends up coming too close to a supermassive black hole, which are black holes with masses of millions to billions of times that of the Sun. When that happens, the face of the star close to the black hole is subjected to a stronger gravitational pull than the far side, and like the oceans on Earth, this difference in gravitational forces ``stretches" the star. On Earth the result is just the level of the sea increasing or decreasing by a few meters. However, during a TDE, these tidal forces are so strong that the entire star is stretched and eventually torn apart. Roughly half its mass is "eaten" by the black hole in a process called accretion, while the other half is ejected away from the system. As the stellar debris falls towards the black hole, it is heated up to millions of degrees, resulting in the system shining at extreme luminosities - even more than stellar explosions like supernovae. Accretion (both caused by TDEs, and other phenomena) is one of the main phenomena that regulate the growth of black holes, so we need to understand its properties to understand how and why these cosmic monsters exist in the first place.

TDEs are unique kinds of accreting systems for two reasons. First, they evolve on human timescales: we get to see the accretion flow form and then "shut down" over a few months, while that same process in a "normal" accreting supermassive black hole would take hundreds of thousands of years. Second, in their early stage they occur in a regime called "super-Eddington": the rate at which the black hole is swallowing matter is higher than what simple theory says is possible (which we call the Eddington limit). This is the same regime in which black holes likely grew in the early Universe, so we can directly study how these black holes grew from weighing about the mass of a large star, to millions or billions times that.

I actually ended up working on TDEs by coincidence. I met Dheeraj Pasham (DJ) during lunch a few months after I began working at MIT, and at the time I wasn't familiar with most of the staff. We did a quick round of introductions and right after I mentioned what my work and expertise are, DJ's eyes lit up and he said "I have some really cool data for you to look at!". That awesome data turned out to be his (and his colleagues') observations of a one-of-a-kind TDE, with the very charming name of AT2022cmc - you can find two awesome videos in English and Spanish that sum up what we think happened in this object. AT2022cmc is unique type of transient called a relativistic TDE: rather than fall on the black hole, some of the material in the disk is ejected away at some 99% of the speed of light in a collimated stream of plasma (called a jet), which just so happens to be pointed straight towards Earth. When this happens, the intrinsic luminosity of the jet is greatly increased due to the Doppler effect (similarly to how we hear a siren having a higher frequency as it moves towards us). This is only the fourth event of this type discovered, versus dozens of "regular", non-relativistic TDEs. Launching these jets is quite common for accreting black holes, and as a rule of thumb it becomes more likely when less matter is being accreted. This makes super-Eddington, relativistic events (like AT2022cmc) particularly interesting, because it is unclear why they are ejecting these outflows in the first place. On top of that, AT2022cmc is the farthest of its class ever discovered (it happened more than halfway across the Universe!), and unlike previous relativistic TDEs it was discovered by brand new, automated sky surveys that are anticipated to detect many similar events in the future.

Where my work came in is in helping interpret the data. My expertise is in coming up with models to explain the emission we observe from black hole jets, which typically covers the full electromagnetic spectrum, from radio waves, to infrared and visible light, to X-rays and gamma-rays. I have worked on all sorts of types of accreting black holes, but I had never had the chance to work on TDEs, so this was a really exciting opportunity. When I got some preliminary data from DJ I hacked together a simple code to calculate the emission we would expect from a typical black hole jet, and after a few minutes I knew this source was unique even by the lofty standards of relativistic TDEs.

What makes this event really stand out even among relativistic TDEs are the properties of its X-ray emission: it is both highly luminous (meaning some very energetic phenomenon is driving the emission), and highly variable (meaning the emitting region is likely quite small).  I quickly found that explaining this rapid variability is almost impossible for the "standard" model I used. The large X-ray luminosity was achievable in principle, but at the expense of requiring a plasma with a very weak magnetic field in the emitting region of the jet. This is uncomfortable because we believe that magnetic fields must play a very important role in launching and stabilizing jets, and to play that role they have to be quite strong. Essentially, while we have some idea of what this particular jet might be doing, it is very hard to explain all of its properties.

It gets even more interesting: let's say AT2022cmc is not some strange, one-off event (and we have no reason to think it would be) and we just got extremely lucky with catching it. Then, there should be a lot of similar relativistic TDEs, except their jets would be pointed in random directions away from Earth. In fact, a simple calculation showed us that "a lot" in this case means roughly 20000 events - so why are we not detecting them? It could be that our models are wrong, or our strategy for observing these transients are wrong, but either way we have opened a lot of interesting  questions that will need to be answered in the years to come.

Between how complicated the physics of AT2022cmc appear to be, and the promise of detecting many similar sources in the near and intermediate future, it is a really exciting time for studying TDEs and their accretion flows. It will be really interesting to see what models people come up with to explain all the amazing and strange data we have on this source, whether jets in relativistic TDEs just behave differently from "regular" black hole jets, and most importantly, to pick one more piece of the puzzle that is black hole growth! 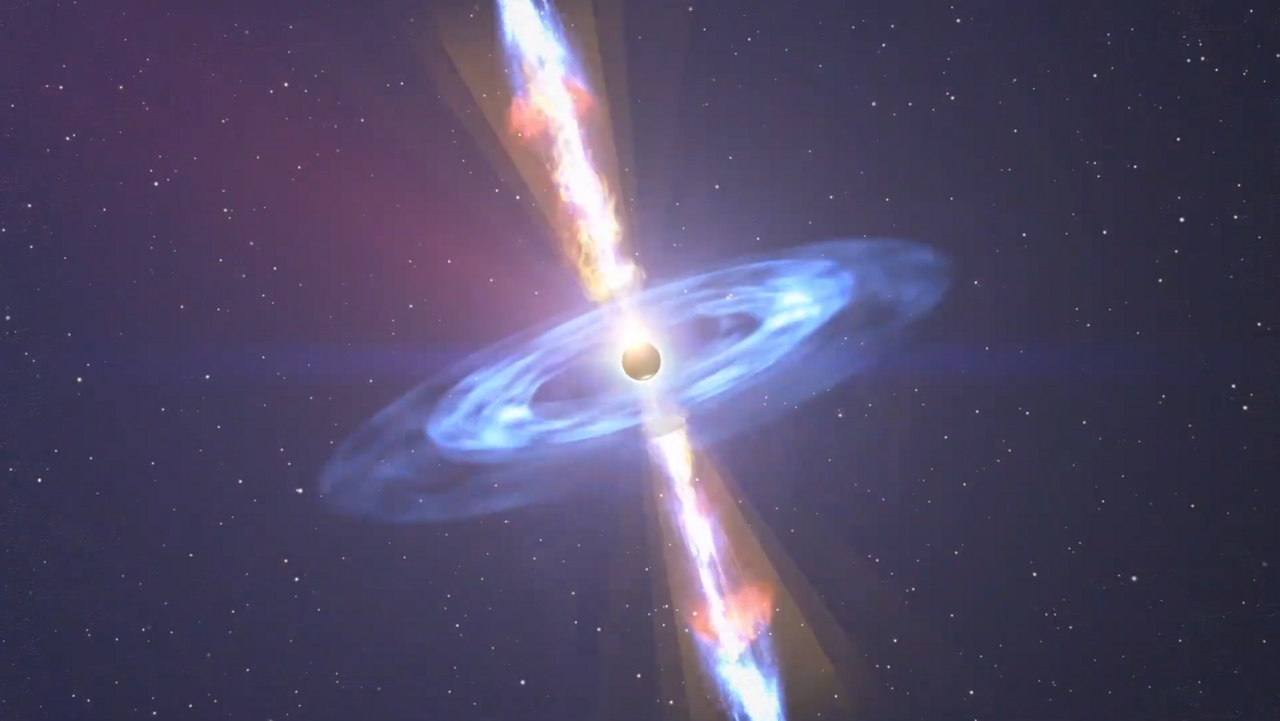