This is a "Behind-the-paper" post on Troja, Fryer, O'Connor et al. 2022 (https://www.nature.com/articles/s41586-022-05327-3): "A long gamma-ray burst from a merger of compact objects" which presents the discovery of a kilonova associated to the long gamma-ray burst GRB 211211A.
Brendan O'Connor
PhD Student, The George Washington University, University of Maryland College Park
Follow
Like Liked by Evelina Satkevic and 2 others
0

Nature - A bright, long-duration gamma-ray burst observed by the Swift observatory has hybrid high-energy properties, suggesting that its origin is the merger of a compact binary.

Gamma-ray bursts are cataclysmic explosions that can be associated with different types of progenitors. They are commonly separated into either the classes of short duration, less than 2 seconds, or long duration, greater than 2 seconds, bursts. Short duration events are associated with the merger of compact objects,  which are generally composed of at least one neutron star (NS), whereas long bursts are created by the collapse of rapidly-rotating, massive stars. The classification scheme has stood the test of time, and was spectacularly confirmed by the direct detection of gravitational waves (GWs) from a NS merger which produced a burst of short duration (GW170817/GRB 170817A).

GRB 211211A triggered space-based gamma-ray instruments on December 11, 2021 at 13:09:59 UT with an almost unprecedented brightness, being the second brightest GRB ever discovered by the Neil Gehrels Swift Observatory. The afterglow was rapidly uncovered within 80 s of the gamma-ray trigger. Our international team of astronomers from 7 different countries quickly began observing with telescopes from around the world, acquiring the most complete ultraviolet and optical dataset of this source.

While the transient initially appeared similar to a long duration gamma-ray burst,  early evidence that GRB 211211A was a peculiar event lay within its environment. GRB 211211A was localized  at a significant offset of ~8 kpc from the center of a bright galaxy at a distance of only 350 Mpc from Earth. As my PhD thesis focused on characterizing the environments of gamma-ray bursts, I immediately knew that this large distance between the GRB position and the galaxy’s center was an outlier for long gamma-ray bursts (massive star progenitors), but typical for neutron star mergers.

Therefore, I utilized the 8.1m Gemini North telescope and Hubble Space Telescope (HST) to study  in depth the GRB environment: Gemini excluded star formation at the explosion site, while HST showed that there was no other galaxy that could possibly harbor this GRB. These observations ruled out a typical long GRB environment, and excluded the presence of a bright supernova, which would have been the conclusive signature of a massive star progenitor.

During my graduate studies, I showed that the brightness of the GRB X-ray afterglow tends to correlate with its environment. By utilizing the ratio of X-ray flux to gamma-ray fluence, which depends on the density of the GRB environment, I was able to show that the X-ray emission from GRB211211A was unusually faint. The faint afterglow pointed towards a very low density environment, consistent with the large offset from the nearby galaxy.

Due to our substantial multi-wavelength  dataset, we were able to uncover the signature of a thermal blackbody component in the spectral energy distribution (SED) as early as 5 hours after the burst. The thermal component evolved from blue to red wavelengths, following our expectations for kilonovae powered by the radioactive decay of heavy elements. This represents the earliest discovery of kilonova emission to date, and the second closest kilonova ever detected. All of the evidence, from the kilonova lightcurve and SED to the host galaxy, pointed toward a nearby long duration gamma-ray burst created by the merger of two compact objects.

GRB 211211A disrupts the 30 year old class structure of GRBs by showing that a long duration GRB can be associated with a compact merger. This unusual event produced more questions than answers, with the foremost uncertainty being how a compact binary merger can power a gamma-ray transient with a duration of 50 s. Future observations of these rare transients, hopefully as a source of GWs, will help to uncover the answers.

Brendan O'Connor
PhD Student, The George Washington University, University of Maryland College Park
Follow
Hi, I'm Brendan. I'm an observational astronomer studying cosmic explosions. My research is in the field of time domain and transient astrophysics. In particular, I am interested in the formation and evolution of high energy transients and their progenitors. I use a variety of optical, infrared, and X-ray observatories to study transient phenomena across the electromagnetic spectrum. 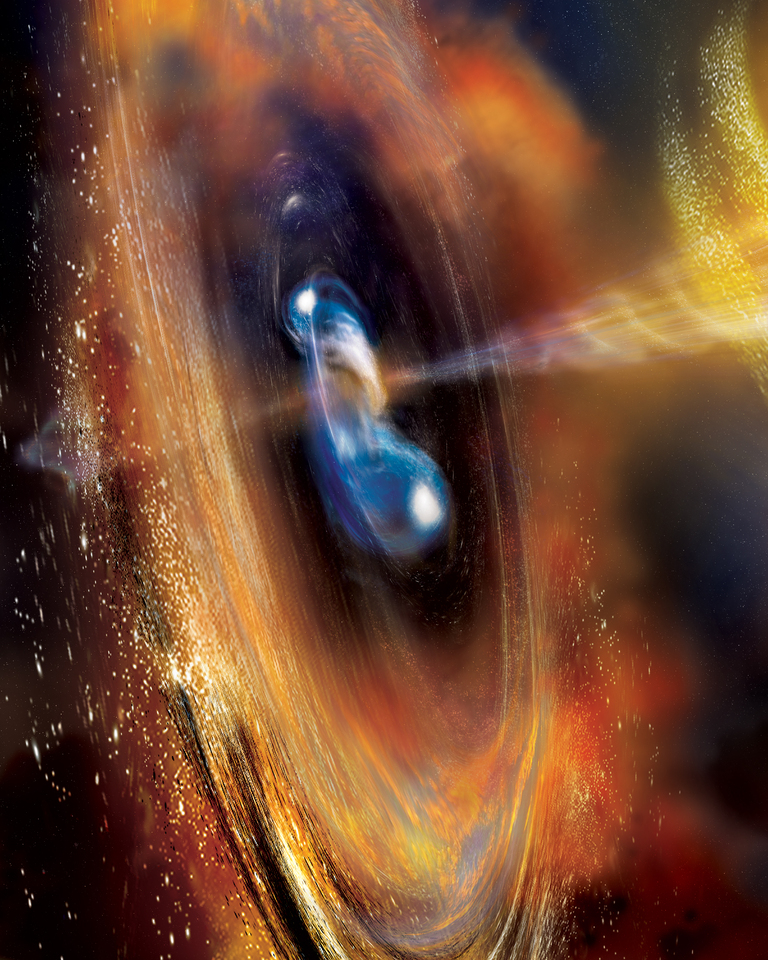