Detection of AUDFs01 by AstroSat opens up a new window to explore reionization sources​ with extreme-UV photons in the Cosmic Noon. The present observation and future detections by AstroSat can put new constraints on the shape of the ionizing spectrum of the stellar population.

In the history of the early universe, there was a phase from about 400 thousand to a few hundred million years when it was the darkest place. There was star nor any galaxy — an era known as the Cosmic Dark Age. The universe was filled mostly with neutral hydrogen then. Soon after, it went through a phase transition from neutral to ionized hydrogen. Ever wondered what might have caused this phase transition?

The usual suspects are the first astronomical objects, especially the newborn galaxies, that reilluminated our universe. However, we are yet to eyewitness that spectacular sight. Together with the light, extreme-UV photons too escaped from these primaeval objects and liberated the electrons from the hydrogen atoms - causing the re-ionization. Today, most of the matter between galaxies is in this state. Who knows what might have been the hidden motive of the universe behind this.

While the re-ionization era remains enigmatic, its ionizing sources continue to be elusive. The ionizing photons have to cross several barriers without being gobbled up by the interstellar, circumgalactic, and then intergalactic gas to reach the Earth. Not surprisingly, only a handful of ionizing sources are discovered, some at z<0.4 and others between 2.5 and 3.5. The redshift gap from 0.4 to 2.5 remained barren until the UltraViolet Imaging Telescope (UVIT) onboard AstroSat made its first discovery at z=1.42, a galaxy called AUDFs01 emitting extreme-UV photons at 600Å. AUDFs01 is the first ionizing galaxy from AstroSat Uv Deep Field (AUDF).

AstroSat was launched on Sept. 28, 2015, by the Indian Space Research Organization (ISRO) and became India's first Space Observatory. Although the 38-cm UVIT completed 28-hour observation covering the GOODS-South in Oct. 2016, a part of the observations was disrupted due to a Bright Object Detection. UVIT was turned off for a moment. I recall exchanging emails, late in the evening with Dipankar Bhattacharya and Shyam Tandon (IUCAA), and Seetha (ISRO). At the time, some people were sceptical about AstroSat's capability. Nevertheless, it exceeded every expectation.

In the beginning, running the pipeline on the complete dataset was disappointing. The end-product resembled just one-orbit image (Fig.1). Yet, there was an excitement that continually drove me towards the final goal. Thanks to Shyam, who was kind enough to allow me to pester him with 'stupid' questions. This project was technically my first observational experience! I started learning things bit by bit. I decided to dissect the Level1 dataset into individual orbits and began to analyze them orbit-wise. When all the dump-orbit images were stitched together, it was a moment of wow! Although astrometry was off! It has taken nearly two years since then to create the final version of AUDF, primarily due to the steady development of the pipeline, dealing with cosmic rays and astrometric correction. Making of AUDF was one of the most exciting times in my career. I used to spend hours just gazing and surfing on AUDF (Fig.2).

A lot happened during this period. I was introduced to Anne Verhamme, who was visiting IUCAA to deliver lectures on the escape of ionizing radiation from galaxies in an Indo-French school.  We started discussing possible projects. Meeting Anne was like meeting the right person in the field at the right time. I also vividly remember the conversation with Michael Rutkowski, who sent me a list of sources having high H-alpha Equivalent width. I visually examined them all, as I had no idea which one to zero-in. AUDFs01 was one of them, but not the one with the highest H-alpha EW! However, once I scanned the 3DHST catalogue, AUDFs01 was identified with the highest emission-line fluxes in the Hubble XDF. Even when this was settled, it took time to convince me that the far-UV detection was significant and not influenced by cosmic-rays. The simultaneous near-UV observation strengthened our claim.

I was fortunate to present this early result in a conference "Escape of Lyman radiation from galactic labyrinths" held in a beautiful place in Crete in Sept. 2018. I met Akio Inoue there. By that time, I was already in touch with Daniel Schaerer, Bruce Elmegreen, Francoise Combes, Debra Elmegreen regarding this project. Abhishek Paswan, Charlotte Simmonds, Anne Verhamme, and Anshuman Borgohain were always ready to roll. I thank them all for their team spirit.

Contamination is a big issue in this field. Initially, we were worried whether the fourth clump was at the same redshift and part of AUDFs01. Thanks to the HST grism, we could confirm its membership. I appreciate the thorough comments from both the referees, although it was draining towards the end! The gruelling editorial process, however, pushed this work to a new high.

Now, I have identified a few potential Lyman continuum leakers and enjoying the fun of exploring them. I appreciate ISRO for approving and conducting the next set of observations. With the upcoming dataset, I am hoping to create the deepest far-UV image of GOODS-South. So stay connected. 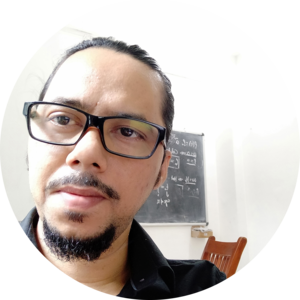 I am interested in learning how galaxies are formed in the early universe. And then I wish to follow their evolution and dynamics. I started my research career with analytical works in galactic dynamics, then moved into N-body simulation, and now I love ​observation.
Follow