Ion storage rings allow molecular reactions to be studied over orders of magnitude in time, bridging the gap between typical experimental and astronomical timescales. Here, damaged PAH molecules that could be abundant in space are shown to survive indefinitely in isolation.
Michael Gatchell
Researcher, Stockholm University
Follow
Like Liked by Evelina Satkevic and 1 other
0

Ion storage rings allow reactions to be studied over orders of magnitude in time, bridging the gap between typical experimental and astronomical timescales. Here the authors observe that polycyclic aromatic hydrocarbon fragments produced upon collision with He atoms at velocities typical of stellar…

I once read a popular science text that framed physics as the study of natural phenomena at all scales, from the very small to the very large, or from ultra-short timescales to the age of the Universe. While this is true for the subject as a whole, most fields in physics tend to focus on a limited sub-set of scales: exemplified in modern physics by the divide between quantum physics and relativity to give a sweeping example. This can cause issues when applying results from one field in another one where the relevant scales may differ significantly, something that can have a major impact on the quality and validity of the comparison. This is especially true in fields such as laboratory astrophysics and astrochemistry.

The interstellar medium (ISM) has a rich chemical composition with hundreds of different molecular species being identified so far. The particle densities are, however, in most cases significantly lower than what is usually found even in a laboratory on earth and a molecule can therefore have to wait for years (or longer) before they interact with another particle. Since we cannot directly collect samples of the material present in the ISM, observations are our only insight into the properties of those environments. To then interpret those observations, laboratory measurements and theoretical calculations play a crucial role in identifying the composition of the ISM and the reaction pathways that take place there. The conditions in the ISM are also harsh. Intense radiation, in the form ultraviolet light from young stars and high energy particles originating from stellar winds and supernovae, may damage or completely destroy molecules and other aggregates of matter such as dust grains.

Some of the largest molecules identified in space are species known as polycyclic aromatic hydrocarbons (PAHs). These are a family of molecules that consist of multiple fused rings of carbon atoms, typically containing six atoms in each ring, that can be thought of as flakes of graphene with their edges truncated with hydrogen atoms. PAHs are common pollutants from combustion processes on earth—in fact, one of the main carcinogens in cigarette smoke is a species of PAHs—and appear to be ubiquitous in the ISM, where a typical size is on the order of 100 carbon atoms. Partially due to their abundance in the ISM, PAHs have been a target of interest amongst groups involved in laboratory astrophysics and astrochemistry for decades.

In our group we have been studying PAH molecules for more than ten years at this point. In this regard, our main focus has been on interactions between energetic ions and isolated PAH molecules or cold, loosely bound clusters containing several PAH molecules. A conclusion that we and many others have made is that PAH molecules are very stable, both in terms of their resilience against damage (high dissociation energies) and in terms of their low chemical reactivity. With enough energy, however, they can still be broken down into smaller pieces, and in space the processing of PAHs has been proposed to play an important role in the production of molecular hydrogen as well as other large carbonaceous molecules such as fullerenes.

A key finding from our previous work has been that energetic atoms or ions may damage PAHs (and other types of molecules) very differently than other types of energetic radiation (photons or electrons) present in the ISM. Photons break down molecules though indirect means. The energy is absorbed, increasing the internal energy of the system, either by exciting the electrons or by inducing vibrational motion. Given enough energy and time, molecules excited in this way may fragment before they have time to cool by re-emitting one or more photons. A similar mechanism can also take place when atoms or ions impact a molecule, but another process may also occur, a process known as knockout. Knockout involves one or more atoms being directly removed from the molecule as the impactor strikes it through the transfer of momentum between individual atoms. In different studies we have shown that knockout can be readily studied using PAH molecules since the loss of a single C atoms from one of these molecules is highly unlikely to take place through any other mechanism. We also showed that PAH fragments formed from knockout are significantly more reactive than products formed by other fragmentation mechanisms, which could be important for chemical reaction pathways in the ISM. The only caveat though has been the question of timescales. PAH molecules damaged by knockout can only contribute to astrochemical reaction pathways in a meaningful way if they can survive on timescales of years or longer, long enough to interact with other isolated atoms or molecules.

Even for the slow collision that we have studied—slow in the sense the velocities of the atoms are much lower than the speed at which electrons orbit atomic nuclei, and well below the regime where any relativistic effects become apparent—where velocities are in the range of tens to hundreds of kilometers per second, the collisions that lead to knockout are still over in a few femtoseconds (10–15 s). The fragments produced in this way are relatively hot and may decay further by spontaneous secondary fragmentation on much longer timescales. Most experimental studies of gas phase molecules processed by energetic collisions are over in a few microseconds (10–6 s). While the exact duration of a single measurement may vary, this is the typical time it takes for the fragments to reach the detector that is used to analyze them in laboratory conditions. That means that most measurements only provide a snapshot of a process a few microseconds after the initial collision, but provide no information about the dynamics of the process at other times.

In a recent paper in Nature Communications, we follow for the first time PAH molecules damaged in energetic collisions over many orders of magnitude in time. We have been able to do this by taking advantage of the unique properties of the DESIREE (Double ElectroStatic Ion Ring ExpEriment) facility at Stockholm University in Stockholm, Sweden. DESIREE is a pair of electrostatic storage rings for storing ion beams and is one of only three facilities in the world operating ion storage rings under cryogenic conditions. The 13 Kelvin temperature of the storage rings, together with the state-of-the-art vacuum conditions, reduces the density of residual gas particles to levels similar to that in interstellar space, on the order of a single H2 molecule per cubic millimeter. The similarity in background gas densities between DESIREE and the interstellar medium is largely coincidental, but it does allow for the storage of ion beams for up to hours at a time without the ions being destroyed by collisions with the residual gas.

In the present experiments we stored fragments of the PAH molecule coronene that had a single carbon atom knocked out of them by collisions with He atoms at a velocity of 72 km/s in DESIREE. We were able to study the ions over timescales ranging from a few microseconds up to seconds or longer. Our main finding was that most of the fragments were produced cool enough to remain intact for the full duration of the measurement. By now you’ve probably realized that one second is a long way off from the astronomical timescales of years or longer that we claim to have measured. While that’s true, the key finding here is that the fragments that remain after 10 milliseconds will remain intact forever unless they are again heated by another process. We have thus arrived at the asymptotic conclusion that knockout indeed can lead to stable, highly reactive molecular fragments that may reside in the ISM, waiting to interact with a stray atom or other molecular species. And while we have specifically studied PAH molecules in these experiments, it is to be expected that collision-induced knockout processes will be equally prevalent even with other molecular species present in space.

This work has been in the making for over a decade now and we are very excited about the results. The Nature Communications paper containing the results can be found here: https://www.nature.com/articles/s41467-021-26899-0 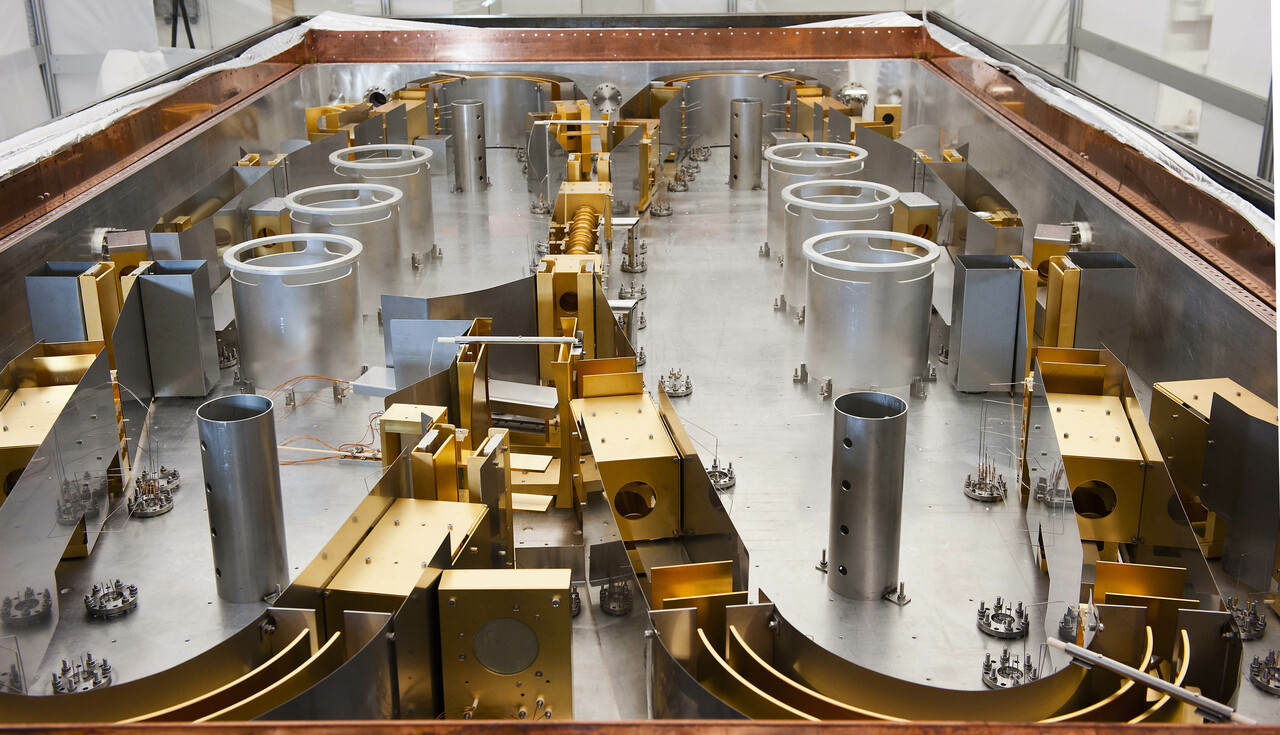 Ion storage rings allow molecular reactions to be studied over orders of magnitude in time, bridging the gap between typical experimental and astronomical timescales. Here, damaged PAH molecules that could be abundant in space are shown to survive indefinitely in isolation.