Craters and boulders are ubiquitous features of planetary surfaces. Craters on boulders on a near-Earth asteroid provide a unique opportunity to probe the time since the asteroid's departure from the main asteroid belt.

The OSIRIS-REx mission recently accomplished its goal of obtaining a sample from the surface of the asteroid Bennu. The event marked nearly 2 years since the spacecraft first arrived at Bennu. My first impressions of Bennu were ones of wonder and anxiousness, as the surface of the asteroid was far more rugged than we had anticipated (Lauretta et al. 2019). As part of the mission's Regolith Development Working Group (RDWG, led by Kevin Walsh), I participated in the effort to find a spot on the asteroid that was covered in fine grained material (< 2 cm) that could be ingestible by the spacecraft's sample container (Bierhaus et al. 2018).

Searching for a sample

In the course of looking for a sampling site, we obtained unprecedented detail of the surface of an asteroid. In July 2019, we undertook an observing campaign called Orbital B (Fig. 1a), where we obtained 1 cm/pixel scale resolution images of the surface (DellaGiustina et al. 2018). In this configuration, the spacecraft orbits the asteroid in the terminator plane, or the plane that divides the day-lit side and the dark night side of the asteroid. The images that returned were shadowy scenes (Fig. 1b), as the illumination angle from the Sun to the surface is quite steep. It was difficult to make out small particles, but we could sometimes see the long pixel-wide shadows they cast. So, we knew that they should be somewhere on the surface. Maneuvers by the spacecraft later in the year would provide better illuminated and higher resolution images of the surface, making the presence of fine particles more apparent.

What we saw in the shadows

The Orbital B images are beautiful, and revealed previously un-seen features of the boulders. It's like taking a walk in your neighborhood in the dead of night. You're going to notice different things compared to what you typically notice in the light of day. In these gloomy images of Bennu's surface, there would sometimes be a rock that would stand out from the shadows. When these stand-out rocks were flat, we noticed that they would be riddled with small holes (Fig. 2a).

I grew up in Beirut after the Lebanese Civil War. Most of the buildings in my neighborhood, including the one I grew up in, were riddled with bullet holes (Fig. 2b). They were just a part of the background for me, and I didn't think much of them when I was young. When I saw similar features on Bennu's boulders, it immediately clicked in my head that these little impact pits may have a similar origin. Of course, rather than gun-fire, these bullet holes must have been made by impacts by micro-meteorites. Similar features had been reported on the lunar samples returned by Apollo astronauts (Fig. 3, Hörz et al. 1975, 2020), and on the returned samples from the asteroid Itokawa (Nakamura et al. 2012). As we'll discuss later, the "bullet-holes" we see in Fig. 2a accumulated on that boulder in timescales of over a million years!

An unprecedented view of an asteroid surface

However, just as one can "see things in the shadows" that aren't really there, we needed to verify that these were indeed impact craters. Fortunately, just as we were taking those gloomy pictures of Bennu, the OSIRIS-REx Laser Altimeter (OLA), which was contributed by the Canadian Space Agency, created 3-D maps of the surface at about 5 cm resolution. The OLA data gave us breath-taking views of the asteroid surface. OLA removed all ambiguity on whether a crater was really a crater or just a trick of the light. With the help of the Altimetry Working Group (led by Olivier Barnouin and Mike Daly), we measured the morphology of the largest craters we found on boulders (Fig. 4), and confirmed that they had shapes similar to craters created in impact experiments in the lab. We moved forward, confident in our interpretation.

In search of time

With the help of the Image Processing Working Group (led by Dani DellaGiustina), we correctly registered images to a shape model of Bennu, and measured the sizes of the craters and their host boulder. We ended up measuring more than 600 craters on boulders. Based on the sizes of the craters relative to their host boulders, we came up with a method to estimate the impact strength of the boulders, which gave us an idea of what size impactors made those craters. We discovered that the counting statistics of these craters resembled that of near-Earth objects (Brown et al. 2002). So, we inferred that these craters on boulders must record Bennu's time in near-Earth space. Then, with the total number and sizes of the craters, we were able to measure the exposure age of the boulders--which we found to be 1.75 million years. This age is much smaller than the expected age of its surface (Walsh et al. 2019), and the disruption event that likely created Bennu itself more than 100 million years ago in the main asteroid belt (Bottke et al. 2015).  The returned samples will give us a clearer idea of the accuracy of our measurements of the near-Earth exposure age of the surface and the strength of Bennu rock. If verified, we can more confidently use the techniques we developed here on other airless planetary bodies in the future. 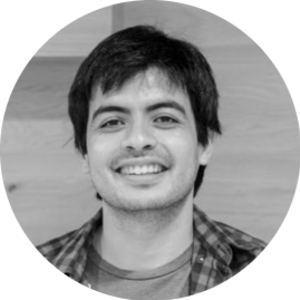 My research focuses on understanding the physical mechanisms that might change the surfaces and interiors of asteroids. The overarching questions that I try to address with my research are (1) how is the origin of life on Earth tied to the delivery of water and organic material by asteroid impacts, and (2) what is the present impact threat from asteroids to Earth’s biosphere.
Follow