The detection of two dark-matter deficient galaxies put the standard model in crisis, immediately prompting the search for exotic alternatives. Our results show that the standard paradigm can naturally re-create these oddballs, which are formed by extremely close encounters with a massive neighbour.
Jorge Moreno
Assistant Professor, Pomona College
Follow
Like Liked by Sorrel Bunting
0

A cosmological simulation shows that low-mass galaxies can form with far less dark matter than expected, with results matching some observed characteristics. Roughly one-third of massive central galaxies may host at least one such dark-matter-deficient satellite.

For over half a century, the existence of dark matter has been widely accepted by the astronomical community. From stellar motions in galaxies, to galactic velocities in clusters, gravitational lensing and the cosmic microwave background, dark matter is now regarded as one of the pillars of galaxy formation. In particular, low-mass* galaxies are expected to have higher dark-matter fractions. For this reason, the discovery of two dark-matter deficient galaxies by my co-author Shany Danieli, plus Pieter van Dokkum and their collaborators, took us all by surprise and provoked a crisis in our understanding of galaxy evolution. Apprehension grew when several cosmological simulations failed to produce numerical analogues of these mysterious galaxies. This also prompted explanations using more exotic alternatives, including modified theories of gravity.

In our recently published Nature Astronomy article we demonstrate that a cosmological simulation with dark matter is capable of naturally producing galaxies devoid of dark matter. Shany and I have been close friends for many years, and we always dreamed about writing a paper together. On the evening of 23 December 2020 I identified a few images of low-mass galaxies lacking dark matter in my simulations (Figure 1). I immediately sent these images to Shany via WhatsApp and told her "we gotta write a paper soon!" I also shared these images with co-author James Bullock, a world leader in galaxy formation theory and one of my personal heroes (I first saw James in 2007 at a conference, and his former student Kyle Stewart offered to introduce us, but I was too afraid!). My original sabbatical plans were to focus on merging galaxies using FIREbox, a novel cosmological simulation spearheaded by co-author Robert Feldmann. After a rather exhilarating conversation with James, I proclaimed to "drop everything I was doing and focus my attention entirely to this project." I also shared my results with co-author Phil Hopkins, who urged me to "check absolutely everything" and to "not leave a single stone unturned." This was echoed by other senior co-authors, like Eliot Quataert, who encouraged me to be as meticulous as humanly possible to guarantee that our results were "airtight." This was followed by a few intense months where I received tons of technical (and emotional) support from several members of the FIRE collaboration, who eventually became my co-authors.

After multiple checks and tests, we confirmed that we were the first to create a low-mass galaxy in a cosmological simulation with remarkable resemblance to the two observed dark-matter deficient galaxies on multiple fronts: stellar mass, stellar dynamics, size and shape. The yellow circles with green triangles in Figure 2 show our results. Our simulated galaxies have dark-matter-to-stellar mass ratios ranging from ~0.02 to ~0.78. No other cosmological simulation in the literature had ever created low-mass galaxies with such low dark-matter fractions until now!

Tempting as it might be to feel über-competitive, it is paramount to acknowledge the important contributions from other research groups around the world. After all, we are all together in this extraordinary endeavour to understand how galaxies form! In their 2021 paper, Ryan Jackson and collaborators used the NewHorizon cosmological simulation to show that the gravitational field associated with massive hosts can tidally dilute satellites off of their dark matter, explaining why the blue hexagons in Figure 2 are to the left of their average counterparts at the same stellar mass (the gray band). Unfortunately, none of Ryan's low-mass galaxies (with stellar masses below 1 billion solar masses) are able to cross into the dark-matter deficient regime (the yellow rectangle). They do report three galaxies with dark-matter-to-stellar mass ratios below unity, but these are over an order-of-magnitude more massive (in stars) than the two observed dark-matter deficient galaxies. Yingjie Jing and collaborators also found an interesting object in their 2019 paper. Unfortunately they report quantities that cannot be directly compared with existing observations. I asked him to prepare the datum shown in Figure 2 (orange pentagon), which he generously shared with us. This galaxy was found in a high-resolution version of the EAGLE simulation (EAGLE-highres), which leads me to believe that the TNG-50, the highest-resolution run within the IllustrisTNG series, might also possibly host similar objects. Unfortunately, the EAGLE-highres simulation is not able to re-create galaxies with dark-matter fractions as low as those found in FIREbox (or with stellar masses and dynamics in line with observations). Being able to create such extreme objects in such a large-volume simulation is truly staggering.

How, then, are these dark-matter deficient galaxies formed? Idealised numerical experiments, like those conducted by Andrea Macciò and collaborators, suggest that close encounters may play a pivotal role (see their 2021 paper, plus similar papers by other groups). Our work suggests that two conditions must be met: (1) a satellite must be interacting with a neighbour with approximately 1,000 more mass in stars and (2) the satellite must pierce within 5 percent of the dark-matter halo radius of the host. In general, satellite galaxies face one of two fates: either they assimilate onto the larger neighbour or are completely destroyed by the gravitational field of this massive host. However, our galaxies decided to follow a third alternative path: to confront their Goliath multiple times. Some of them cross the stellar component of their massive neighbour up to 9-14 times! But they pay a price: they end up losing most of their dark matter. Figure 3 shows one of our simulated massive galaxies being pierced by a satellite that eventually becomes a dark-matter deficient galaxy.

Why do most other cosmological simulations fail? One possibility is our sophisticated implementation of feedback-regulated star formation, which accurately captures the turbulent multi-phase structure of the interstellar medium. Another possibility is that the automated algorithms employed by other groups to identify galaxies fail to find these peculiar objects. In fact, I found our dark-matter deficient galaxies visually, after my own query algorithms failed. Something we learn from the works led by Ryan and Yingie is the importance of having extremely close encounters. None of the galaxies in Ryan's sample cross within 5% of the dark-matter halo radius of the host. Yingie's object does, but there might be more that were missed by their object-finder. For this reason, I encourage Ryan, Yingjie, and other folks using cosmological simulations (with volumes and resolutions comparable to EAGLE-highres, TNG-50 and NewHorizon) to double-check their catalogues.

Lastly, we predict that about one third of massive galaxies (with at least 100-billion solar masses) should harbour at least one dark-matter deficient satellite. We also note that galaxies similar to the Milky Way should not host such a galaxy. Interestingly, using the DC Justice League zoom simulations, Elaad Applebaum and collaborators find in their 2021 paper a dark-matter deficient galaxy orbiting a simulated Milky Way. Unfortunately this system is below their resolution limit. I encourage Elaad and his collaborators to re-run this system at higher resolution. Confirmation could really challenge the very predictions we pose here! But above all, future observational campaigns, with the Rubin Observatory Legacy Survey of Space and Time (LSST) and the recently launched James Webb Space Telescope (JWST), will hopefully help us characterise larger swaths of dark-matter deficient galaxies across a wide variety of environments, and put firm constraints on possible theoretical formation channels (within the standard cold dark matter paradigm or more exotic physics frameworks).

We name our dark-matter deficient galaxies Wolf, Wild Potato, Paint, Long Hair, Deer, Blue and Bird, in honour of the seven Cherokee clans. As a person of Indigenous ancestry, centuries of colonialism stripped me from my language and culture, but my core remains intact. I hope this article encourages those scholars who feel excluded from academic spaces to seek energy and curiosity from their ancestral core. Assimilation or exclusion are not the only available paths. With support from our communities, all of us have a responsibility to confront the various pernicious Goliaths in academia: bigotry, discrimination and exclusion. Being a scientist, and having the opportunity to collaborate with my friends, has been extremely gratifying. For this reason, I encourage you to reclaim your place in astronomy, which is your inalienable human right.

*I humbly invite the community to refrain from using language to describe low-mass galaxies at the expense of historically-excluded people with dwarfism.

Theoretical astrophysicist who employs numerical simulations to understand galaxy formation. These days I am interested in merging galaxies, low-mass galaxies, the circumgalactic medium, and the interstellar medium. 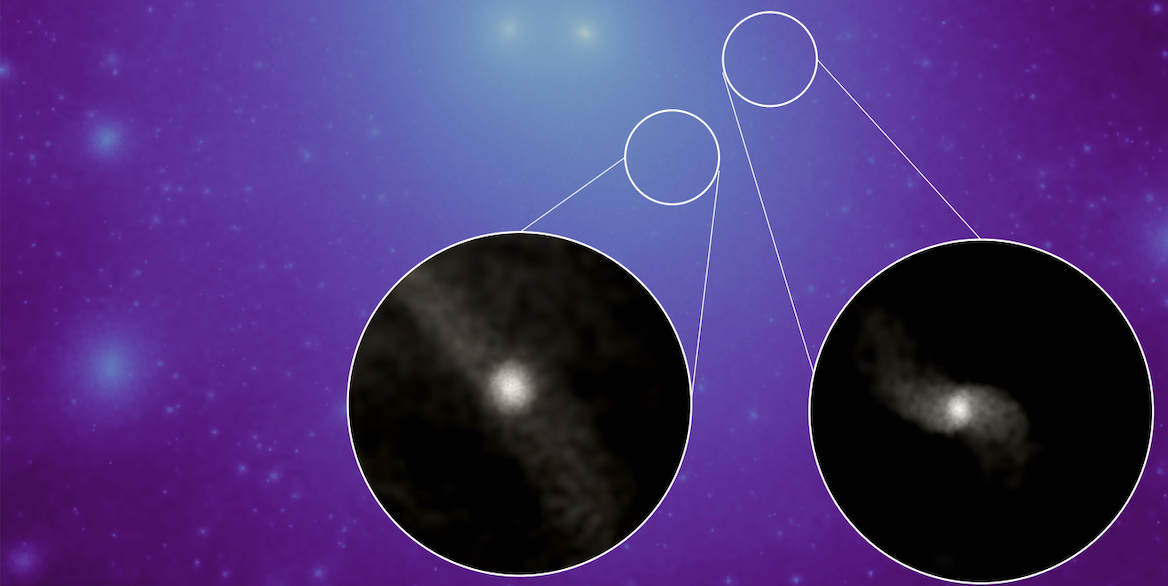 The detection of two dark-matter deficient galaxies put the standard model in crisis, immediately prompting the search for exotic alternatives. Our results show that the standard paradigm can naturally re-create these oddballs, which are formed by extremely close encounters with a massive neighbour.