Menu
A community from Nature Research
Contributor
News and Opinion

Gale crater was chosen as the landing zone for NASA’s 2011 Curiosity rover because it was considered by many to be the site of an ancient lake. New results cast doubt on the lacustrine model, but nonetheless the mission revealed amazing insights into Mars’ global stratigraphic puzzle.

In the years 2009-2011, members of the Mars science community met at multiple landing site workshops, typically in Monrovia, California to discuss science ambiguities of various potential landing sites. These science meetings are my personal favourite type because, unlike most other conferences, these ones have a sense of urgency. Using the remotely detected mineralogy, geomorphology and context, we have to make some recommendation to NASA about the scientific validity or intrigue of some top landing sites. To be fair, NASA leadership can and will choose whichever site they like, but it is very inclusive to hold such workshops, productive and informative to the process, and also likely reassuring for NASA to have a rubber stamp of sorts from the community.

While all the sites in the final groupings were excellent candidates, Gale crater was ultimately chosen as the destination for the Curiosity rover. The driving factors were twofold. The first was the likelihood that the basin must have contained a lake of some sort, at some point, for some duration of time. Community opinion has been all over the map so to speak on this one, as some researchers argued that the lake was large, occupying perhaps the entire area of the crater basin and deep, perhaps 500 meters to several kilometers of water. Others argued that most of the geology could be explained by air-fall sediments, and that a lake was not required – or if it existed, was only shallow and short-lived (e.g. Kite et al., 2013).

The second driver was the possibility for the mission to explore rocks recording a major mineralogical transition from Fe/Mg-clay bearing rocks to Al-clay-bearing rocks, and on to younger still sulphate-rich rocks (Milliken et al. 2010). Scientists argue about the meaning of this compositional stratigraphy, which we have observed globally but is well exposed in a handful of places such as Mawrth Vallis or Gale crater. Does it represent some great environmental transition? Does it represent a physical juxtaposition of contemporaneous processes? We do not know yet, but after more than 8 years of surface operations by the Curiosity rover, we are gaining clearer perspective. 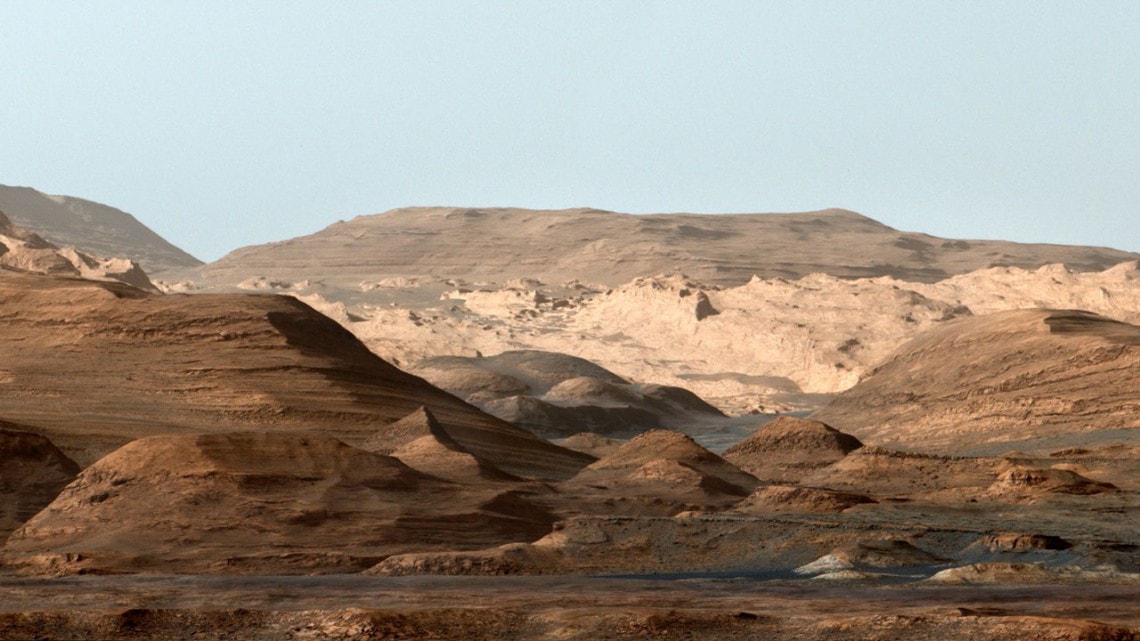 Figure 1: A view of the layered rocks in Gale crater taken by Curiosity rover's MastCam. Colors are adjusted to appear the way rocks would look on Earth. Image credit: NASA/JPL/ASU.

In a paper recently published by my PhD student (Adam) Jiacheng Liu and colleagues in Science Advances, we argue that Gale crater did indeed contain a lake, but that the rocks corresponding to a lacustrine environment make up only <1% of the stratigraphic section. Further, all the lacustrine rocks were visited by the rover only in the earliest days of the mission, 8 years ago. Since that time, the rover has traversed >400 meters of stratigraphy containing layered rocks, alteration minerals, sandy siltstones and more. But, none of these altered rocks is diagnostic of a lake environment except the thin beds of mudstone in the floor of the crater. 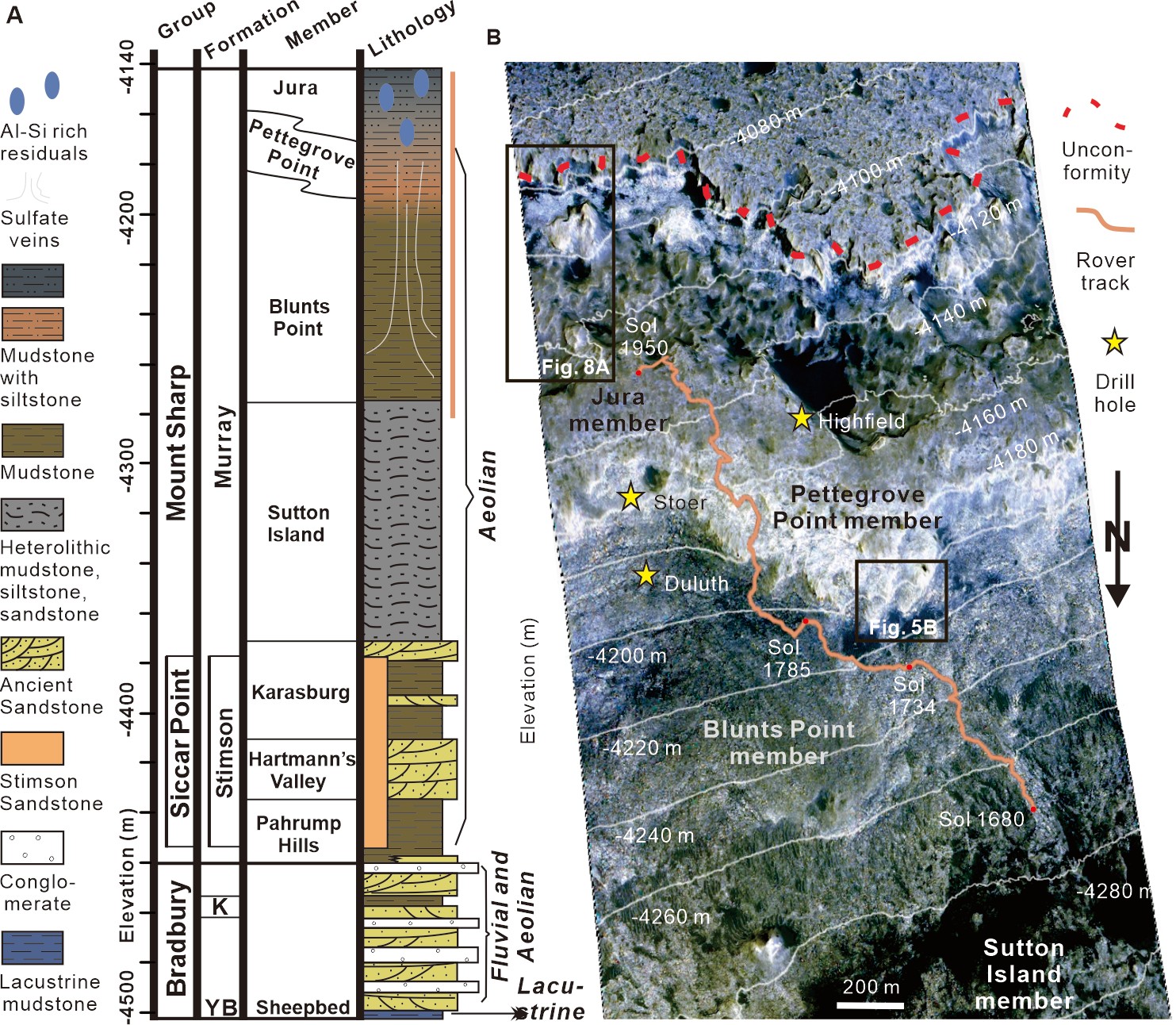 More importantly, the chemical trends observed in many measurements as the rover has ascended up the central mound follow a clear pattern. Elements that are immobile under chemical weathering conditions (e.g. Al and Si) become increasingly concentrated higher in the mound. Elements that are mobile (e.g. Mg and Fe) become increasingly depleted. Such a pattern is of element mobility and abundance is characteristic of deeply weathered rocks on Earth, though the pH, water/rock ratios and redox situations are potentially quite different on Mars than on Earth.

Figure 3: A color image of Gale crater from the High Resolution Stereo Camera (HRSC) was draped with colorized topography in blue. At the left, the topography up to elevation -4400 has been filled with water. This is a conservative estimate of the large lake model embraced in many interpretations (for example the "Dulce Vallis lake stand" described by Palucis et al., 2016). At the right is a small lakes model described in Liu et al., 2021 in which the topography was flooded only to a level of approximately -4500 m elevation. Final landing ellipse and landing site (star) are noted.

Interestingly, iron is only mobile under reducing conditions and is immobile under oxidizing conditions. So, it seems that the rocks in Gale crater were chemically weathered subaerially under a reducing ancient atmosphere containing methane and hydrogen gas. Further details of the scientific arguments can be found in the paper (Liu et al., 2021).

Perhaps the most important thing in this publication is that Adam has found a clear connection between a globally observed compositional phenomenon and the surface properties “ground-truthed” by the rover. Mentioned above, one of the great mysteries of Mars discovered in the last 10 years or so has been the observation of compositional stratigraphy around the planet. That is, we see Al-rich clays overlying Fe/Mg-rich clays in 1000s of exposures on Mars. This is quite unexpected for a planet made of basalt, or Fe/Mg-rich volcanic rock.

A top mission priority probably should be to visit the contact between these clay-rich compositional strata and discern the nature of the transition, but it would be hard to prioritize such a mission focused solely on this issue. But as we show in the paper, it seems Curiosity has already visited this mineralogical transition and it is seemingly due to global chemical weathering under an ancient reduced greenhouse. This piece of information is absolutely critical and perhaps one of the most important results from the entire mission. It comes full circle to the second driver of the Curiosity mission based on Milliken's work: to visit the great environmental transition. However, we argue that this is not necessarily an environmental transition, just a characteristic of the ancient environment on Mars. We still have yet to reach the main clay-sulphate boundary, and this exploration is likely to bring significant further insights.

The rover was sent to Mars to explore a lake, and a lake it found. Over the last 8 years, a large number of papers have interpreted the geology and geochemistry returned from the rover in the context of a lacustrine environment. But the arguments for a lake do not quite hold water, so to speak. The abundant cross-bedded rocks can be explained in a lacustrine context only if the lake level raised and lowered, allowing wind activity to build dunes that were later submerged below the lake level. The chemistry, which speaks of an open system environment does not add up to expected lacustrine chemistry in a basaltic system unless elements are somehow removed later. The mound itself does is not reminiscent of lake sediments and the lack of remnant “lacustrine” deposits around the interior of the crater basin all seemingly strongly challenge the lake model.

These possible inconsistencies dissolve away if there was not any large lake in Gale crater. Given the high stakes of rover missions, it is challenging to embrace a scientific course correction because of the immense resource invested. But, I would argue that the Gale crater site has significantly more value to the Mars community if understood as a stratigraphic keystone to the planet rather than a transient lacustrine environment. We as a community would have a hard time convincing NASA to invest in a Mars Stratigraphy Rover, but in fact, that is what we have accomplished. Even if the idea of vast Gale crater lake has run dry, there is abundant stratigraphy ahead for the rover to explore. I would argue that we stand to gain significantly more if we, at this point, abandon the lake model and embrace multiple working hypotheses in the coming years. 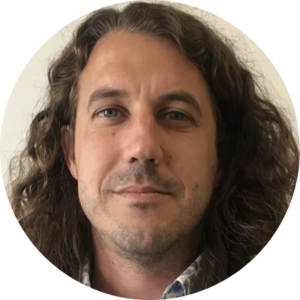