One of the most intriguing results from the Rosetta mission was the identification of the amino acid glycine. Our combined laboratory and modelling work shows that glycine can form ubiquitously in space under dark interstellar cloud conditions, well before the onset of star and planet formation.

In March 2015, the Rosetta spacecraft made a maneuver orbiting around the comet  67P/Churyumov-Gerasimenko (hereafter 67P) during which the probe changed its distance to the comet so rapidly that it allowed for distributed sources detection of molecules in the coma of 67P [1]. During this event the ROSINA mass spectrometer managed to sniff glycine, the simplest amino acid. This was an astonishing finding, as comets represent the most pristine material of our Solar System. Follow-up studies showed that the glycine detected by Rosetta in the comet’s coma was embedded in sublimating water ice from dust particles that were ejected from the nucleus of 67P [2]. At scientific meetings and in the astronomical literature it was then proposed that glycine must already be present on water-rich ice grains in the interstellar medium, before the onset of star and planet formation and it is then included in comets and planetesimals in a later stage of the star formation process. Hence one of the most intriguing outcomes of the Rosetta mission was that comets are now considered as a kind of chemical relics and that the building blocks of life, glycine as well as several other species present in their ice cores must have an interstellar origin [1]. Question remains, however, as to the chemical origin of interstellar glycine. To date, any international effort to find it outside the Solar System has been indeed unsuccessful [3].

The Rosetta mission was an eye-opener and I began thinking about possible solid-phase formation pathways for glycine in molecular dark clouds and its potential link to the detection of amino acids in the Solar System. In the years before, during my PhD and afterwards, I worked on molecule formation on icy dust grains, small ones, like water, but also larger ones, like glycolaldehyde and ethylene glycol. In October 2015, I was invited to present at the conference “From Clouds to Protoplanetary Disks: The Astrochemical Link” in Berlin, Germany. Perhaps it was something as simple as the title of the conference or the stimulating discussions with colleagues that made me wonder whether glycine could also be formed from simple abundant interstellar ices such as water, ammonia, carbon monoxide and methane through what we now call ‘dark chemistry’, referring to chemistry without the need of energetic radiation. Such chemistry is typical for dense cores inside dark clouds that are shielded from energetic UV-light. Dark clouds precede the chemical evolutionary stage where UV light takes over chemical processes in space. Five years passed between the conceptualization of an idea and the publication of our work in Nature Astronomy.

In these five years I traveled many times from the UK to the place where I did my PhD, the Laboratory for Astrophysics at Leiden Observatory, the Netherlands, starting a new scientific adventure with my PhD advisors, Profs. Harold Linnartz and Ewine van Dishoeck. Together with former and new colleagues, such as Dr. Gleb Fedoseev and Dr. Ko-Ju Chuang whom contribution proved to be pivotal to the success of the project, I employed SURFRESIDE2, an ultrahigh vacuum setup that we designed a few years earlier, to test a long list of non-energetic surface reaction routes to glycine at temperatures as cold as 10-20 Kelvin. Every time I visited Leiden, we managed to get a step further, but each visit also came with the necessity to perform extra control experiments. Through a systematic approach we tested all the possible scenarios under fully controlled laboratory conditions. First, we confirmed that methylamine, also detected and linked to glycine in comet 67P by the Rosetta mission, is an important precursor of glycine in space. Then, we were able to show that glycine and methylamine both form in water-rich layers of ice together with ammonia, methane and carbon dioxide, some of the most abundant ice components in the interstellar medium after water and carbon monoxide.

There was however a caveat. How can glycine form under dark cloud conditions in ices where the few mobile species are likely only atoms and perhaps molecular hydrogen? Until recently, it was thought that glycine formation required energy, setting clear constraints to the environment in which it can be formed [4, 5]. Among energetic processing worth mentioning are ultraviolet radiation from a protostar and/or field stars as well as cosmic rays and thermal heating. All those processes are thought to be especially important during advanced stages of star formation, that is after a dense dark cloud starts its gravitational collapse initiating the formation of a protostar. In this scenario, energy is needed to break simple ice molecules apart and diffusion is recalled to explain how precursors can meet and react to form species as complex as amino acids on interstellar ice grains. To link our laboratory data, recorded on a time scale of a single day, to processes that take place over millions of years in dense interstellar clouds we joined forces with two independent astrochemical modeler groups led by Prof. Herma Cuppen from the Radboud University, the Netherlands, and Prof. Rob Garrod, University of Virginia, the US. They transferred the laboratory data into an astronomical picture and the fruitful collaboration confirmed that dark chemistry in dense clouds is capable of producing relatively small but substantial amounts of glycine on interstellar ices, initiated through atom-addition and abstraction reactions through a previously not considered non-diffusive mechanism. Data showed that radicals formed nearby each other and with the correct orientation can indeed recombine to form larger molecules even at 10 Kelvin.

This was the point where it became clear that this work deserved publication in a high impact journal. Writing the main story was a great thing to do, but preparing the supplementary material with all the control experiments to fully underpin the correctness of our conclusions turned out to be a real challenge. After five years of hard work, tens of visits to Leiden, uncountable emails and more recently plenty of ZOOM meetings, we submitted our work this year to Nature Astronomy and we are proud that it now has appeared in Nature Astronomy.

An early formation of glycine in the evolution of star-forming regions implies that glycine can be formed more ubiquitously in space and be preserved in the bulk of interstellar ices before inclusion in meteorites and comets during planet formation in protoplanetary disks surrounding newborn stars. Glycine formed in the ice is likely to stay on interstellar grains even at temperatures higher than the sublimation of water, explaining why it seems to be so elusive to detection in the gas phase beyond the Solar System. Following the same non-diffusive mechanism, in principle, other functional groups can be added to the glycine backbone, resulting in the formation of other amino acids, such as alanine and serine in dark clouds in space. The implication is that proteinogenic α-amino acids, the building blocks of the proteins relevant to life on Earth, could potentially form at the very earliest stages of star formation as well and persist until planetary systems are established. The seeds of life are already formed well before stars and planets are born and as the process we have studied is universal, this also means that the Universe must be littered with molecules that we consider the building blocks of life as we know it. Now we also know where to search for them. 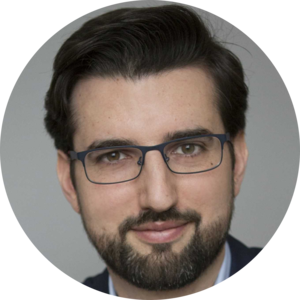 Astrophysicist and astrochemist by training, in 2010 I obtained my PhD at the Leiden Observatory, Leiden University, the Netherlands. In the following years, supported by prestigious fellowships, e.g. Marie Curie IOF, I applied different techniques, e.g. THz time-domain spectroscopy (Caltech, USA), and developed numerous ultrahigh vacuum systems to investigate the formation of molecules in space ice analogs from the ultraviolet to the far infrared spectral range. In 2015, I started my Royal Society URF at the Open University (UK), where I became research leader in the Molecular Astrophysics laboratory. In 2017, I moved to Queen Mary University of London (QMUL) as a lecturer within the Antennas group, further developing my link to the UK THz community. My research group at QMUL applies ultrahigh vacuum laboratory techniques to investigate the molecular evolution of the Universe at large international facilities such us free-electron lasers (FELIX Laboratory, NL), ion accelerators (MTA ATOMKI, HU) , and synchrotrons (ISA ASTRID2, DK).
Follow