The axion is one of the most sought-after dark matter candidates, but experimental efforts to detect it have been hampered by the fact that the mass of the axion particle is presently unknown. By running state-of-the-art simulations we provide the most precise estimate for the axion mass to date.
Malte Buschmann
Postdoctoral Research Scholar, Princeton University
Follow
Like Liked by Evelina Satkevic and 2 others
0

The question of what axion mass would give rise to the observed dark matter abundance requires proper modelling of non-linear dynamics of the axion field in the early Universe. Here, the authors use adaptive mesh refinement simulations to predict a mass in the range in the range (40,180) microelectr…

Dark matter makes up an astonishing 85% of all the matter in the universe, yet its exact nature is still a mystery. There are many theories as to what it could be but none of them have been proven to be true yet. Of those theories, the axion is a particularly interesting dark matter candidate as it wasn't originally invented to explain dark matter.

Instead, the axion was designed to explain why the neutron's spin doesn't precess or wobble in an electric field. This non-observation was first measured in the 1950s and still has no explanation in the Standard Model of particle physics today.

It was quickly realized that this puzzle pointed towards the existence of a new fundamental particle, the axion, which would interact with the strong nuclear force. It was later discovered that this particle could also explain the completely unrelated issue of dark matter as well.

Not long after its introduction in the late 1970s by Roberto Peccei and Helen Quinn, the hunt for the axion began. A plethora of experiments emerged over the decades, most of which are based on the effect that axions can convert to photons in the presence of a magnetic field.

However, the problem these experiments face is that in order to have a measurable effect, this conversion has to be achieved resonantly. But as the required resonance frequency depends on the unknown mass of the axion particle, every possible resonance frequency has to be tested individually. This is incredibly cumbersome and one of the main reasons the axion has neither been discovered nor has its existence been excluded yet.

The issue can be alleviated with a theoretical prediction for the axion mass, which is the goal of our paper.

Large numerical simulations are required to study the axion field in the early universe. Without them, we cannot make a prediction for the axion mass. This animation shows the axion energy density.

That it is possible to predict the axion mass has been known for a long time. (With the minor technicality that the underlying Peccei-Quinn symmetry cannot be spontaneously broken before inflation, in which case a prediction is impossible.)

All one would need to do is to understand the evolution of the axion field during a crucial time in the very early universe, when its average temperature is between 1025 and 1013 Kelvin. Unfortunately, the equations of motion describing this evolution cannot be solved analytically and one relies on numerical simulations on a large 3-dimensional lattice.

Performing these simulations is inherently difficult due to the various scales involved. One needs to maintain a large simulation volume while simultaneously resolving small-scale features known as axion strings.

Axion strings are topological defects that lose energy by radiating axions, and it is this radiation that ultimately sets the axion mass. The size of the lattice is key to carefully understanding the evolution of the axion strings.

The earliest simulations in the 1980s used grids with only 1503 lattice sites, while today's benchmark had been closer to 8,1923 lattice sites. By being the first group to apply a well-known numerical technique called adaptive mesh refinement, we were able to run simulations equivalent to that of a 65,5363 lattice site grid with an over three orders of magnitude leap in dynamic range over previous works.

Evolving a grid of that size, even with adaptive mesh refinement, has been a huge computational task. Our largest simulation used a total of 69,632 CPU cores for over three days, generating about 50 Terrabytes of output that had to be analyzed.

The evolution of axion strings can be violent, at times creating large shockwaves in the axion energy density. This box shows just 0.2% of our entire simulation volume.

Ultimately, we predict an axion mass between 40 and 180 microelectronvolts, which is not accessible by already existing experiments such as ADMX and HAYSTAC. Accessing our predicted mass range will require new experimental programs that search for higher-frequency signals than in the currently-running experiments.

Our result is the most precise estimate of the axion mass to date, though we hope to refine this result even further in the future by building off of our computational framework in conjunction with cutting-edge supercomputing facilities.

Postdoc in particle physics trying to shed light on the dark side of the universe. 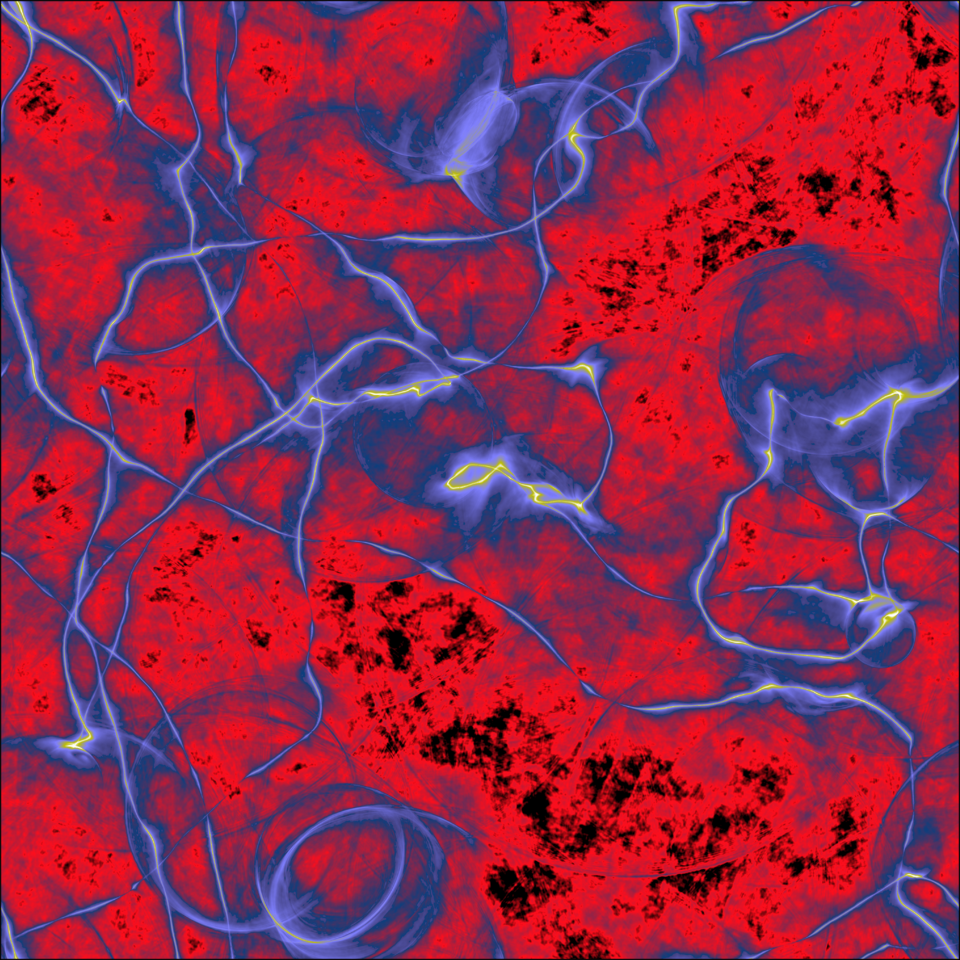 The axion is one of the most sought-after dark matter candidates, but experimental efforts to detect it have been hampered by the fact that the mass of the axion particle is presently unknown. By running state-of-the-art simulations we provide the most precise estimate for the axion mass to date.