You probably already know this, but I always find it moving to talk about. Every object, every living thing around us is the result of stellar nucleosynthesis. In the words of an astrophysicist whom I deeply admire and who made me want to do research, Carl Sagan “we are made of star stuff”.

This view has not always been the case. After the discovery of a new element, Helium, in the spectrum of the Sun by Jules Janssen in 1868, and the theories of Arthur Stanley Eddington in the 1920s, it was not until the late 1950s that the theory of nucleosynthesis took hold.

This is intriguing because Fluorine has a relatively low atomic number (9), and compared to its near neighbours, Carbon, Nitrogen, Oxygen, and Neon, it is far underproduced in the course of stellar evolution, making its origin more complex. In fact, the abundance of Fluorine is the lowest among all elements between atomic numbers 6 and 21, and is 3-4 orders of magnitude below that of C, N, O, and Ne.  This element is particularly intriguing and fascinating but also dangerous (as it burns or explodes on contact with several other elements). We are familiar with this element because we have it in our bodies in the form of fluoride, mainly in our teeth and bones, and especially because most of the toothpaste we use contains it, helping prevent cavities. Furthermore, and I will come back to this point, Fluorine is also the most electronegative element and this property is fundamental in understanding why this detection is so interesting.

Several stellar sites have been proposed as Fluorine factories: asymptotic giant branch (AGB) stars, core-collapse supernovae, and Wolf-Rayet stars. Until now AGB stars have been observationally proven to be sites of Fluorine production. However, the contributions of each of these stellar sites are widely debated, and it is difficult to know which processes are dominant. This is one of the key topics discussed in the paper published today in Nature Astronomy (https://www.nature.com/articles/s41550-021-01515-9).

Before developing this point, I would like to go back to the genesis of the paper’s discovery. I am not originally a chemical enrichment expert, and I last studied chemistry a long time ago. I’m interested in distant galaxies, detected and characterized by their dust emission, mainly using ALMA.

I had the chance to study in detail the spectrum of a distant galaxy at z=4.4, with a very high infrared luminosity, and I was particularly interested in understanding the phenomena that made this galaxy so bright. It turned out that this exceptional luminosity was partly due to its amplification by a foreground galaxy. However, one detail of its spectrum surprised us. We noticed an absorption line that we were not expecting, a hydrogen fluoride (HF) line. This detection was therefore totally fortuitous. This is where the story of this paper begins.

After a compilation of data from the literature, we found that the detection of Fluorine in galaxies beyond the Milky Way and its neighbouring galaxies was relatively rare. What was even more unusual was that the galaxy we were studying did not host an active galactic nucleus (AGN), whereas the rare detections of HF in the high redshift literature were all made in galaxies that did host one. This made the interpretation of the spectrum much clearer. We therefore took advantage of our detection to discern how the different models of Fluorine production, usually adopted for the interpretation of results in the Milky Way, behave at high redshift.

The uncertainties associated with this adaptation to high redshift are substantial. The initial mass function, i.e. the mass distribution of stars when they are born, is still poorly constrained at high redshift. There are also uncertainties of the Fluorine yields due to the nuclear reaction rate uncertainties, uncertainties on the stellar mass loss, or the rotation rate of massive stars. We took these constraints into account to make our models as conservative as possible.

The result is that given the age of the galaxy, observed as it was 1.3 Gyr after the Big Bang, and the large abundance of Fluorine that we measure, the relatively slow Fluorine formation processes involving low mass stars appear to be in the minority compared to those involving very massive stars - Wolf-Rayet stars. This result is really exciting and will need to be confirmed by further observations of this element in other high-redshift galaxies.

Finally, as mentioned above, Fluorine is the most electronegative element. It associates very strongly with most other elements and in particular, with H2. This reaction is exothermic and takes place without the need for external energy. For this reason, hydrogen fluoride represents nearly 100% of gas-phase fluorine over a wide range of temperature and density.

A problem we often encounter when studying a high redshift galaxy is that hydrogen in its molecular form is difficult to probe, because of the high excitation temperature of the lowest rotational transition and the lack of permanent dipole moment. The gas mass of a galaxy is however a key element for understanding galaxy evolution. In order to estimate this quantity, we use other tracers (mostly low-J CO transitions) but these proxies have many limitations (they can depend on the metallicity of the galaxy, be destroyed by cosmic rays from star formation or be almost useless in very cold regions or for especially low column densities). Fluorine, thanks to its affinity for H2and its high stability in the interstellar medium, could be a decisive ally in this respect. Fluorine would not be used to measure H2directly, but if a simple relation between H2 and HF can be characterised at high redshift (the current lack of detections prevents a clear vision of this for the moment), HF could be used to calibrate existing tracers of H2.

I would like to emphasise that all of the co-authors of this paper contributed in a significant way to the study, and to the interpretation of the different results. The pooling of skills that we did not have individually was a worthwhile and fulfilling experience. I worked for the first time with several of my co-authors during the writing of this paper, and I sincerely hope that these collaborations will last. 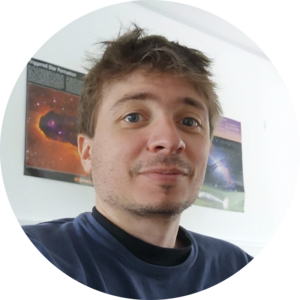 My current research focuses on the evolution of the massive high redshift galaxies. I use IR and submm/mm wavelengths to probe the early Universe and understand the transition between star-forming and quenched galaxies.