Discovery of high-frequency-retrograde vorticity waves in the Sun

Despite being our closest star, and observed 24/7 by 4k cameras, the Sun still has plenty of surprises that challenge our understanding of its interior.
Chris S. Hanson and Shravan Hanasoge
2 contributors
Like Liked by Charles Thiede and 3 others
0

The discovery of high-frequency inertial waves in the near-surface layers of the Sun—travelling much faster than hydrodynamics alone would allow—points to hidden dynamics of unknown nature below the surface of the Sun.

The interior of the Sun is opaque and inaccessible to direct imaging using electromagnetic radiation. As a consequence, we use measurements of resonating sound waves to image the interior structure and flows. Turbulent convection in the near-surface layers excites a spectrum of sound waves (period of ~5 minutes) that propagate into the interior and return to the surface where they are observed. These waves are sensitive to flows in the interior, e.g., waves are sped up or slowed depending on their propagation direction in relation to the flow. The set of techniques that use acoustic waves to make determinations of the solar interior is collectively known as helioseismology.

For decades, theorists have suggested the existence of solar inertial waves, which are a type of hydrodynamic wave found in rotating fluid bodies. On Earth, inertial waves play an important role in weather systems, such as driving cold polar air from the arctic into North America. In the Sun, they likely play a role in transporting angular momentum to the equator, allowing the Sun’s equator to continue rotating faster than its poles. Most importantly, they are sensitive to critically important properties of the solar plasma, such as details of the stratification and the effective turbulent viscosity, that are otherwise hidden from us. The restoring mechanism of inertial modes is the Coriolis force and these waves have oscillation periods comparable to or longer than the rotation period (28 days). A distinct property of the Rossby wave, a particularly well known inertial wave, is that it propagates in the opposite direction (retrograde) to the Sun’s rotation. Loeptien et al. (2018) reported, in this journal, the detection of equatorial Rossby waves using helioseismic techniques to measure the induced fluid motions. The dispersion relation, which relates the temporal frequency to the spatial wavenumber of the wave, was found to compare remarkably well to simple theory. Since then, a number of studies have set out to characterize the Rossby waves and to find other inertial wave types predicted by theory such as magnetized-Rossby waves or thermal-Rossby waves.

Using a new powerful helioseismic technique known as mode-coupling, we have detected an unexplained and distinct set of inertial waves. These waves travel retrograde at three times the speed of Rossby waves, appear as equatorially anti-symmetric vortical flows and have amplitudes one-third of the Rossby waves. We call these waves high-frequency-retrograde (HFR) vorticity waves.

What is unusual about these HFR waves is that they propagate faster than equatorial Rossby waves, which already travel at the greatest phase speeds permitted by hydrodynamics alone (see Figure 1.). One possible suggestion is that HFR waves are influenced by magnetism, gravity or convection, acting to accelerate them.

Theorists have suggested that coupling between the Rossby waves and toroidal magnetic field at the base of the Sun’s convection zone (at around 70% of the Sun's radius), could modify the wave dispersion relation. Given the correct field strength and configuration, these might serve to increase the frequencies of Rossby modes to achieve the dispersion relation of HFR modes. If these HFR modes were magneto-Rossby waves, this would give us profound insight into magnetic structures of the deep solar interior. However, we use numerical studies and theoretical arguments to demonstrate that, for a range of field configurations, magnetic fields tend to induce a very different dispersion relation than that exhibited by HFR waves. Furthermore, the Sun is a magnetically active star, with a cycle of 11 years. If the HFR modes were magnetic in nature, then we expect the dispersion relation to change during the cycle, as the toroidal field amplitude winds up and down. Our observations show that the dispersion relation of the HFR modes is stable throughout the solar cycle, suggesting that magnetism ought to be excluded.

We then investigated the possible role of gravity. Internal gravity waves are thought to be trapped in the interior of the Sun, with their motions undetectable by current observational techniques. In this scenario, Rossby waves would couple with these internal gravity waves, forming a new type of wave known as the Yanai wave, which, if confirmed, would be the first incontrovertible detection of the Sun’s gravity waves. However, these waves are theoretically predicted to be symmetric across the equator, unlike HFR modes. Furthermore, we argue that this would require the transition layer from the outer convection zone to the radiative interior to be extremely thin, on the order of 0.001% of the Sun’s radius, contrary to current theoretical expectations and independent observational constraints.

Thus, we have yet to identify the source of the HFR modes, since they appear to defy explanation by simple hydrodynamics alone and also by several coupling mechanisms. The undetermined nature so far of these waves promises novel physics and fresh insight into solar and stellar dynamics.

The  Center for Space Science at NYU Abu Dhabi is funded by NYUAD Institute Grant G1502. SH acknowledges funding from the Department of Atomic Energy. KRS and SH acknowledge support from the King Abdullah University of Science and Technology (KAUST) Office of Sponsored Research (OSR) under Award No. OSR-CRG2020-4342. This research was carried out on the High Performance Computing resources at New York University Abu Dhabi and the computer centre at TIFR. This work utilized data from the National Solar Observatory's GONG network of instruments. The HMI data is courtesy of NASA/SDO and the HMI Science Team. 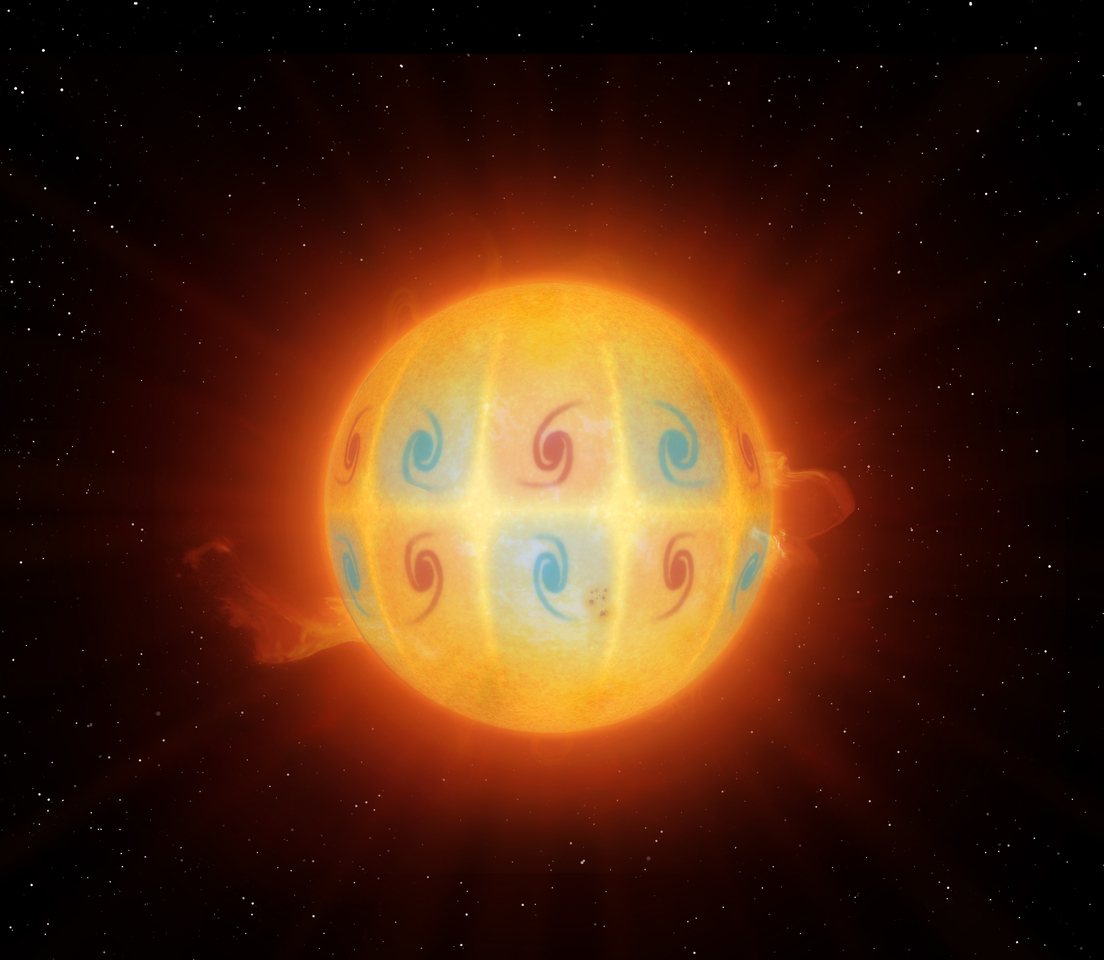 Discovery of high-frequency-retrograde vorticity waves in the Sun

Despite being our closest star, and observed 24/7 by 4k cameras, the Sun still has plenty of surprises that challenge our understanding of its interior.