How do tiny, cool loops in the Sun produce Super-Hot plasma?

NASA's Interface Region Imaging Spectrograph (IRIS) and Solar Dynamics Observatory (SDO/AIA) together reveal the mechanisms that release stored magnetic energy and then dissipate it to heat plasma in the solar atmosphere to multi-million degree temperatures.
Shah Mohammad Bahauddin
Research Faculty, Laboratory of Atmospheric and Space Physics, University of Colorado Boulder
Follow
Like Be the first to like this
0

Solar imaging and spectral data indicate that impulsive heating through magnetic reconnection in transition region loops is responsible for observed transient brightenings, consistent with ion cyclotron turbulence due to strong currents at the reconnection sites.

One of the most enduring problems in modern astrophysics is to explain how energy is transported to the outer atmosphere of the Sun, creating the million-degree corona and accelerating the solar wind. It has been observed that the atmosphere of the Sun is highly structured and non-uniform, reflecting rich magnetic structure and activity. Here magnetic fields and plasma compete for dominance as one goes from the photosphere through the chromosphere to the corona. The interface region that lies between the chromosphere and the corona is called the transition region. Compared to the photosphere, the chromosphere and the corona, the transition region is extremely narrow in height with a steep temperature gradient and a decrease in the electron density by three orders of magnitude. The emission from the transition region cannot be fully explained by a simple thin, homogeneous boundary layer, and it has been argued that the majority of transition region emission is dominated by dynamic, low-lying structures with peak temperatures < 1 million kelvin. Because of inadequate spatial resolution in past observations, these structures were called the “unresolved fine structure” and believed to store an abundance of clues to the dynamics of the transition region and the mechanism of energy release in the adjacent layers of the sun’s atmosphere. Recent enhancements in the spatial and temporal resolution of observations due to the Interface Region Imaging Spectrograph (IRIS), launched to orbit in 2014, have made it possible to study these structures in rich detail.

The study and findings presented in the Nature Astronomy article “The Origin of Reconnection-mediated Transient Brightenings in the Solar Transition Region”, authored by Shah Bahauddin, a research faculty at LASP and his colleagues at Rice University and NASA Marshall Space flight center, began with an effort to analyze a large sample of isolated, fine-scale structures that displayed a transient brightening, with the purpose of characterizing the events with respect to changes in temperature and density, the speed of bulk flows, and profiles of the spectral lines used for the plasma diagnostics. The goal was to develop a realistic model based on a series of numerical experiments in order to determine the general properties of the driver, such as rate of energy input, timescale and inter-event period, location and spatial distribution that are responsible for powering these structures. To achieve this, the study included co-aligned observations from Atmospheric Imaging Assembly (AIA) and Helioseismic and Magnetic Imager (HMI) of the Solar Dynamics Observatory (SDO) as well.

The context image observations revealed that applying un-sharp masking recovers the loops’ previously unresolved filamentary nature, comprising several sub-loops or magnetic strands, where only single, monolithic loops were visible in the unprocessed images. The strands had the appearance of braids in regions where brightenings appeared subsequently. The spectrograph observation further revealed two strong, but oppositely Doppler-shifted, components to the Si IV spectral line profiles at the location and onset of the brightenings. The width of each component was broadened significantly in excess of that expected from thermal processes and instrument effects alone. There was also evidence to suggest the much weaker S IV lines behaved similarly. However, no Doppler-shifts or excess broadening were measured in O IV lines.

The observations of filamentary structure within the magnetic strands and the oppositely Doppler-shifted spectral line components support the presence of reconnection and the subsequent jet formation. However, the excess line broadening particularly seen in heavier ions were was exciting because it hinted us the underlying physical mechanism that was driving the reconnection. By combining our observation and numerical analysis, we demonstrated that magnetic reconnection, via field-line braiding, releases energy from the magnetic field and then ion cyclotron turbulence plays a role in preferentially energizing heavier, more abundant ions, which are susceptible to the ion cyclotron instability. Energy release and then dissipation are the two critical stages of plasma heating and we believe that our observations are the first to show clear signatures of the physical mechanisms associated with each stage at work together in the transition region to produce the transient brightenings in the fine-scale structures, a testament to IRIS’s instrument capability and prowess. Furthermore, it is well-known from in-situ measurements that heavier ions are hotter than lighter ions in fast solar wind streams, which suggests these mechanisms operate throughout the solar atmosphere and may consequently provide a solution to the problem of coronal heating. 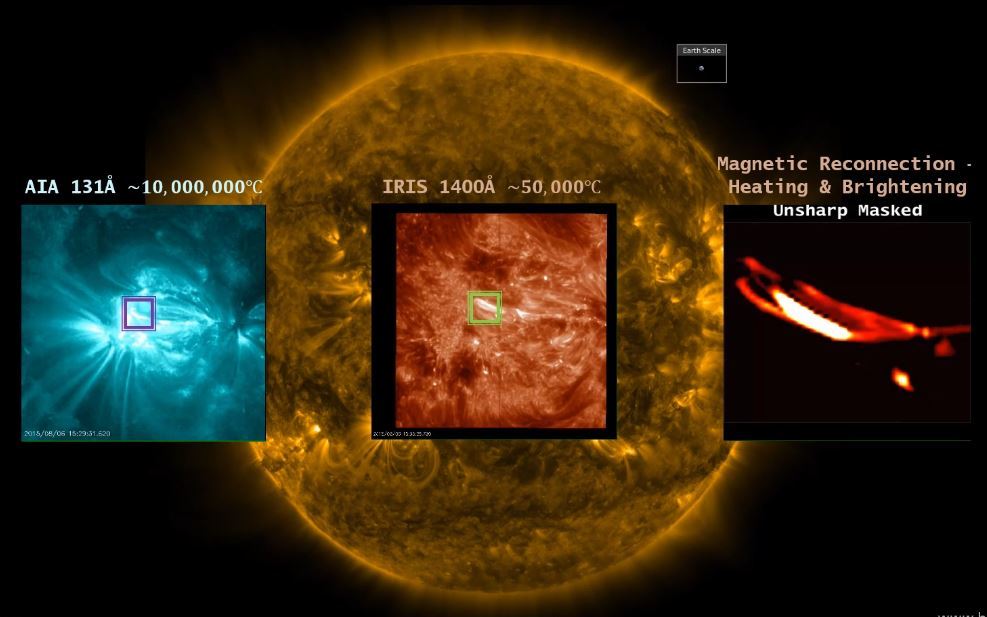 How do tiny, cool loops in the Sun produce Super-Hot plasma?

NASA's Interface Region Imaging Spectrograph (IRIS) and Solar Dynamics Observatory (SDO/AIA) together reveal the mechanisms that release stored magnetic energy and then dissipate it to heat plasma in the solar atmosphere to multi-million degree temperatures.