A community from Nature Research
Contributor Springer Nature
Behind the Paper

For the first time in history, a NASA Mars rover is examining and carefully selecting samples to be brought back to Earth. But, most of Mars' surface has experienced shock from asteroid impacts. What are the consequences for studying shocked Martian rocks in Earth labs? Our team set out to find out.
Svetlana Shkolyar, Barbara A. Cohen, Juan Manuel MADARIAGA, Steven Jaret & rwiens@purdue.edu
5 contributors
Like Liked by Evelina Satkevic and 1 other
0

The Perseverance rover (Mars 2020) mission, the first step in NASA’s Mars Sample Return (MSR) program, will select samples for caching based on their potential to improve understanding Mars’ astrobiological, geological, geochemical, and climatic evolution. Geochronologic analyses will be among the k…

In the middle of the COVID pandemic, one of the brightest pieces of science news was the successful landing (Fig. 1) of the Perseverance rover on Mars on February 18, 2022.

Perseverance is the second of the 1-ton class NASA rovers on the red planet. The Perseverance mission was designed to meet four goals: (1) explore an astrobiologically relevant ancient environment, (2) search for biosignatures, (3) collect and document a suite of scientifically compelling samples for return to Earth, and (4) demonstrate technologies needed for human exploration on Mars (Farley et al. 2020). Most importantly, it is the first in a series of missions, and the first ever in history, planned to return carefully selected samples to Earth as part of the Mars Sample Return (MSR) campaign. On Earth, higher resolution studies will be performed to extend and complete these four goals after MSR.

The landing site for Perseverance is Jezero Crater, a small (45 km diameter) crater situated near the edge of one of Mars’ largest ancient impact features, Isidis Planitia. Jezero Crater was selected partly for its potential to preserve biosignatures in what scientists think are ancient deltas, where rivers once flowed into a lake.

So far, about a year and a half into the mission, Perseverance has collected eight samples (see Fig. 2) in drill-core tubes for Earth return. Thirty additional tubes remain to be filled over Perseverance’s journey, which is expected to continue successfully for many more kilometers and years.

In February 2022, Perseverance began the drive to the edge of the delta formation, up the rim, and out of the crater ( Fig. 3) to explore its surroundings. Rocks analyzed here will probably show abundant evidence of impact shock, which has significantly affected the evolution of Mars’s surface. A "shock wave" radiates out from the point of impact when an asteroid or comet hits the solid surface of a planet. This modification can affect the record of the planet's history, so in selecting surface samples to return to Earth, it is important to recognize any that have been affected by shock processes.

Perseverance is likely to explore significant amounts of shocked materials. In light of this, we recognized the importance of studying the effects of shock in samples that Perseverance will select for return to Earth. In our work, we examined features of shock in one particular mineral that may allow us to avoid selecting it for return. We chose feldspar because it is widespread in the crystalline rocks that make up the Martian surface.

Members of our team are looking forward to the return of Mars samples. In our labs, we will try to understand the processes that took place on the planet - like what organic materials are contained in them (astrobiology) and how old they are (geochronology). But, if returned samples are shocked, it could have negative consequences for both geochronology and astrobiology studies on Earth. The high pressure and heating associated with impact shock could alter a rock, hampering both types of analyses. For geochronology, a shock wave passing through the material could deform its atomic-scale mineral structure and alter isotopic signatures through heating and diffusion, which would in turn complicate interpretations of the age of that rock. For astrobiology studies, shock effects may alter any preserved carbonaceous structures or microtextures preserved in a rock, hindering the ability to distinguish whether their origin is biogenic or abiotic.

How could we help the mission team understand how much shock was experienced by samples that may be cached for MSR? Originally, we conceived of a laboratory study to make measurements on a suite of experimentally shocked Mars analog samples with instruments similar to those on Perseverance’s payload. Lab work was supposed to occur from 2020-2021, allowing time to make recommendations on sampling protocols well in advance of the rover’s landing.

But in March of 2020, COVID lockdowns began, causing laboratory restrictions that complicated our plans. We were limited to documenting what was known about identifying shock on Earth based on reviewing the literature and extrapolating recommendations for the mission team. We hypothesized that Perseverance instruments could measure and identify shock pretty straightforwardly. After all, we gathered nearly four decades worth of work on shock effects in Martian meteorites, terrestrial impact craters, and experimentally shocked minerals.

But, it proved to be much more challenging than we expected to use terrestrial laboratory shock studies to guide Perseverance in excluding shocked samples from its caching strategy. The studies we examined were performed in state-of-the-art facilities, and largely using optical instrumentation, a primary lab tool to characterize shock on Earth. This type of analysis also relies on the use of thin sections to view shock features in a single, thin crystal by observing how light passes through it. Thin sections cannot (yet) be made on Mars. And although impact cratering may impart a unique set of deformation features to minerals (Pickersgill et al. 2021), these features do not always change the rock’s texture at a scale that the rover’s optical imagers would see.

Perhaps a bigger complication is that it won’t be optical techniques, but spectroscopy instruments that will actually have the best chances of identifying shock on Mars. Perseverance has two spectroscopy instruments, SuperCam and SHERLOC (Scanning Habitable Environments with Raman and Luminescence for Organics and Chemicals), which both offer a suite of spectroscopy capabilities, including infra-red (IR) and Raman spectroscopy (Farley et al. 2020). Spectroscopy can reveal vibrational spectral signatures associated with the change from crystalline to amorphous materials, a transition usually associated with shock events.

Feldspar occurs in three "ideal" forms with exact endmember compositions, where either sodium, potassium, barium, or calcium fit into sites in a lattice of aluminum, silicon, and oxygen. In ideal feldspars, Raman spectral bands turn broader and flatter with increased shock pressure and temperature as the lattice becomes amorphous.

But nature is rarely ideal. Natural feldspar compositions vary, meaning they have differing mixtures of sodium, potassium and calcium in the lattice sites. Each composition has slightly different Raman spectral band positions. That means that a spectrum of a shocked feldspar with an endmember composition could get confused for one that is unshocked but just chemically distinct from its known ideal endmembers. This means that Raman band parameters, in the absence of additional compositional data, are unreliable indicators of shock extent: Raman is “necessary but not sufficient” (Pasteris and Wopenka, 2003).

When I came across this result, I was discouraged. Would Perseverance realistically be able to see shock effects in Jezero crater rocks confidently enough to help make caching decisions?

Luckily, our fantastic team saw beyond these multiple challenges. And Perseverance is a rover that was built to do just that: persevere.

We took steps to solve this challenge in several major ways, outlined in our publication (Shkolyar et al. 2022). First, our efforts resulted in the most comprehensive compilation of Raman bands for unshocked endmember reference standards for plagioclase feldspars. This guide indicates if a feldspar with a particular composition is shocked based on deviation from reference values. Secondly, we created a wish list of how additional studies, performed both on the rover payload and in terrestrial labs, could define better shock identification protocols for spectroscopy instruments. This wish list calls upon the research community to carry out much-needed work on shock identification not only in feldspars, but also in the vast variety of other abundant rocks that will be encountered by rovers, such as clays and carbonates. Finally, our work opens up new avenues for further studies on identifying shock effects in situ on Mars or other rocky solar system bodies.

After MSR is successfully completed, which is currently planned to occur as early as the 2030s, studies on returned samples will allow us to understand how good our shock predictions were. These results may even feed into future returned sample missions and improve their in situ shock identification capabilities.

Prof. of Analytical Chemistry, University of the Basque Country, UPV/EHU 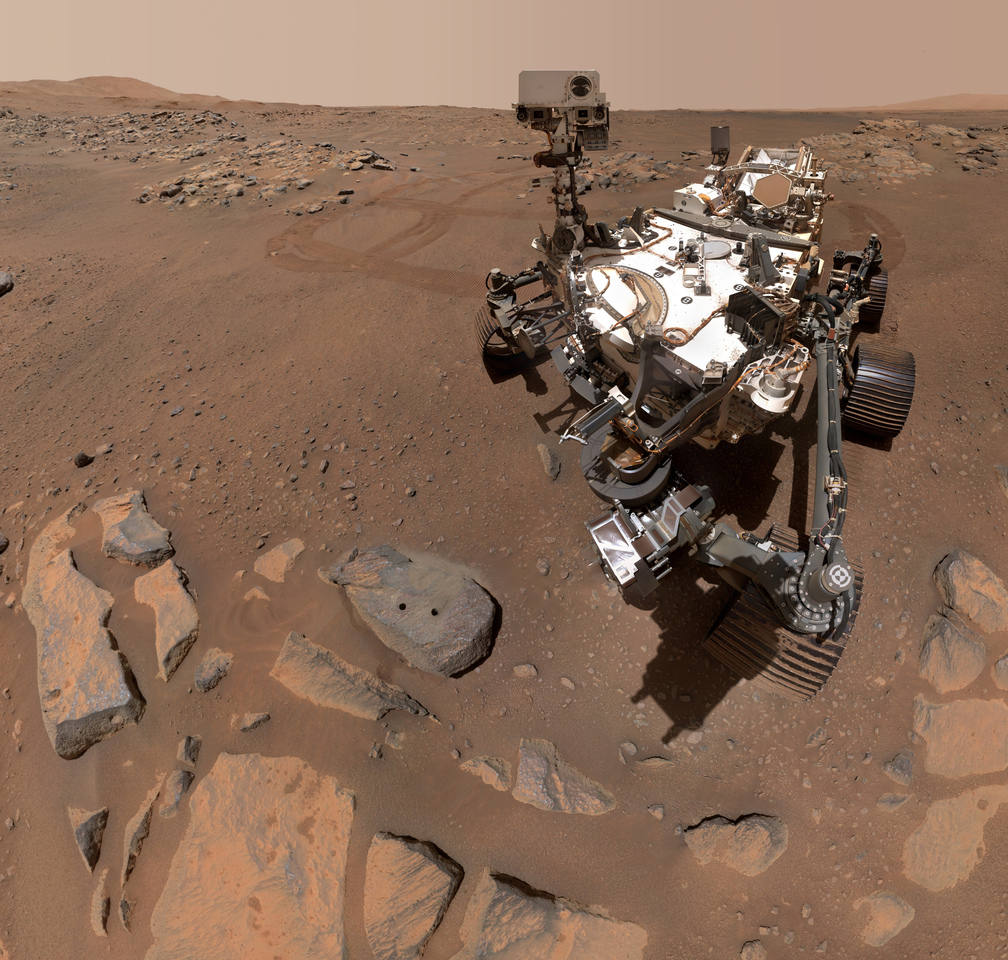 For the first time in history, a NASA Mars rover is examining and carefully selecting samples to be brought back to Earth. But, most of Mars' surface has experienced shock from asteroid impacts. What are the consequences for studying shocked Martian rocks in Earth labs? Our team set out to find out.